The War Zone has released more information about a mysterious drone encounter in controlled airspace in Tucson, Arizona, on the night of Feb. 9.

The Customs and Border Protection, or CBP, and the Tucson Police Department’s Air Support Unit tracked an unidentified drone that evaded both agencies’ helicopters. The FBI released a statement indicating it was a “highly modified drone.”

A source with direct knowledge of the incident told The War Zone the drone was “highly unlikely to be battery-powered based on the altitude, distance, and speed at which it flew.” The source said the drone was equipped with high-tech sensors, such as an infrared camera, to operate at night. They added it’s “only logical that it was looking towards DM’s [Davis Monthan AFB] flight line” based on its location.

The source said the drone penetrated Class C airspace surrounding the US Air Force’s Davis-Monthan Air Force Base, 5 miles south-southeast of downtown Tucson, Arizona, and was hovering near a complex of fuel tanks west of Runway 12.

“The description of the drone’s initial observed location would appear to match the location of a terminal owned by Kinder Morgan, an energy company that operates fuel pipelines and other energy infrastructure,” The War Zone said. About 40% of all natural gas flows through Kinder Morgan’s pipes.

A user of JetCareers.com wrote on the online airline community, dated Feb. 10, about the drone’s initial observed location:

Last night, there was one just east of KTUS at about 1200′ AGL cruising eastbound. It passed about 30′ away co-altitude with a police helicopter flying the opposite direction. Helo made a 180 turn to give chase. The quad copter was described as approximately 5 feet long by about 3 feet wide, with a single green flashing LED light. It continued east into KDMAs airspace and began orbiting the base over the parallel taxiway near the fighter jet ramp. TUS and DMA towers were unaware of it, as was U90 [an FAA approach tower] controllers. The operator apparently realized by this time that the drone was being followed, because it then proceeded northwest at high speed and climbing, with the helo and another LE helo in trail. The copter began to climb and flew out of the TUS area about 50 miles to the northwest of town into the middle of nowhere desert out by the mine west of KAVQ. It was last seen climbing through 14,000′ and into the undercast, where it disappeared. The helos remained in VMC [Visual Meteorological Conditions] obviously, and one hung around for about an hour, to see if it would reappear descending, or if there was any vehicles driving through the middle of nowhere as either the operator or someone to potentially recover it. Neither appeared. U90 informed their FAA chain of command about it, but that’s as far as I’ve heard so far.

Interesting in both the range and the altitude, both control-wise in terms of line of sight, as well as battery life as it comes to the endurance of the thing. The concerns with it being around air traffic and a near mid-air, as well as it being over an Air Force base with security-sensitive aircraft, are all concerning. Definitely not something commercial off-the-shelf that one would buy at the local store. 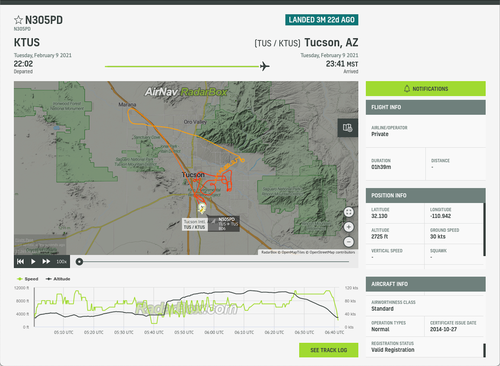 Whatever the drone was, it had enough power to evade two helicopters, each capable of 150-180 mph.

Considering all the supply chain disruptions happening in the country, we wonder if an adversary state operating within the US or in Mexico was planning an attack on the Kinder Morgan terminal or surveilling Davis Monthan AFB.

Similar incidents have been reported over America’s largest nuclear power and near other sensitive structures.