Authored by Jeff Carlson and Hans Mahncke via The Epoch Times,

Newly released notes taken by high-level Department of Justice (DOJ) officials during a March 6, 2017, meeting with FBI leadership expose some of the lengths the FBI engaged in to cover up its spying on the 2016 campaign of President Donald Trump. 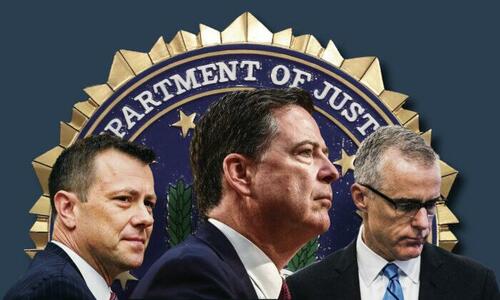 The notes were released on May 8 by lawyers representing former Hillary Clinton campaign lawyer Michael Sussmann as part of an effort to clear him on charges of having lied to the FBI. The notes, in reality, appear to do little to exonerate Sussmann but do provide quite a bit of information on the FBI.

The meeting at which the notes were taken took place just two days after Trump’s March 4, 2017, tweet in which he accused former President Barack Obama of having wiretapped Trump Tower. Trump’s tweet panicked FBI leadership, who were unsure exactly how much Trump knew about their efforts to tie him up with Russia collusion allegations.

What the notes reveal is that in response to the tweet, they tried to cover their tracks.

By March 2017, FBI leadership already knew with near-certainty that the Trump–Russia collusion claims were a hoax. They knew that Clinton’s campaign had a plan to vilify Trump by portraying him as a puppet of Putin. The FBI also knew that not a single claim in the so-called Steele dossier—which was the primary source of allegations of Trump–Russia collusion—had checked out. 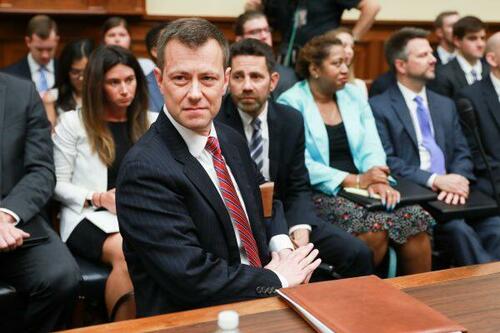 FBI agent Peter Strzok during testimony before Congress on July 12, 2018. Strzok oversaw both the FBI’s investigation into Hillary Clinton’s use of a private email server and the counterintelligence investigation into Donald Trump’s campaign. (Samira Bouaou/The Epoch Times)

In fact, at that point, the FBI had already spent three days interviewing Steele’s primary source, Igor Danchenko, who disavowed pretty much every claim in Steele’s dossier. The FBI also knew that the Alfa Bank story, which claimed that a Trump server was communicating with a Russian bank—information that had been brought to them by Sussmann—was bogus.

In short, the FBI knew that all the claims of Trump-Russia collusion had proven to be fake.

But things took a sudden and dramatic turn on March 4, 2017, when Trump said on Twitter that he knew that Obama had wiretapped Trump Tower, a very public claim of spying that set off alarm bells with both FBI and DOJ leadership. Trump’s tweet so alarmed these DOJ and FBI officials that the topic dominated a meeting two days later that included FBI Deputy Director Andrew McCabe and the acting U.S. attorney general, Dana Boente.

The problem for the FBI was this: They didn’t know how much Trump actually knew about their actions. Just a day earlier, on March 3, 2017, radio host Mark Levin had reported that the Obama administration had obtained Foreign Intelligence Surveillance Act (FISA) warrants that involved Trump and several of his campaign advisers. Levin also reported that Trump’s off-the-cuff joke in July 2016—“Russia, if you’re listening, I hope you’re able to find the 30,000 emails that are missing”—had become the basis for the Russia collusion accusations.

But as we now know, the FISA warrants weren’t the only thing that the FBI leadership was involved with. The FBI was actively spying on the Trump campaign and the incoming Trump administration’s transition communications, a fact that also was revealed in the new notes. The FBI had not only spied on Trump campaign adviser Carter Page, but also on another aide, George Papadopoulos, going so far as to lure him to London, where they tried to set him up in a clumsy but elaborate sting. 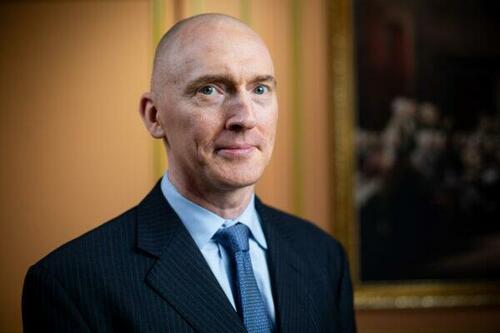 There were also the new fake accusations brought forward by Sussmann that Trump was tied to the use of a Russian Yota phone. And there was the matter of tech executive Rodney Joffe–a man with deep ties to the FBI–who had been using his access to non-public data to spy on Trump both at Trump Tower and at the White House.

In all likelihood, Trump probably only knew what Levin had reported the day before–that there was a FISA warrant on a campaign aide–but the FBI leadership didn’t know how much Trump knew and had to assume that he knew a lot more.

The discussion at the March 6 meeting was dominated by Trump’s tweet, with the FBI’s McCabe kicking things off by stating that the bureau was trying to determine what was behind Trump’s tweets.

Notes at the meeting were taken by three DOJ officials—Tashina Gauhar, Mary McCord, and Scott Schools. The notes were released because one of the notes appears to show that McCabe stated that Sussmann had represented clients when he took the Alfa Bank allegations to the FBI. Sussmann initially told the FBI that he didn’t represent anyone and was merely acting as a good samaritan. It’s that lie to the FBI by Sussmann that he has been charged with and Sussmann’s lawyers are hoping to sow doubt by introducing that single sentence that appears to say otherwise.

This claim by Sussmann’s lawyers, however, is, in essence, a side-show as the notes are double-hearsay evidence written six months after Sussmann told the FBI the exact opposite. 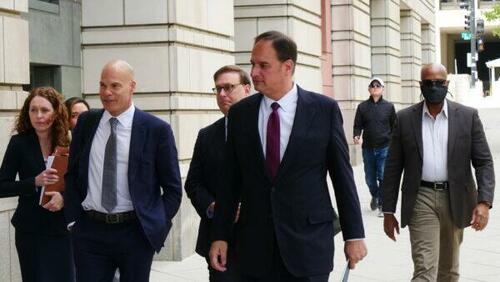 Michael Sussman (C) arrives for a court hearing at a federal courthouse in Washington on April 27, 2022. (Oliver Trey/The Epoch Times)

The real bombshells are in the many pages of notes that Sussmann doesn’t cite; those notes reveal the true extent of the FBI’s panic over Trump’s tweet. The first reaction from FBI leadership appears to have been to tell the acting attorney general, Boente, a sequence of lies about their investigation.

The notes reveal that the FBI repeatedly referred to Steele’s dossier as “Crown reporting,” suggesting the dossier represented some sort of official UK government intelligence, when it was mostly information made up by Steele and Danchenko–a fact the FBI already knew at the time.

The new notes also revealed that FBI agent Peter Strzok lied to his DOJ superiors about what triggered Alexander Downer, the Australian ambassador in London, to come forward to the FBI with information regarding his meeting with Papadopolous. It has always been the FBI’s official story that it was Downer who initiated the official Trump–Russia investigation, but that story is now undermined in the new notes, in which Strzok claims that it was Trump’s joke about Russia finding Clinton’s emails that had triggered Downer.

In truth, Downer had come forward before Trump had even made the joke.

The FBI also lied to the DOJ about the Carter Page FISA warrant, which they claimed was “fruitful,” when it actually had revealed nothing nefarious–something that the FBI was aware of by this time. 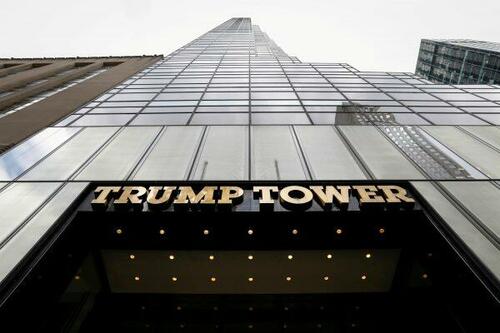 The FBI appears to have also tried to misrepresent and elevate the Alfa Bank allegations by claiming that the Trump Organization had sent a solicitation to Alfa Bank. Again, this was completely false. The FBI knew within days of Sussmann giving them the Alfa Bank data that it was useless and probably fake.

By Sept. 23, 2016, the FBI’s IT team had disproven the Alfa Bank allegations. But rather than admit that, the FBI actually tried to breathe new life into the Alfa allegations through its misrepresentations.

All of these exculpatory facts were not just hidden from interim DOJ officials at the March 6, 2017, meeting, FBI leadership twisted those facts to make them appear like there was a strong case against Trump when they knew there was no case at all.

But the March 6 meeting was only the beginning. Knowing that Trump might now be on to them, FBI leadership immediately increased their efforts to cover their own tracks by intensifying the focus on Trump.

On March 5, 2017, the day following Trump’s tweet, former Director of National Intelligence James Clapper went on CNN and claimed that there was no “wiretap activity mounted against the President-elect at the time, or as a candidate, or against his campaign.”

While Clapper took a defensive stance, the FBI soon went on offense and the bureau’s efforts began almost immediately.

On March 15, 2017, FBI Director James Comey suddenly decided to brief the leaders of the Senate Judiciary Committee, Sens. Chuck Grassley (R-Iowa) and Dianne Feinstein (D-Calif.), about the Carter Page FISA application, which FBI leadership believed Trump had found out about. Comey would provide them with copies of the actual FISA warrant two days later. At this same time, Comey also began his briefing of the congressional Gang of Eight—the eight individuals within the U.S. Congress who are briefed on classified intelligence matters by the executive branch—regarding the Page FISA. 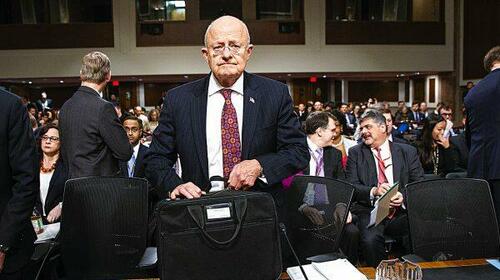 On March 20, 2017, Clapper suddenly changed his narrative, shifting from denying the existence of any spying to denying any abuse of the FISA process.

Also on March 20, Comey publicly testified to Congress, revealing for the first time the existence of the FBI’s Crossfire Hurricane investigation into Trump and his campaign.

During his testimony, Comey inadvertently acknowledged that he had also intentionally withheld the required congressional Gang of Eight notification of the FBI’s counterintelligence investigation. Under questioning, Comey stated that he did so because of “the sensitivity of the matter.”

The combined efforts of Obama intelligence officials and the FBI would soon culminate in the appointment of special counsel Robert Mueller, which essentially tied up Trump for the next three years. And in doing so, they ensured that little or no progress was made in bringing the actual perpetrators of the Russia hoax to justice.