New US COVID Cases Tumble Despite 25% Drop In Daily Vaccinations

Following almost two months of roughly flat-lining new Covid cases in the US, we are now again seeing clear signs of new improvement despite a notable slowdown in covid immunizations.

In recent days, many in the administration and its media propaganda arm, have tried to spook the broader population with scary stories that the recent pace of vaccinations will slow down sufficiently to prevent herd immunity from being reached, hoping to force any holdouts to get vaccinated. As a reference, as of Monday, the US population has received ~246M vaccines, or ~45% of the doses needed for full vaccination of the entire 12+ yo population (assuming two doses are needed for full vaccination).

Here are the facts: as Morgan Stanley notes, since the J&J pause (which has since been reversed), 7-day average daily vaccinations have declined by ~26% (3.4M to 2.5M). 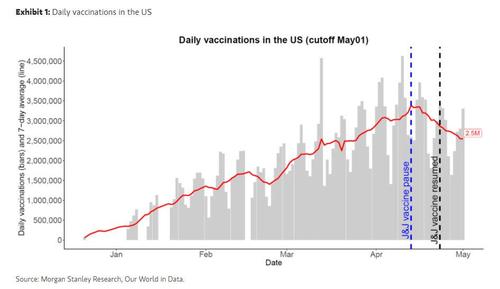 However, it’s not all just J&J: as Morgan Stanley’s Matthew Harrison notes next, along with the decrease in the rate of J&J vaccine administration starting on April 13th, the administration rate of the other two available vaccines in the US (by Pfizer/BioNTech and Moderna) has also declined. Specifically, while use of the J&J vaccine has declined ~85% from the date of the pause in use, use of the Pfizer vaccine is down ~18% (~18% from peak) and use of the Moderna vaccine is down ~11% (~18% from peak). Therefore, the recent reduction in the total vaccination rate in the US is driven by a decrease in the administration rate of all available vaccines in the US. 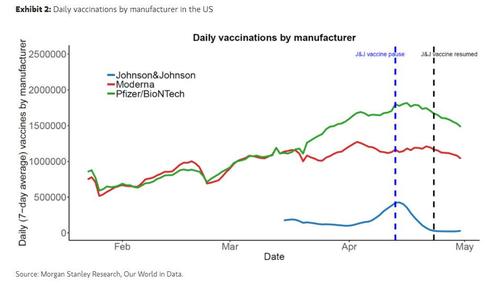 While Harrison hopes the trend can stabilize, he doesn’t expect a quick reversal, as the J&J pause clearly has had an impact on the vaccination rate. Still, despite the pause, ~50% of US adults have received their first shot, penetration which is similar to the rate of willingness among the population. As shown in Exhibit 3, the rate of google searches for expressions related to vaccination (“covid vaccine” and “covid vaccine appointment”) had already started to decrease in early April and, if google trends represent a leading factor of the daily vaccinations (similar to what we had seen with the number of cases in our previous notes, e.g. here), then one would expect a reduction in the number of daily vaccinations sometime in mid-April. 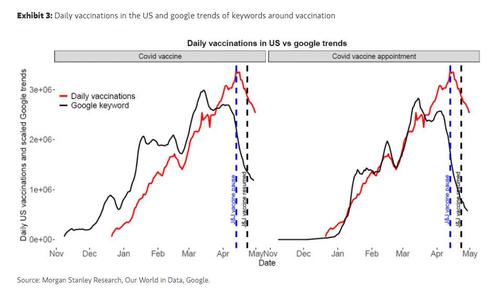 As noted above, Morgan Stanley concludes that “without stabilization, our broad vaccination target by mid-summer as we discuss here could be at risk.”

That’s the bad news. The good news is that the slowdown in the rate of vaccinations is not leading to an increase in new cases: as BofA notes, the 7-day average of new cases declined 31% over the past 18 days without being influenced by holiday related changes in testing activity. 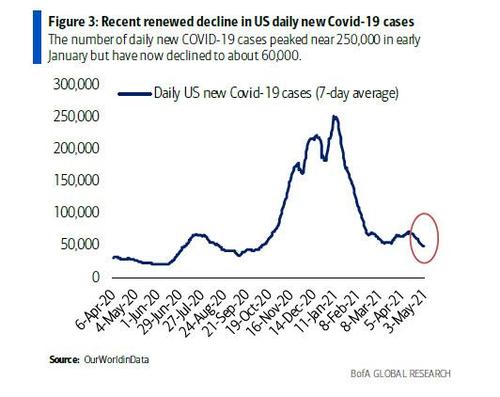 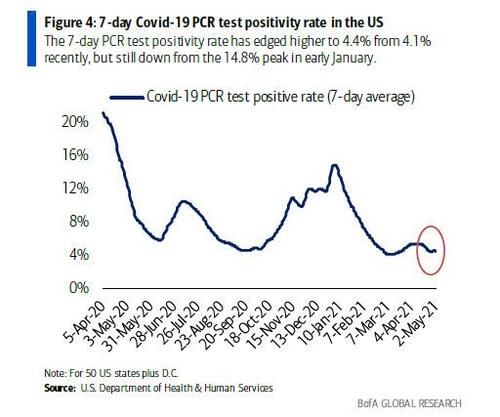 According to BofA, “in the past, data like that were reliable indicators of the beginning of significant and persistent improvement in the US Covid-19 situation.”

But the clearest indication that any vaccine-related scaremongering is just that, is that the University of Washington’s IHME Covid-19 model continues to forecast that daily infections then roughly halves monthly a few times after the turning point, and eventually shrinking to virtually nothing by the late summer. 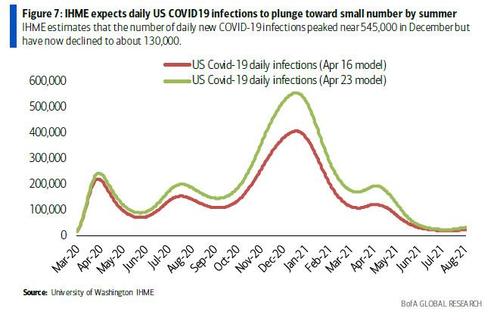