The footage, shot by Adriana Sarmiento and Roberto Castillero, two tourists staying in a nearby hotel, initially heard a loud bang minutes before the 12-story condominium building collapsed. They grabbed their smartphones and headed to the parking garage.

They found water pouring out of the ceiling and concrete breaking apart inside the build’s underground parking garage. This is yet another clue that structural deficiencies may have played a part in the collapse, outlined in a prior engineering field report. 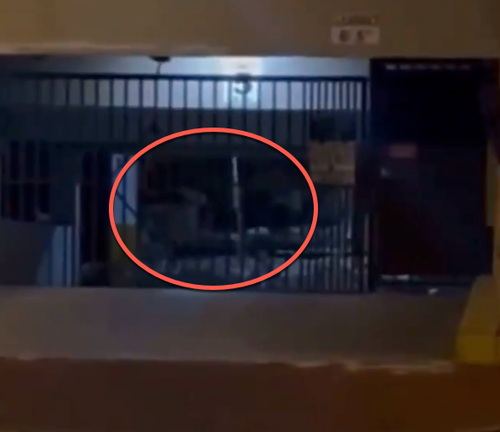 Adriana Sarmiento told ABC News they went to investigate the loud bang. She captured video around 0118 ET Thursday, minutes before the collapse.

#Surfside Adriana Sarmiento was swimming in the pool at Bluegreen Vacations Solara Surfside Resort when she heard a loud noise. She went out into the street to investigate & recorded water flowing from the parking garage & rubble on the ground.
Video was recorded @ 1:18 a.m. 👇🏽 pic.twitter.com/HVBgF2xeRd

Video shows debris and water gushing in the parking garage of the Surfside condo minutes before it collapsed.

Sarmiento said she tried to warn residents who were on their balconies about the danger. But it was too late to evacuate the building as the next thing the couple saw was “dust, and then, glass, rock, and then I started running for my life,” Castillero said.

It took the couple a few minutes for them to realize what happened, but after they came to their senses, a massive pile of rubble and debris was the only thing left of the tower.

“I said, ‘Where are the people on the balcony?’ ” Castillero said. “I did not realize that the balcony was not there.”

“For me, it’s been very difficult thinking of everyone who lived there,” she said.

As of Wednesday evening, the death toll climbed to 18 with 145 people unaccounted for, according to local Surfside officials.

President Joe Biden and Jill Biden plan to travel to the condo site in Surfside, Florida, to offer their condolences to families as the number of deaths is expected to soar.