No, Justices Did Not Commit Perjury In Their Confirmation Hearings When Asked About Roe

The response to the leaked draft opinion overturning Roe v. Wade has unleashed a torrent of outrage on the left. 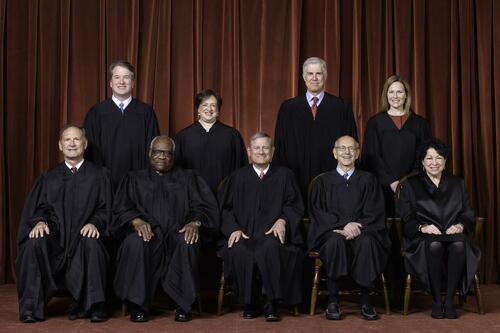 While many are calling for marches and sweeping new legislation, some are focused on calling out the justices in the majority for alleged “perjury” or “lying” in their confirmation hearings, particularly Justices Samuel Alito, Brett Kavanaugh, and Neil Gorsuch. In reality, they did not lie in testimony in referencing Roe as established precedent.

The suggestion of perjury is utter nonsense.

In the draft opinion written by Justice Alito declares “We hold that Roe and Casey must be overruled. It is time to heed the Constitution and return the issue of abortion to the people’s elected representatives.”

Sen. Susan Collins (R., Me.) publicly decried what she claimed were false or misleading answers on Roe by Justices Alito and Kavanaugh.

No less a legal figure as Stephen Colbert declared “They knew, that if they were honest, they wouldn’t get the job. So they lied, which I think is perjury. But what do I know? I’m no Supreme Court justice, I’m not a good enough liar.”

In recent hearings, some of us have criticized Democratic members in demanding assurances on how nominees would vote on particular cases or issues. However, both Democratic and Republican nominees have largely stuck to rote responses on Roe and other cases to refuse to make such commitment. As Justice Ruth Bader Ginsburg famously insisted, there would be “no forecasts, no hints.”

The problem is that politicians often display a type of selective auditory attention problem: they hear what they want to hear. Indeed, confirmation hearings are highly choreographed on both sides. Each senator seeks to secure a thirty-second clip showing that he or she secured assurances or trashed a nominee.

For pro-choice senators like Sen. Collins, it is essential to have some answer that would support a claim that, despite seemingly antagonistic judicial philosophical views, a nominee would not likely overturn Roe v. Wade and Planned Parenthood v. Casey.

Notably, however, these same senators have supported the Ginsburg Rule, which is customarily cited to refuse to make promises or predictions on votes. Indeed, I have long been a critic of the rule because it is used to refuse to even discuss judicial philosophy. So nominees now just restate elementary points of judging without saying anything of substance.

Most of those crying “perjury” do not cite the specific perjurious language.

Many of us said when Alito was nominated that he was presumptively opposed to the logic of Roe. After all, in 1985, Alto wrote as a Justice Department lawyer that the Constitution does not contain a right protecting abortions.

However, appearances had to be observed.

The late Sen. Arlen Specter (R., Pa.), asked him if he agreed with that statement today and Alito responded in classic confirmation nonspeak. He first repeated the facts (by noting that he was a Justice Department attorney at the time) and then went rote: “Today if the issue were to come before me. The first question would be the question that we’ve been discussing and that’s the issue of stare decisis. And if the analysis were to get beyond that point, I would approach that question with an open mind.”

That says absolutely nothing but how every jurist approaches case precedent. You begin with the touchstone of stare decisis and the preference for preserving precedent. You then approach the countervailing question with “an open mind.”

When Sen. Dick Durbin (D., IL.) pressed him on whether Roe is “settled law,” Alito responded again by stating the obvious:

Roe v. Wade is an important precedent of the Supreme Court. It was decided in 1973. So, it’s been on the books for a long time. It has been challenged in a number of occasions. And I discussed those yesterday. And the Supreme Court has reaffirmed the decision–sometimes on the merits; sometimes, in Casey, based on stare decisis. And I believe when a decision is challenged and it is reaffirmed, that strengthens its value as stare decisis. For at least two reasons…

That again says nothing. Indeed, it was decided in 1973 and that is a long time ago.  Plessy v. Ferguson was on the books for 58 years before it was overturned in 1958. It was also supported by stare decisis but it did not matter.

He never pledged to preserve Roe. Even if he did, he never promised that he would never change his mind on such cases.

I testified in the Gorsuch hearing and he was widely viewed as a Roe skeptic. After all, he wrote a book that declared the “the intentional taking of human life by private persons is always wrong.”

When asked about that statement in the context of Roe, Gorsuch responded: “Senator, as the book explains, the Supreme Court of the United States has held in Roe v. Wade that a fetus is not a person for purposes of the Fourteenth Amendment.”

When Durbin asked if he accepted that, Gorsuch stated another truism: “That’s the law of the land. I accept the law of the land, senator, yes.” In other words, he accepted that Roe is the established precedent. That is about as earthshaking as saying he accepts that the Supreme Court sits in Washington.  Likewise, then-senator Al Franken asked if Gorsuch he viewed Roe as “settled law.” Again, that is like asking for the location of the Supreme Court. Gorsuch declared “It is absolutely settled law.”

Kavanaugh also stated the obvious in calling Roe “important precedent” and noting that the Court strives to preserve precedent. When pressed by Sen. Dianne Feinstein (D., Cal.), he again said that such cases are “entitled the respect under principles of stare decisis” and “one of the important things to keep in mind about Roe v. Wade is that it has been reaffirmed many times over the past 45 years, as you know, and most prominently, most importantly, reaffirmed in Planned Parenthood v. Casey in 1992.”

Kavanaugh succeeded in repeating nothing but verbal nullities.

The one exception to this pattern of confirmation nonspeak was Barrett. At the time, I wrote that Barrett was refreshingly and surprisingly honest about her judicial philosophy and approach to Roe. She specifically rejected the claim that Roe constitutes “super precedent.” Barrett said that this term “define[s] cases that are so well settled that no political actors and no people seriously push for their overruling. And I’m answering a lot of questions about Roe, which I think indicates that Roe doesn’t fall in that category.” (Notably, Judge Ketanji Brown Jackson took the same position against Roe as super precedent.).

What is most striking about these claims that the justices lied is that most of these critics insisted during their confirmations that they were clearly antagonistic toward Roe. Nothing that they said changed any minds on their judicial philosophy as hostile to the logic of Roe.

Notably, liberal nominees have used the same language about cases like District of Columbia v. Heller, supporting gun rights. They acknowledge that it is a settled precedent but that does not guarantee that they will vote to preserve it. Indeed, they have voted to limit or overturn past cases with which they disagree. No one called for perjury prosecutions or denounced them as liars.

None of this is likely to matter in the echo-chambered news today, particularly with the approaching midterm elections. That is why Bismarck warned that “people never lie so much as after a hunt, during a war or before an election.”