La Niña conditions are emerging for the second consecutive winter, impacting the weather across the U.S. in the coming months. The National Oceanic and Atmospheric Administration’s (NOAA) Climate Prediction Center (CPC) announced Thursday its seasonal outlook for winter from December 2021 through February 2022.

NOAA’s 2021 Winter Outlook outlines wetter-than-average conditions for the Northern U.S., mainly in the Pacific Northwest, northern Rockies, Great Lakes, Ohio Valley, and western Alaska. The report said widespread drought in the western half of the U.S. would continue to be monitored.

“Consistent with typical La Nina conditions during winter months, we anticipate below-normal temperatures along portions of the northern tier of the U.S. while much of the South experience above-normal temperatures,” said Jon Gottschalck, chief of CPC.

“The Southwest will certainly remain a region of concern as we anticipate below-normal precipitation where drought conditions continue in most areas,” Gottschalck said.

NOAA’s temperature outlook for the States: 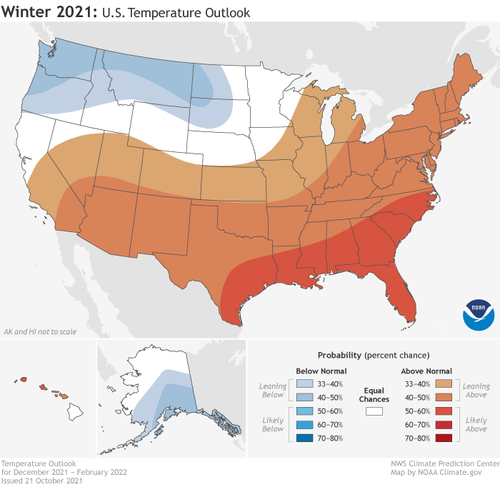 The potential development for a double-dip La Niña will also influence precipitation outlooks: 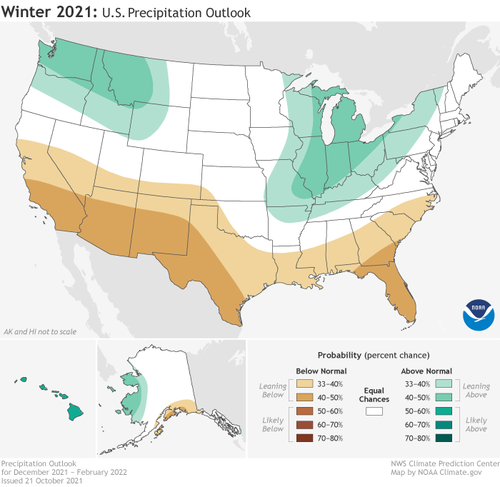 To sum up, La Niña conditions will push the jet stream further north, which leads to a drier and warmer pattern across the Deep South to Southeast. This doesn’t mean those areas won’t be hit with Arctic blasts, similar to what nearly collapsed Texas’ power grid in February. The Lone Star State appears to be taking no chances this year and next as it warned power companies to brace for cold snaps and upgrade systems to avoid blackouts.