Nord Stream 2 ‘Deal’ Is Not An American Concession, It’s Admission Of Defeat

Via The Strategic Culture Foundation,

All in all, Washington’s virtue-signaling is one helluva gas! 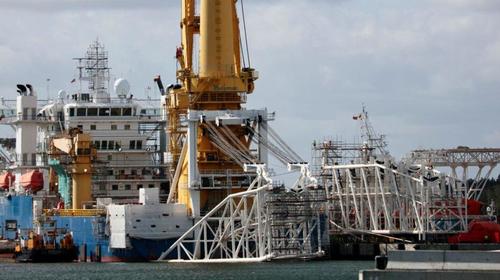 After much arm-twisting, bullying and foghorn diplomacy towards its European allies, the United States appears to have finally given up on trying to block the giant Nord Stream 2 project with Russia. What an epic saga it has been, revealing much about American relations with Europe and Washington’s geopolitical objectives, as well as, ultimately, the historic decline in U.S. global power.

In the end, sanity and natural justice seem to have prevailed. The Nord Stream 2 pipeline under the Baltic Sea will double the existing flow of Russia’s prodigious natural gas to Germany and the rest of Europe. The fuel is economical and environmentally clean compared with coal, oil and the shale gas that the Americans were vying with Russia to export.

Russia’s vast energy resources will ensure Europe’s economies and households are reliably and efficiently fueled for the future. Germany, the economic engine of the European Union, has a particular vital interest in securing the Nord Stream 2 project which augments an existing Nord Stream 1 pipeline. Both follow the same Baltic Sea route of approximately 1,222 kilometers – the longest pipeline in the world – taking Russian natural gas from its arctic region to the northern shores of Germany. For Germany’s export-led economy, Russian fuel is essential for future growth, and hence benefiting the rest of Europe.

It was always a natural fit between Russia and the European Union. Geographically and economically, the two parties are compatible traders and Nord Stream 2 is merely the culmination of decades of efficient energy relations.

Enter the Americans. Washington has been seething over the strategic energy trade between Russia and Europe. The opposition escalated under the Trump administration (so much for Trump being an alleged Russian stooge!) when his ambassador to Germany, Richard Grenell, fired off threatening letters to German and other European companies arrogantly warning that they would be hit with sanctions if they dared proceed with Nord Stream 2. Pipe-laying work was indeed interrupted last year by U.S. sanctions. (So much for European sovereignty and alleged meddling in internal affairs by Russia!)

The ostensible American rationale was always absurd. Washington claimed that Russia would exploit its strategic role as gas supplier by extracting malicious concessions from Europe. It was also claimed that Russia would “weaponize” energy trade to enable alleged aggression towards Ukraine and other Eastern European states. The rationale reflects the twisted Machiavellian mentality of the Americans and their supporters in Europe – Poland and the Baltic states, as well as the Kiev regime in Ukraine. Such mentality is shot-through with irrational Russophobia.

The ridiculous paranoid claims against Russia are of course an inversion of reality. It is the Americans and their European surrogates who are weaponizing a mundane matter of commercial trade that in reality offers a win-win relationship. Part of the real objective is to distort market economics by demonizing Russia in order for the United States to export their own vastly more expensive and environmentally dirty liquefied natural gas to Europe. (So much for American free-market capitalism!)

Another vital objective for Washington is to thwart any normal relations developing between Russia and the rest of Europe. American hegemony and its hyper-militaristic economy depend on dividing and ruling other nations as so-called “allies” and “adversaries”. This has been a long-time necessity ever since the Second World War and during the subsequent Cold War decades, the latter constantly revived by Washington against Russia. (So much for American claims that Russia is a “revisionist power”!)

However, there is a fundamental objective problem for the Americans. The empirical decline of U.S. global power means that Washington can no longer bully other nations in the way it has been accustomed to doing for decades. The old Cold War caricatures of demonizing others have lost their allure and potency because the objective world we live in today simply does not make them plausible or credible. The Russian gas trade with the European Union is a consummate case in point. In short, Germany and the EU are not going to shoot themselves in the foot, economically speaking, simply on the orders of Uncle Sam.

President Joe Biden had enough common sense – unlike the egotistical Trump – to realize that American opposition to Nord Stream 2 was futile. Biden is more in tune with the Washington establishment than his maverick predecessor. Hence Biden began waiving sanctions imposed under Trump. Finally this week, the White House announced that it had come to an agreement with Germany to permit Nord Stream 2 to go ahead. The Financial Times called it a “truce” while the Wall Street Journal referred to a “deal” between Washington and Berlin. (Ironically, American non-interference is presented as a “deal”!)

The implication is that the United States was magnanimously giving a “concession” to Europe. The reality is the Americans were tacitly admitting they can’t stop the strategic convergence between Russia and the rest of Europe on a vital matter of energy supply.

In spinning the eventuality, Washington has continued to accuse Russia of “weaponizing” trade. It warns that if Russia is perceived to be abusing relations with Ukraine and Europe then the United States will slap more sanctions on Moscow. This amounts to the defeated bully hyperventilating.

Another geopolitical factor is China. The Biden administration has prioritized confrontation with China as the main long-term concern for repairing U.S. decline. Again, Biden is more in tune with the imperial planners in Washington than Trump was. They know that in order for the United States to have a chance of undermining China as a geopolitical rival the Europeans must be aligned with U.S. policy. Trump’s boorish browbeating of Europeans and Germany in particular over NATO budgets and other petty issues resulted in an unprecedented rift in the “transatlantic alliance” – the euphemism for American dominance over Europe. By appearing to concede to Germany over Nord Stream 2, Washington is really aiming to shore up its anti-China policy. This too is an admission of defeat whereby American power is unable to confront China alone. The bully needs European lackeys to align, and so is obliged to offer a “deal” over Russia’s energy trade.

All in all, Washington’s virtue-signaling is one helluva gas!