South Korea’s Joint Chiefs of Staff (JCS) said the two ballistic missiles were fired from the central part of North Korea, the first at 1234 and the second at 1239 local time. Both flew about 500 miles and at an altitude of 37 miles.

“North Korea fired two unidentified ballistic missiles from its central inland region toward the east coast, and intelligence authorities of South Korea and the United States are conducting detailed analysis for further information,” JCS said in a statement. 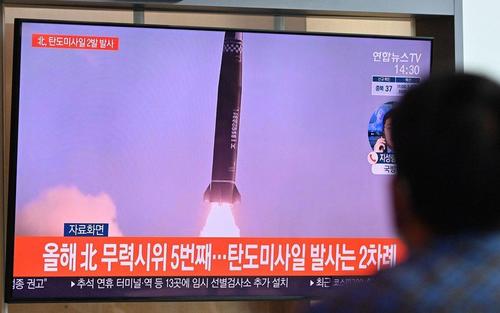 “We are aware of the missile launch and are consulting closely with our allies and partners. While we have assessed that this event does not pose an immediate threat to U.S. personnel or territory, or to our allies, the missile launch highlights the destabilizing impact of the DPRK’s illicit weapons program,” the USINDOPACOM statement read.

Hours after the missile launch, South Korean President Moon Jae-in observed a successful test-firing of a submarine-launched ballistic missile, making South Korea the eighth country to possess such a weapon.

Wednesday’s ballistic missile activity on the peninsula is North Korea’s first launch in six months. It also fired a new long-range cruise missile on Saturday and Sunday. One can only wonder about the timing of such an act, which usually happens with the explicit blessing of China, whose president – we learned yesterday – snubbed Joe Biden’s invitation for a face-to-face summit.

As we noted over the weekend, “Kim would not fire anything without Beijing’s blessing, so is this Xi piling on more pressure on Biden as Washington faces turmoil in almost every foreign policy endeavor.”

Last week, North Korea staged its first military-style parade since Biden became U.S. president. Kim presided over an event where displays of his state’s weaponry were scaled down from previous exhibitions. There were no ballistic missiles and possibly the reason for that is they were being prepared for launch.