Authored by Katabella Roberts via The Epoch Times,

North Carolina’s largest hospital systems made billions of dollars in profits during the pandemic, while simultaneously taking $1.5 billion in taxpayer-funded COVID-19 relief funds, according to a report released Wednesday by the state treasurer’s office. 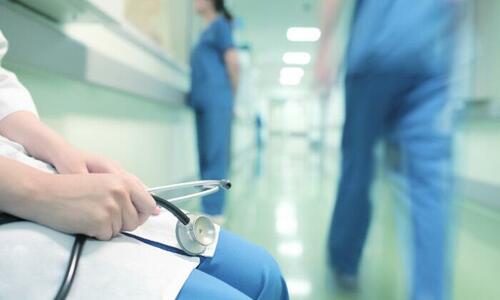 The report, titled, “North Carolina Hospital Systems Profit During COVID” was published by State Treasurer Dale Folwell who called on the hospital systems to “use their profits to lower costs for patients” or “return unnecessary, taxpayer-funded relief dollars.”

According to the report, Atrium Health, Cone Health, Duke Health, Novant Health, UNC Health, Vidant Health, and WakeMed made a combined $5.2 billion in net profits in 2021 and recorded $7.1 billion in growth in cash and financial investments from 2019 to 2021.

Six of those hospital systems enjoyed higher net profits than in the years before the pandemic, the report states.

That growth came as the seven hospital systems reportedly took $1.5 billion in taxpayer-funded COVID relief meant to help support hospitals who were struggling through the pandemic, as well as another $1.6 billion in Medicare Accelerated and Advance Payments from 2020–2021.

“These systems boasted huge reserves, but they still took the bulk of the relief funds meant for struggling hospitals – and then failed to dedicate more than a fraction of their windfall to increasing charity care for their suffering patients,” Folwell said in a press release unveiling the report.

The report further found that despite their reported profits, the hospital systems shared little of it with disadvantaged patients, noting that a third of North Carolina hospitals spent less on charity care in 2020 during the peak of the pandemic.

Across 104 hospitals, charity care spending rose only $246.5 million from 2019 to 2020, while some hospitals increased billing of poor patients that were eligible for charity care.

Atrium Health sued hundreds of patients, according to the report.

“None of these nonprofit systems pay any property, income or sales taxes. Many failed to fully honor their charitable mission even when thousands of North Carolinians lost their businesses and their jobs during the pandemic.”

Folwell is urging the hospital systems to either return the taxpayer money or commit to reducing hospital price inflation. The Treasurer is also supporting the Medical Debt De-Weaponization Act which aims to bolster accountability, transparency and consumer protections on medical debt.

“We have a duty to hold hospital executives accountable for wrecking the financial health of thousands of patients and transferring wealth from citizens to them,” Folwell added.