In a time of soaring prices, central bank tightening has now become all the rage (except in Turkey of course which just surprised markets with a 1% rate cut, sending the lira plunging to all time lows), and one day after Brazil hiked rates by 1% to 6.25% with promises to do the same next month and even the Fed turning hawkish and revealing the taper will start “soon”, most likely in November (even if the first US rate hike is expected to come well in late 2022), overnight Norway’s central bank, the Norges Bank, become the first major Western central bank to raise interest rates following the onset of the coronavirus pandemic.

After cutting rates three times in 2020 due the economic fallout from the crisis, on Thursday Norway’s central bank unanimously decided to raise rates to 0.25% from zero, in line with expectations. 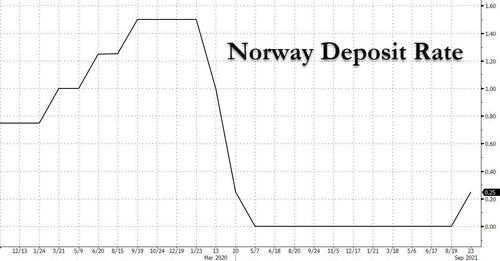 “The reopening of society has led to a marked upswing in the Norwegian economy, and activity is now higher than its pre-pandemic level. Unemployment has fallen further, and capacity utilisation appears to be close to a normal level,” the bank said in the statement.

“A normalising economy now suggests that it is appropriate to begin a gradual normalisation of the policy rate,” said Governor Oystein Olsen in a statement, adding that another rate hike is likely coming in December: “Based on the Committee’s current assessment of the outlook and balance of risks, the policy rate will most likely be raised further in December”.

The projected policy rate path was revised up from late-2022 onward, rising to 1.7% at end-2024. The decomposition shows higher inflation on the back of higher capacity utilization and a weaker krone accounting for most of the change since June (Exhibit 1). The Committee stressed that longer-term inflation expectations remain anchored and that the risk of inflation becoming too high is limited.

The updated economic projections in the Monetary Policy Report (MPR), which was also published today, show a larger positive output gap from 2022 onward, and the inflation outlook was revised up accordingly. Norges Bank now forecasts core inflation to reach 1.9% at the end of the forecast horizon, up from 1.6% in the June MPR.

Norway’s currency rallied to its highest levels since June, gaining 0.7% against the U.S. dollar. 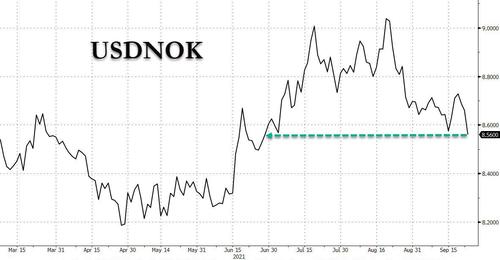