It was supposed to be the lowest payrolls report since December 2020 and… it was, but not how the market expected. With consensus expecting a 200K print (and whisper predicting much lower amid the mass tech layoffs), virtually nobody – not even Goldman – expected anything resembling a beat. And while we did in fact get the weakest print since Dec 2020 (and tied with March 2021), the report was a completely unexpected beat to expectations, coming in at +263K, this was a huge beat to expectations of 200K (the 7th consecutive beat) and just barely a drop compared to the upward revised 284K last month. 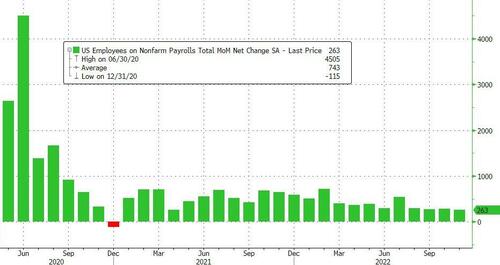 Monthly job growth has averaged 392,000 thus far in 2022, compared with 562,000 per month in 2021. In November, the biggest job gains occurred in leisure and hospitality (bartenders and waiters), health care, and government. Employment declined in retail trade and in transportation and warehousing.

As noted, this was the 7th consecutive payrolls beat of expectations in a row! 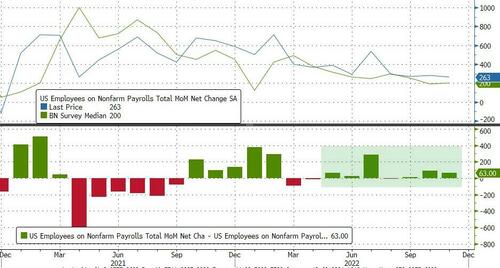 The unemployment rate was unchanged at 3.7% in November, in line with expectations, and has been in a narrow range of 3.5% to 3.7% since March. The number of unemployed persons was essentially unchanged at 6.0 million in November.  Among the major worker groups, the unemployment rates for adult men (3.4 percent), adult women (3.3 percent), teenagers (11.3 percent), Whites (3.2 percent), Blacks (5.7 percent), Asians (2.7 percent), and Hispanics (3.9 percent) showed little or no change over the month. (See tables A-1, A-2, and A-3.) 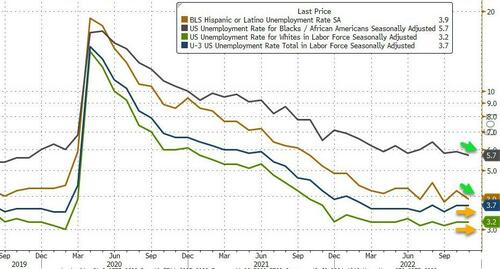 Both the labor force participation rate, at 62.1 percent, and the employment-population ratio, at 59.9 percent, were little changed in November and have shown little net change since early this year. 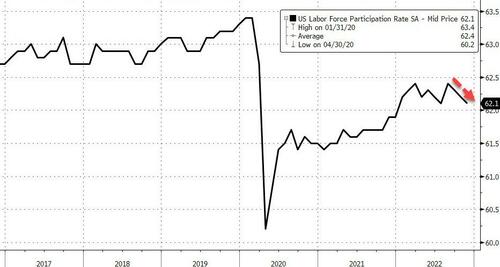 But what was the most troubling update is that wages came in red hot again, with average hourly earnings for all employees on private nonfarm payrolls rising by 18 cents, or 0.6%  to $32.82, double the expected 0.3% growth . Over the past 12 months, average hourly earnings have increased by 5.1% which was also above the 4.6% expected. 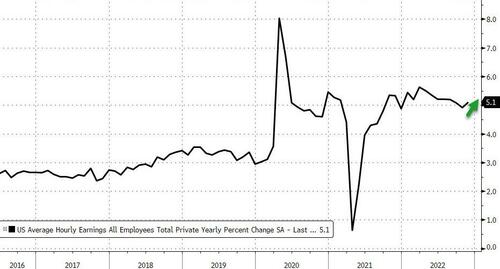 Here is Cornerstone Financial’s Cliff Hodge on the earnings data: “While the headline payrolls number was strong, the wage data is going to be eye-popping for the Fed. The 0.6% month-over-month wage growth number matched the highest level all year. Higher wages feed into higher inflation, which will no doubt keep pressure on the Fed and should increase expectations for the terminal rate. We got no help from the participation rate, which continues to move in the wrong direction and will keep competition for labor high until the economy inevitably rolls over sometime next year.”

Drilling down into the BLS’s establishment survey fabulation we get the following ridiculous modeled “data”:

And a visual heatmap of jobs courtesy of Bloomberg: 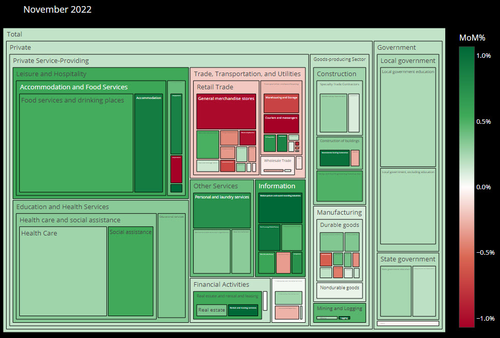 Needless to say this report, clearly politically motivated in light of everything else taking place in the economy, has put the Fed in a corner: while most other economic indicators scream recession, Biden’s last economic silver lining – the labor market – continues to come in far hotter than expected, and as such it forces Powell to keep tightening until such time as the bottom falls out of the economy and the US goes straight from expansion to depression, skipping recession completely.

Matt Maley, chief market strategist for Miller Tabak agrees: “The number one issue for the Fed has been wage inflation. Today’s much higher than expected data on average hourly earnings shows that it is still a big problem. This will prolong the Fed’s current tightening policy.”

As BBG economist Anna Wong notes, “The robust November jobs report reinforces a point Fed Chair Jerome Powell made in his Nov. 30 speech: Signs that wage growth is moderating are only ‘tentative.’ The resurgence of average hourly earnings growth shows labor shortages are still pressuring inflation, pushing back against the idea — supported by a few Fed officials, as indicated in the November FOMC minutes — that wage growth is cooling fast. Given the slow adjustment in the labor market, Fed officials will likely have to raise their terminal-rate forecast from what they wrote down in the September dot plot.”

And in keeping with the market reaction matrix we shared earlier, the kneejerk reaction for all risk assets – stocks, TSYs, gold, and crypto – is uniformly lower.