After Micron’s weaker market outlook dragged down semis (and tech) broadly on the day, Nvidia’s earnings after hours might provide some energy for a rebound in the broad market as it beat top-line expectations and its outlook was within the margin of error for expectations.

These were both better than expected as analysts had forecast $1.42 billion in gaming sales and $3.72 billion in data-center sales. 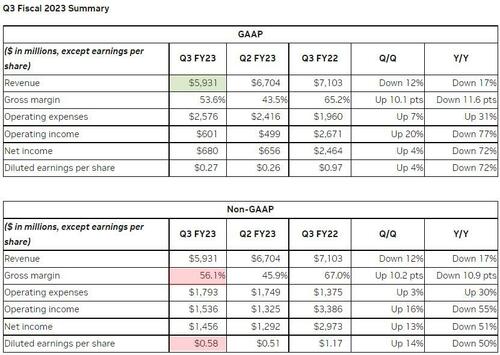 “We are quickly adapting to the macro environment, correcting inventory levels and paving the way for new products,” said Jensen Huang, founder and CEO of NVIDIA.

“The ramp of our new platforms – Ada Lovelace RTX graphics, Hopper AI computing, BlueField and Quantum networking, Orin for autonomous vehicles and robotics, and Omniverse – is off to a great start and forms the foundation of our next phase of growth.”

“NVIDIA’s pioneering work in accelerated computing is more vital than ever. Limited by physics, general purpose computing has slowed to a crawl, just as AI demands more computing. Accelerated computing lets companies achieve orders-of-magnitude increases in productivity while saving money and the environment,” he said. 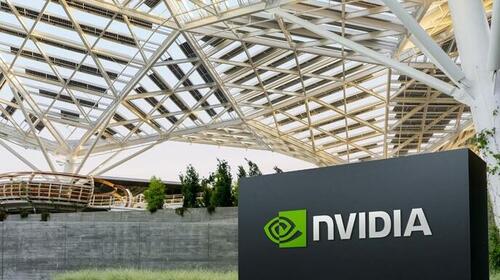 NVDA shares are still down on the day (after Micron’s pain-induced selloff during the day), having jumped 3-4% on the initial top-line beat and steady outlook, but are back at the lows of the day now…

The company remains caught up in the worsening standoff between China and the US. Washington is increasingly trying to cut off the Asian country from advanced chip technology, threatening Nvidia’s access to that market.