NYC Spent Nearly Half A Million Dollars Per Inmate In 2020, Report Says

The Office of the New York City Comptroller Scott Stringer published a new report outlining how the New York City Department of Corrections spent a whopping $447,337 per inmate in fiscal 2020, up more than 33% a year ago and more than doubled since 2015.

Rising costs per inmate come as violence has exploded within NYC jails. “The rate of incidents and allegations of use of force has also grown sharply, nearly doubling from FY 2018 to FY 2020,” Stringer said in the report. 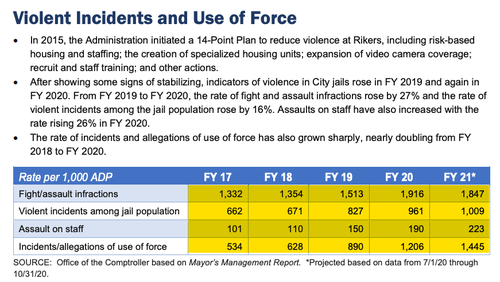 “The cost to incarcerate a single individual on Rikers has exploded even as our jail population remains near historic lows – yet rates of violence continue to climb,” Stringer said in a statement published Wednesday. “That means we are spending more and more money to incarcerate fewer and fewer people and reducing the safety of both officers and people in custody in the process. We must reimagine our criminal legal system, dramatically reduce the pretrial population, and invest our taxpayer dollars in the resources and programs—from housing to health care—that prevent incarceration in the first place.”

The core findings of the report show “the number of people in jail has fallen faster than the DOC budget and headcount, the ratio of correction officers to incarcerated individuals and the cost per incarcerated person has risen.” To incarcerate a single inmate over the 2020 fiscal year costs $447,337, up from $334,864 the prior year. 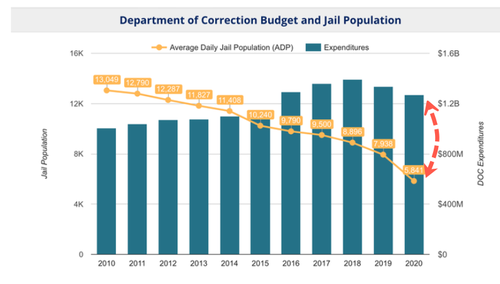 Stringer, who is running to replace Mayor Bill de Blasio as mayor, has pledged if he’s elected mayor, he would close jail facilities on Riker’s Island. A couple of years ago, lawmakers pushed a bill through that would shut down Rikers by 2026.

Since the police killing of George Floyd, NYC has taken steps to defund the police and restructure its criminal justice system, though jail budgets have so far been maintained.