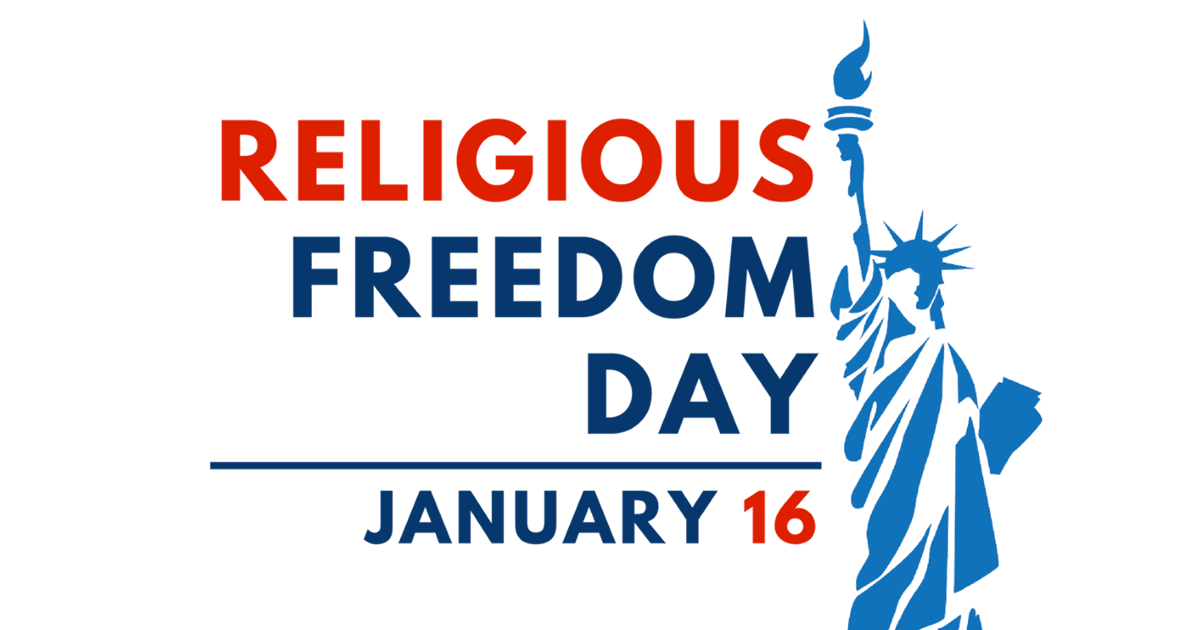 Each year on January 16, America observes Religious Freedom Day. Unlike many others, this observance wasn’t launched in the 20th or 21st century. Its first appearance dates back to a founding American document on the subject, penned by Thomas Jefferson in 1777. Less than 10 years later, the document was enacted into Virginia State Law, and later into America’s First Amendment.

Much of that amendment animates Jefferson’s views and visions for America:

…no man shall be compelled to frequent or support any religious worship, place, or ministry whatsoever, nor shall be enforced, restrained, molested, or burthened in his body or goods, nor shall otherwise suffer on account of his religious opinions or belief, but that all men shall be free to profess, and by argument to maintain, their opinions in matters of Religion, and that the same shall in no wise diminish, enlarge or affect their civil capacities.

The First Amendment—approved by Congress on December 15, 1791—emerged from Jefferson’s writings, and the freedoms enshrined in it have become known as American “First Freedoms.” Thankfully—although not without increasing opposition—religious freedom continues to be the law of the land in the United States.

But unfortunately, as we observe Religious Freedom Day in 2022, much of the world increasingly rejects America’s point of view about religious liberty. In country after country, there are no such boundaries. And today, the two most vicious enemies of religious freedom globally are radical Islamism and post-communist regimes.

In the Middle East, Christians continue to be attacked by radicals and driven out of their historic homelands.

In Iraq, “Beginning in 2014, ISIS drove Christians from Mosul and their traditional homeland in the Nineveh Plains … From 1.5 million Christians in 2003, the Chaldean Catholic church now estimates a population of fewer than 275,000 Christians.”

Christian convert Hadi (Moslem) Rahimi has begun serving his four-year prison sentence for “acting against national security” by attending a house-church and “spreading ‘Zionist’ Christianity.” The 32-year-old delivery driver, who has a nine-month-old daughter, turned himself in to Tehran’s Evin Prison on Sunday morning (9 January)…

Interestingly, despite ongoing marginalization, injustice and violence, innumerable conversions from Islam to Christianity in Iran continue to be reported, even being called a “Christian Boom.”

At the same time, across Africa, attacks on Christians are becoming increasingly violent and frequent. In Nigeria, massacres of Christians are being viewed by international observers as an unfolding genocide. Stories of massacres, mass kidnappings, and torched homes and churches are commonplace.

Meanwhile, in recent months, after America’s abrupt and ill-conceived departure from Afghanistan in August 2021, religious violence is skyrocketing. At the same time, it has become apparent that an underground Christian community, comprised almost entirely of converts from Islam, numbers as many as 10 to 12,000. The Taliban—Afghanistan’s radical new rulers—are systematically seeking out and killing those new believers along with other religious groups who do not conform to their extreme Islamist ideology.

In Pakistan, Christians and others are imprisoned on bogus “blasphemy” charges, often accused by neighbors as revenge for unrelated disputes. Even when those accused of blasphemy are acquitted or released on bail, they are in danger of mob violence. Such is the situation for  Nadeem Samson, who was released on bail on January 6, though his lawyer warns that “when Nadeem Samson is going to court he can be killed anytime.”

At the same time, post-communist regimes such as the Chinese government continue to marginalize religious beliefs that conflict with the state’s official atheist ideology. Well over a million Uyghur Muslims are held in internment camps and used as a source of slave labor. House church pastors such as Pastor John Cao are serving unwarranted prison sentences after being targeted due to their ministries. The country’s burgeoning surveillance state puts all citizens at risk as they are tracked for any actions that might be out of favor with the government—actions including going to church.

In North Korea, known Christians risk their very lives. Those who escape North Korea and are returned by Chinese authorities are particularly endangered as they are suspected of encountering Christian missionaries and churches in China. One North Korean defector said, “If you tell them that you went to a church and believed in Jesus, they would not stop at just beating you.” Other Christians are known to languish in harsh political labor camps with no prospect of ever being released.

Religious Freedom Day is an opportunity to pause and remember the profound importance of this right. As we continue to enjoy our own blessings and opportunities to share our faith, let’s remember those around the world longing to freely live out their faith.