On The January 2017 Felony Flynn Leaks

Authored by Techno Fog via The Reactionary,

Back on January 5, 2017, who leaked intelligence about Russia’s purported efforts to interfere in the 2016 election – and info on the Flynn-Kislyak calls – to the Washington Post? 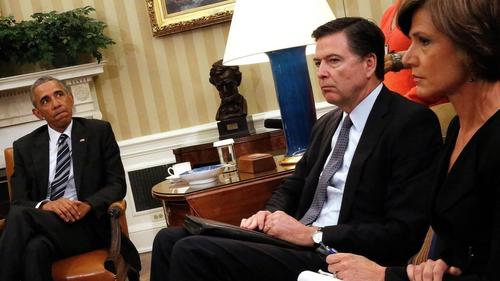 One high level official at the Office of the Director of National had a guess:

“my bet is either the WH or SCCI Dem source on the Hill.”

Those were the words of Brian Hale, the Director of Public Affairs for the Office of the Director of National Intelligence, in response to a question of January 5, 2017 leaks to Washington Post reporters Adam Entous and Greg Miller.

James Clapper, the Director of National Intelligence at the time, was copied on that email. (See below; SCCI = U.S. Senate Select Committee on Intelligence.) 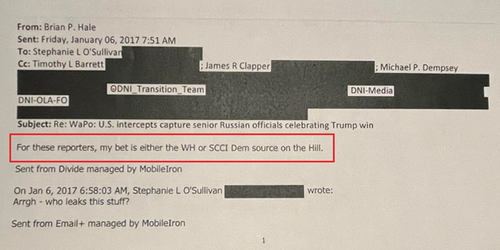 This is the article in question, which discusses the presentation of classified documents to President Obama on January 5, 2017 and goes further than the DNI and DHS assessment that “only Russia’s senior-most officials could have authorized” the “cyber operations to disrupt the U.S. election.”

The U.S. officials cited by Entous and Miller went further, stating that Russia’s actions were aimed at installing Trump as President.

In the last couple years we have done our part in trying to track down the source of the Flynn-Kislyak leak. If you recall, incoming National Security Advisor Lt. General Michael Flynn spoke with Russian Ambassador Sergey Kislyak in December 2016 on a number of issues, including UN votes, the Middle East, and Flynn’s request that Moscow only make their response to US expulsions “reciprocal.” Read the transcripts here.

It was long-thought that the initial leak of the Flynn-Kislyak call was to Washington Post columnist David Ignatius. He was, after all, the author of the January 12, 2017 story which first discussed the calls and whether Flynn violated the spirit of the Logan Act.

This assumption was mistaken.

We were the first to report, however, that the initial leak of the Flynn-Kislyak call wasn’t to Ignatius. It was, instead, to Washington Post reporter Adam Entous. We were informed that these sources actually saw the Flynn-Kislyak transcripts, leaving a small pool of potential suspects.

The INITIAL Flynn/Kislyak leak was not to David Ignatius – it
was to WaPo reporter Adam Entous.

The leak came directly from “sources [who] saw a transcript and described it to [Entous].”

Our reporting was later picked up by Fox News.

The Flynn-Kisleak leak to Entous would have come at the same time as the January 5, 2017 article addressed by Hale – and from the same people.

The leak was a felony orchestrated for the purposes of damaging the incoming NSA and, thus, the incoming Trump administration. The fallout was enough to get Flynn removed, which prevented him from overseeing the ongoing Carter Page FISA renewals.

Additionally, for these acts of diplomacy, Flynn was unfairly targeted by the FBI and members of the Obama DOJ for violations of the Logan Act. The use of the Logan Act was nothing but a pretext. Remember, Crossfire Razor (the name of the Flynn investigation) was set to be closed. It was only after the disgraced Peter Strzok intervened with the Logan Act theory – with the assistance of Lisa Page – that the investigation kept open.

The FBI and DOJ knew that this was improper. January 25, 2017 notes from an FBI OGC lawyer indicated “no reasonable prosecutor” would proceed with the Logan Act. It would be an “uphill battle”; there was the culpability of “other transition teams.”

These perfectly legal communications served as a basis for part of the Special Counsel’s investigation of General Flynn.

And now, if e-mails from inside DNI are accurate, it all might have been furthered, if not totally conceived, by leaks from the Obama White House or a SSCI Democrat source on the Hill.

DOJ Scrutiny of the Flynn-Kislyak Leak

Initially, the Flynn-Kislyak leak would have been managed by DOJ attorney Brandon Van Grack. Van Grack was later part of the Mueller team who went after Flynn.

According to the New York Times, the Flynn-Kislyak leak investigation was later overseen by John Durham, before his appointment as Special Counsel.

On January 19, 2021, the New York Times reported that investigators had closed the investigation into the Flynn-Kislyak leak (dubbed “Operation Echo”). It was said that the US Attorney’s office in DC investigated whether the disclosures came from “former Obama administration officials who had access to sensitive information about the phone calls.” The investigators “ultimately found no wrongdoing.” 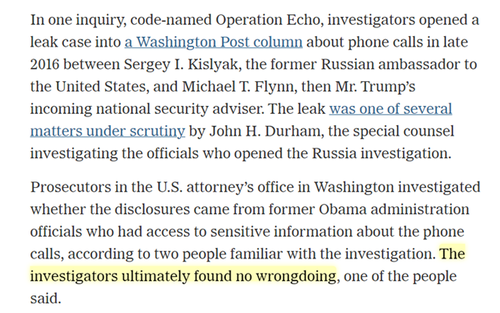 This has always been a curious article. How could there be “no wrongdoing” if the leak is a felony? Could it be that the leak was authorized?

Recall the Flynn unmasking list. The “source” had seen the transcripts. Who unmasked Flynn on January 5, 2017, the same day the WaPo article was published? Obama’s Chief of Staff Denis McDonough. (I’ll note that there are some disputes as to whether the Flynn-Kislyak call would need to be – or technically could be – unmasked.)