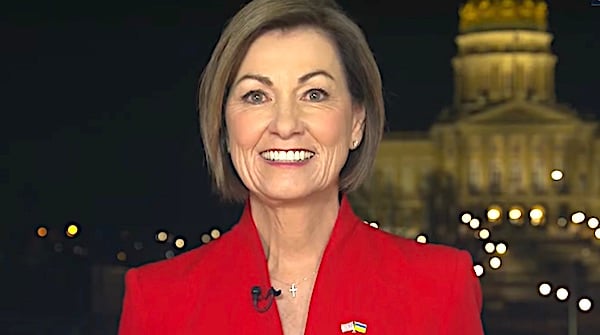 Governor Kim Reynolds, after winning reelection in a landslide, delivered her sixth Condition of the State address where she continued to outline a conservative policy agenda. Governor Reynolds has led the state through natural disasters, the COVID pandemic, and through our current uncertain national economy. Since assuming office, Governor Reynolds has been a champion of conservative policies that place the taxpayer first and protect and defend traditional values. As a result, Iowa’s economy is strong, the tax code is more competitive, and as Governor Reynolds stated the state is “a beacon for freedom and opportunity.”

During her reelection campaign and during the speech Governor Reynolds referred to a “world increasingly marked by chaos,” but “Iowa’s strength and stability stand out.” Iowa often gets overlooked in comparison to other states, but as a result of the leadership of Governor Reynolds she has stood up against modern liberalism and the “woke” agenda. As a result, Iowa is more stable and the policy agenda that the Governor outlined will not only continue to defend conservative values and principles, but it serves as a model for other states.

The top policy priority for Governor Reynolds is education reform. Governor Reynolds has proposed a universal Education Savings Account (ESA) policy that places parents and children first. During her speech, Governor Reynolds offered the best definition of the purpose of education. Too often education becomes a debate over dollars. Already, public education consumes a majority of the state budget and as the Governor mentioned spending on preK-12 education has increased over $1 billion since 2012.

Governor Reynolds is correct that education is not just about how much money is spent. In fact, the Governor noted that some states spend less than Iowa, such as Florida, and they have better outcomes. In addition, education is not a zero-sum game of public versus private schools.

“If you want to pretend this is a war between two different school systems, than you’re not focuses on our children,” stated Governor Reynolds. Governor Reynolds is correct that the purpose of education is to place the best interests of the child first before bureaucracy.

Under the proposed ESA parents would be able to receive $7,598, which is the current state per pupil amount, and apply that toward a private school option for their children. Children who are already enrolled in private schools will be gradually phased in over three years based upon income levels. The universal ESA allows parents to not only decide where their children will receive the best education, but it also tears down barriers to opportunity. No longer will some children be penalized because of their socioeconomic status or zip code.

Since 2018, Governor Reynolds has made tax reform a priority and she has balanced prudent budgeting with pro-growth tax reforms. Now she is advocating a reduction in Iowa’s administrative state. Governor Reynolds noted that “government is marked by bureaucracy’s natural tendency to grow” and that growth must be “constantly checked and rechanneled toward its core function.”

Governor Reynolds has already merged some administrative agencies to make them more efficient, but as she stated it has been “nearly 40 years since we’ve undertaken a comprehensive review of government operations and structure.” Currently, Iowa has 37 executive cabinet branch members and the Governor is proposing to streamline these agencies down to 16.

In addition, to reforming and reducing the administrative state, Governor Reynolds is proposing to eliminate excessive regulations. Regulations are a hidden tax and too much regulation is harmful for the economy. The Iowa code is more than 20,000 pages with 190,000 restrictive terms, which translates into a plethora of regulations.

To unshackle individuals and businesses from regulatory red tape Governor Reynolds has signed an executive order, which places a moratorium on new regulations and requires state agencies to evaluate existing rules over the next four years. Regulations will be evaluated based upon their economic cost and excessive rules will be repealed. “When it’s all said and done, Iowa will have a smaller, clearer, and more growth-friendly regulatory system,” stated Governor Reynolds.