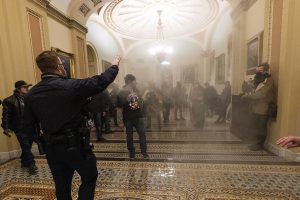 FILE – In this Jan. 6, 2021, file photo, smoke fills the walkway outside the Senate Chamber as rioters are confronted by U.S. Capitol Police officers inside the Capitol in Washington. At least 10 Ohioans have been charged in connection with the deadly Jan. 6 insurrection at the U.S Capitol after being identified through social media and surveillance footage to the FBI. The group includes people linked to the Oath Keepers militia group who have been indicted on charges that they planned and coordinated with one another in the attack. (AP Photo/Manuel Balce Ceneta, File)