The risks of tightening into a downturn. 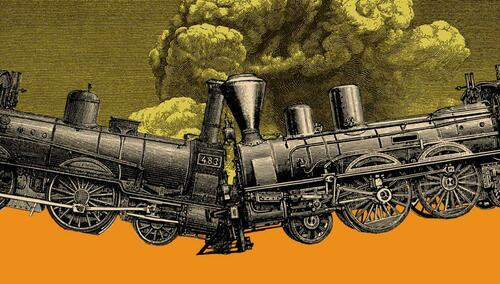 If two trains are heading towards each other at different speeds, when will they collide?

This grade school arithmetic problem is playing out in the Federal Reserve’s (Fed) execution of monetary policy. In this case, one train is the aggressive tightening plan as telegraphed by the Fed and the other is the U.S. economy which, while still strong, is showing a few signs of cooling. Investors want to know when the collision—a recession—will occur.

The Fed’s dual mandate calls for full employment and price stability. Historically, the Fed would change the fed funds rate in response to changes in the unemployment rate and changes in inflation (i.e., the second derivative of the price level). Simply adding up these changes (flipping the sign for unemployment) has tracked well with changes in Fed policy. This relationship has held over several decades and through both tightening and loosening of monetary policy. 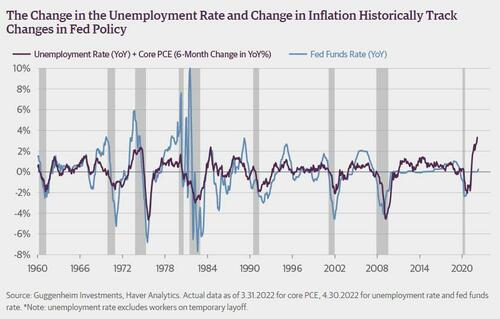 However, over the past year there has been a notable divergence in this relationship. The steep drop in unemployment and sharp acceleration in inflation was met by an unresponsive Fed. This breakdown in the typical reaction of the Fed can be attributed to the unique nature of the pandemic shock, the Fed’s updated policy strategy, and a misreading of the inflation surge as transitory. The result is that the Fed, as it now acknowledges, is badly behind the curve and “expeditiously” moving ahead with 50 basis point hikes to both keep inflation expectations in check and protect its reputation.

At the same time, however, inflation is now decelerating and the pace of decline in the unemployment rate is slowing. Had the Fed followed the historical pattern in the chart above, the fed funds rate would be around 2.5 percent now and the Fed would be able to start pulling back on rate hikes as the economy cooled. Instead, the Fed looks poised to hike to around 3.5 percent into next year, when inflation will have slowed further and the unemployment rate will have largely leveled off. With the passage of time as the Fed continues to hike, we will likely find ourselves experiencing the effects of increasingly restrictive monetary policy. 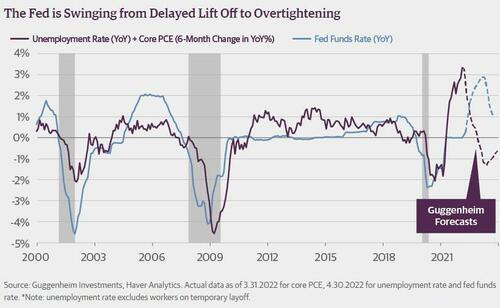 Well before it reaches this terminal rate the Fed will increase the risk of overshooting, causing a financial accident, and starting a recession. Such an asynchronously tight monetary stance should exacerbate the cyclical slowing of the economy and cause a recession as early as the second half of next year. Given this collision course between the Fed and the cooling economy, long term interest rates are likely near a peak.

And as Guggenheim’s CIO, Scott Minerd, noted on CNBC earlier, don’t expect The Fed to protect your downside in the market either… “we are going to be meaningfully lower in stocks by the end of the year because The Fed has made it clear that they do not have a put on the stock market.”

Guggenheim’s fears correspond with SocGen’s previous warning that this cycle puts the peak of the Fed Funds at just below 1.0%, or less than 3 more rate hikes before the Fed is forced to reverse!