The budding army of amateur flight-trackings sleuths on twitter was proven correct again when less than a day after a barrage of unconfirmed reports that the world’s greatest investor, Nancy Pelosi, was on her way to Asia – where he supposedly is planning to visit Taiwan, a move which some say could spark World War 3 – on Sunday morning her office confirmed that the House Speaker has begun her anticipated trip to Asia, with her office naming four destinations but making no mention of Taiwan.

The official release of her itinerary comes amid more warnings from Beijing over her possible visit to the island.

Pelosi, the third in line of US presidential succession, is leading a six-member congressional delegation to Singapore, Malaysia, South Korea and Japan, according to a statement released by her office early on Sunday which however skipped any mention of Taiwan, after days of intense speculation about a likely stop there fuelled tensions, with Beijing calling it a “provocation” and warning Washington against “playing with fire”.

But the careful wording of the statement did not rule out the possibility of a visit either.

“In Singapore, Malaysia, South Korea and Japan, our delegation will hold high-level meetings to discuss how we can further advance our shared interests and values, including peace and security, economic growth and trade, the Covid-19 pandemic, the climate crisis, human rights and democratic governance,” the statement said.

“America is firmly committed to smart, strategic engagement in the region, understanding that a free and flourishing Indo-Pacific is crucial to prosperity in our nation and around the globe.”

Singapore’s foreign ministry confirmed on Sunday that Pelosi would be visiting for two days starting on Monday.

To be sure, Beijing will be following every move of the delegation extremely closely as it regards Taiwan as a breakaway province, to be reunited by force if necessary, and has repeatedly warned against any official exchanges with the self-governed island, going so far as hinting it would shoot down her plan and start a war if Pelosi were to visit the island.

It earlier described the possible trip to Taiwan as a move to support “Taiwan independence”, in violation of the one-China policy.

Meanwhile, the possibility for a stopover in Taiwan has not been ruled out completely.

“The statement is very carefully written. It only says that Pelosi is going for a trip to the Indo-Pacific region, including four nations while making no mention of Taiwan. So, in the case of Pelosi making a surprise visit to Taiwan, the press release still holds as she has never formally acknowledged or denied that Taiwan is a stop in her trip,” said Wu Junfei, a researcher at the Hong Kong-China Economic and Cultural Development Association think tank.

“For now, Pelosi still has ample room to manoeuvre. The final result will still depend on how China and the US continue with the negotiations.”

In recent day, China doubled down on its warning rhetoric to the US. On Saturday the state broadcaster CCTV published for the first time a video showing the launch of DF-17 hypersonic missile – a clip that was later deleted. The move has been widely seen as a clear warning, even though the video, which was subtitled “the target: win”, was ostensibly celebrating the anniversary of the founding of the army.

Also on Friday, in another signal of Beijing’s displeasure with Pelosi’s trip, the Chinese military started a series of exercises, including live-fire drills in the waters off Fujian, the province adjacent to Taiwan Island. Air force spokesman Shen Jinke said on Sunday: “The air force has a strong will, full confidence and sufficient capability to defend the national sovereignty and territorial integrity.”

Xiaoyu Pu, associate professor of political science at the University of Nevada in Reno, said one possibility was that Pelosi could touch down on Taiwan “just for a short while” before proceeding to Japan and South Korea. If that happens, he predicted a strong military response from Beijing but not to the point of no return.

“You have to bear in mind that while China is putting tremendous pressure on the Biden administration to stop the trip, it is also hard for her to back down from this trip after the hype. There will be lots of domestic political pressures if the trip is cancelled, given the current anti-China atmosphere in the US,” Pu said.

“Xi [Jinping] and [Joe] Biden had certainly spoken on this issue on their recent call. Both sides must have talked about potential responses and consequences … Both sides shall leave some rooms for the preparation of their face-to-face meeting in November.” 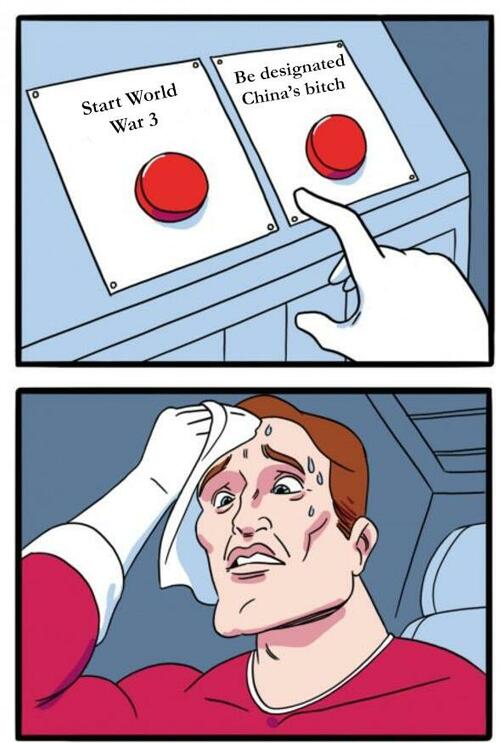 On Saturday, we reported that online flight trackers showed that a plane believed to be carrying Pelosi’s party had landed in Hawaii in the early hours of Saturday and stayed there for 16 hours. The plane then took off at 7pm local time (5am on Sunday GMT) heading towards Asia, about an hour before Pelosi’s statement was released.

Pelosi said they had a fuel stop in Hawaii where they also had a briefing from US Indo-Pacific Command leadership, as well as a visit to the Pearl Harbor Memorial and the USS Arizona.

Hu Xijin, the outspoken former state media editor of state-owned tabloid Global Times, posted on Weibo that Pelosi’s latest statement may have been an attempt to “reduce the provocative meaning of her visit to Taiwan”, but “as long as she lands in Taiwan, the Chinese side will not accept it”.  He added: “Now we must not be careless, and must continue to warn her loudly: do not go to Taiwan, there will be serious consequences.”

Earlier on Saturday, Hu said “it is OK [for the People’s Liberation Army] to shoot down Pelosi’s plane” if it was escorted to Taiwan by US fighter jets. In an earlier post on Twitter, the former head of a tabloid published by the Chinese Communist party’s flagship newspaper group said that China should “punish” Pelosi if she did not cancel her planned visit to Taiwan. “[The] PLA Air Force will surely make her visit a disgrace to herself and to the US,” Hu added.

“Pelosi is one of the most important national leaders in the US,” said Lu Xiang, a US expert at the Chinese Academy of Social Sciences in Beijing. “For people in her position, every move comes with consequences. If she visits Taiwan without the consent of China there would be serious consequences, including military consequences.”

Biden last week said the Pentagon believes it is “not a good idea” for Pelosi to visit Taiwan at the moment.

In response to the latest developments, the South China Morning Post, Hong Kong’s newspaper of record since British colonial rule and currently controlled by Alibaba published an op-ed slamming Taiwan president Tsai Ing-wen, titled “Cowardly silence in Taipei as Pelosi plans trip“, in which the author slams the president writing that “aAt a moment of real danger, by staying quiet and letting Washington decide whether the US House speaker should visit as if the island has no say in the matter, President Tsai Ing-wen is turning Taiwan into America’s 51st state.”

“For Beijing, it’s sheer provocation. For Washington, it’s showing support to a friend. Of course, both countries have agendas quite at odds with the best interests of the Taiwanese.”

Still, when all is said and done, we still remain confident that World War 3 will not begin over the itinerary of the most infamous Congressional insider-trader. Still, US Congress is best known for its unfathomable stupidity and hubris, so keep a close eye on the plane’s current flight path which is available below: 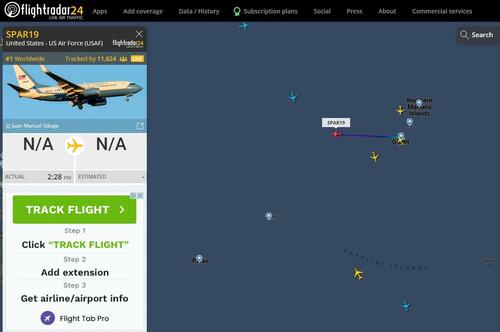