Pelosi Is Irrelevant: China Was Already Planning An Invasion Of Taiwan

Would China really commit to an impromptu war with Taiwan over Nancy Pelosi, a person who amounts to nothing more than a political smudge in the history books?  No, they wouldn’t, but they would be happy to use her diplomatic visit to Taiwan as a pretense for invasion.

The timing for Pelosi’s visit to Taiwan has not been released and will likely remain classified until the event.  China has announced live fire drills this week in the Taiwan Strait as a show of force and a state run newspaper has even suggested that the CCP has the right to shoot Pelosi’s plane down (If the CCP is hoping this will scare the American public, they might want to consider again that it’s Pelosi on the plane; i.e. no one cares).  China has also insinuated that direct invasion will take place if the visit occurs.

A US carrier strike group is moving near Taiwan after being deployed from Singapore and tensions are high.  Ironically, Democrats chastised Donald Trump for “upsetting” Chinese/US relations over Taiwan only a couple years ago, and now they are one-upping him.

According to an alleged Russian intel leak in 2021, the CCP was already planning a forced annex of the island nation (that the Chinese claim is not a nation) for the fall.  The leak from Russia’s FSB has not been verified, but it does parallel the increase in Chinese naval activity in the region, along with even more aggressive rhetoric than usual against Taiwan.

The Russian invasion of Ukraine perhaps triggered a pause in China’s plans, but not a complete reversal.  The increase in joint Russian and Chinese naval drills around Japan and Taiwan suggest that a Taiwan event will not be limited.  It could spread north to the Sea of Japan, where China and Russia would seek to nullify a response from US bases.

Yes, this would be quite an escalation and it’s far more likely that China would play the long game by waiting for US and European economic turmoil to degrade their ability to respond to a regional conflict.  Of course, there is something to be said for the element of surprise.

Timing is also a major consideration for China.  Weather cycles in the Taiwan Strait make a naval invasion difficult to maintain as dangerous storms rip through the area for a large part of the year.  September and October are the key months when the weather is most advantageous for Chinese naval operations.  Extreme weather fronts can disrupt radar, communications, thermal vision, night vision, drones, air support and obviously normal visibility, making intricate offensive actions very risky. 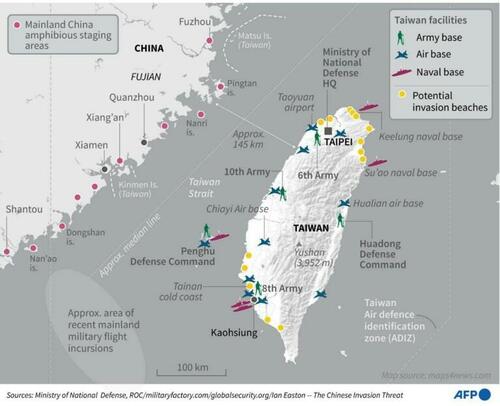 It’s interesting that Pelosi appears to be scheduling her visit sometime in the next month, so close to when weather conditions are the most ripe for a Chinese attack.  Typhoons are expected to strike Taiwan through August and then dissipate in September/October when invasion is preferable.

The bottom line is that China WILL invade Taiwan in the near future.  Once communists decide that a group or nation stands as a symbol of opposition to their power, they will stop at nothing to erase that symbol.  Whether or not western interests are taking advantage of the situation is something to consider as well.

A regional war involving Taiwan as a proxy for conflict between the US and China would probably progress much like the war in Ukraine – Lots of big talk and propaganda in the media about how China is being crushed economically and militarily.  But, in the end China sits right across the water from Taiwan, just as Russia sits right across the border from the Donbass.  Logistically, they have the advantage and they have the time.  Wearing the west down financially and through attrition would be their strategy and it would likely succeed given the mental weakness within the White House and among the current military brass.

This is not to say China is justified.  Not in the slightest.  China is one of the most Orwellian nightmare states on the planet and their obsession with Taiwan is a product of communist zealotry rather than any sort of logic or reason.  This doesn’t change the fact that they have the strategic advantage if they manage to lure the US into a quagmire across the pacific, and Japan’s ability to help defend Taiwan is questionable.

In terms of the bigger picture, certain interests (globalists) within organizations like the WEF might welcome such chaos and conflict.  It could be used as cover for the ongoing global economic decline that they helped create, and give them yet another shot at reducing our freedoms in the name of “security.”  One really needs to ask, why would Pelosi go to Taiwan right now?  And, who has asked her to go?  Is this Biden’s idea, or are other beneficiaries involved?