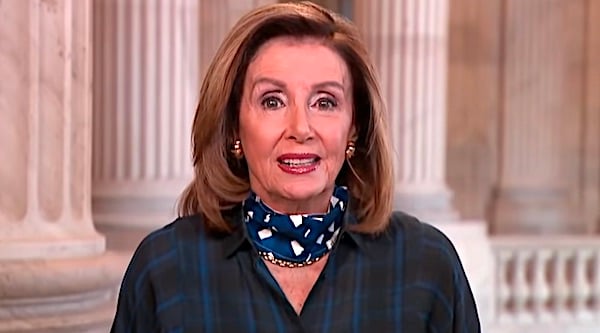 House Speaker Nancy Pelosi, in a move that put her in the position of thumbing her nose at the Catholic archbishop in her home diocese, traveled to Rome and took Communion with Pope Francis, according to reports.

The Democrat has been banned by San Francisco Archbishop Salvatore Cordileone from the church rite because of her open support for abortion. Several other American archbishops have joined Cordileone in his verdict.

But Fox News reported witnesses said Pelosi and her husband, Paul Pelosi, who is awaiting trial on a drunken driving case, took Communion during a papal mass in St. Peter’s Basilica.

“Pelosi attended the morning Mass marking the feasts of Sts. Peter and Paul, during which Pope Francis bestowed the woolen pallium stole on newly consecrated archbishops. She was seated in a VIP diplomatic section and received Communion along with the rest of the congregants, according to two people who witnessed the moment,” the report explained.

Cordileone has said Pelosi must either repudiate her support for abortion or stop speaking publicly of her Catholic faith.

She has refused, and earlier took communion in a Catholic church in the Washington, D.C., area in defiance of Cordileone.

Politico reported that, contrary the instructions from the church she claims to be faithful to, she “called the recent Supreme Court ruling removing constitutional protections for abortion an ‘outrageous and heart-wrenching’ decision that fulfills the Republican Party’s ‘dark and extreme goal of ripping away women’s right to make their own reproductive health decisions.'”

At virtually the same time, she repeatedly has cited her Catholic church and its virtues of “faith, hope and charity.”

Politico noted, “Last year, President Joe Biden, another Catholic who also supports abortion rights, said after meeting with Francis that the pontiff told him to continue receiving the sacrament. Biden later received Communion during a Mass in a Rome church that is under the authority of Francis as bishop of Rome.”

At the Business Insider, a report explained, “The AP reported that Pope Francis did not preside over Communion himself, which fits his broader approach of trying to avoid the political fights that have ensued over one of the pillars of the Catholic faith and Christianity.”

He said, “After numerous attempts to speak with her to help her understand the grave evil she is perpetrating, the scandal she is causing, and the danger to her own soul she is risking, I have determined that the point has come in which I must make a public declaration that she is not to be admitted to Holy Communion unless and until she publicly repudiate her support for abortion ‘rights’ and confess and receive absolution for her cooperation in this evil in the sacrament of penance. I have accordingly sent her a notification to this effect, which I have now made public.”

Pelosi repeatedly has claimed she is a “devout Catholic.”

The church’s position, since the first century, has been that procured abortion is a moral evil.

Pope Francis has said, “Whoever has an abortion kills. It is a human life.”

The post Pelosi takes Communion with pope, snubbing orders from own archbishop appeared first on WND.

2 hours ago
Needed: A ‘more woke than you’ awakening of patriots

2 hours ago
Needed: A ‘more woke than you’ awakening of patriots