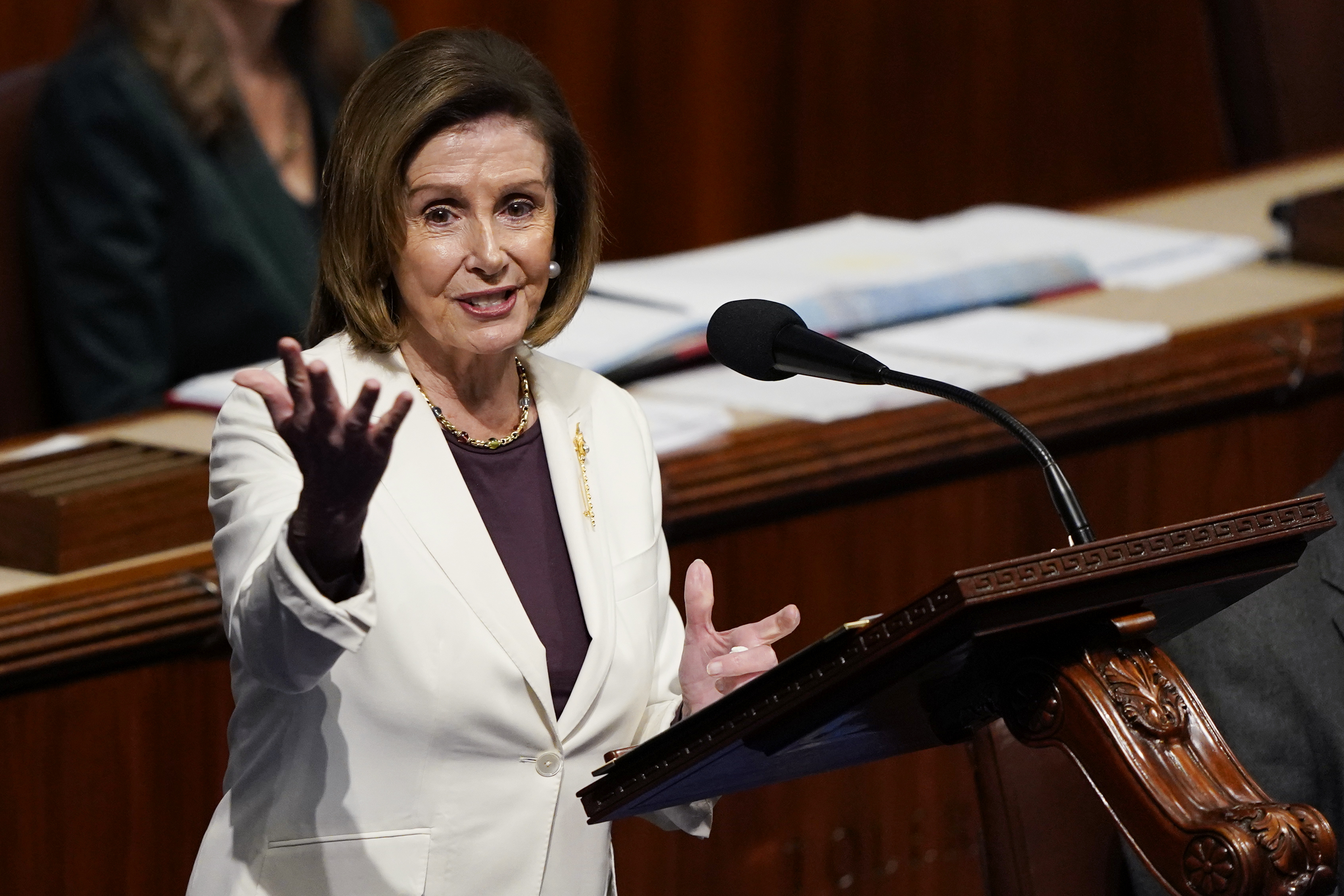 Days later, a more positive wrinkle arrived in the form of Democrats’ stunning midterm election success. But this time, Pelosi had a Democratic president and Senate majority leader safely in power, both urging her to stay. And her party’s potent performance at the polls gave her a fitting backdrop for her emotional farewell Thursday — plus ample reason to advise her successors on exploiting the struggles of Kevin McCarthy, the GOP leader for whom her disrespect is no secret.

Her ultimate plans, revealed Thursday, set up a leadership exit that is distinctly Pelosi: Even from out of power, she’ll keep her pull, because her members want it that way.

“I’ve been in alley fights here. And some of the pretenders to the throne have never been in that alley fight,” Rep. Raúl Grijalva (D-Ariz.) said, referring to Pelosi’s rivals over the years. “But I’ve seen Nancy, and I should add: She brings a knife.”

Pelosi’s decision capped a crescendo of speculation about her future that became perhaps the last Democratic drama with her as central player. On Wednesday night, she took home two copies of her floor speech announcing her plans, keeping even her closest allies guessing until the last minute. By the time she did start speaking, nearly every House Democrat was in attendance — with as much pomp and circumstance as a State of the Union address, at least on one side of the aisle.

McCarthy wasn’t in the chamber for the speech, but several Republicans were, including House Minority Whip Steve Scalise (R-La.). It was perhaps the clearest sign of their respect for their longtime foe, a skilled tactician who famously defused epic intraparty fights to pass some of the nation’s most consequential laws.

Her second stint as speaker featured challenges that dwarfed even passage of the Affordable Care Act. After battling Donald Trump during his last two years in power, she navigated the first half of the Biden administration with one of the smallest margins in House history, while grappling with the fallout from a violent Capitol insurrection and a global pandemic that would kill over 1 million Americans.

“Without a jaundiced eye, you would come up with a conclusion that she was the most successful speaker” in history, said Rep. Tony Cárdenas (D-Calif.), who had a reserved front-row seat to her announcement. Pelosi’s influence, he said, comes not from brute force but her skillful cajoling of even the most dug-in member. “Luckily for me, I’ve only had to have Nancy come to me, like twice.”

She is perhaps more proud of a milestone bigger than her power of persuasion: being the first person since Sam Rayburn in 1955 to lose the gavel, then claw it back. That her second stint as the first woman speaker was sealed by a woman-driven, anti-Trump wave in 2018 only cemented her status as a cultural icon among liberals.

By the time she leaves leadership, Pelosi will have steered the party through a tumultuous two decades that started with the Iraq war and ran through the 2008 recession, the Iran nuclear deal, a pandemic and the fall of Roe v. Wade. She will almost certainly maintain her record of having never lost a floor vote on legislation.

And she did it with little sleep, as her members often note. One negotiating partner, Rep. Josh Gottheimer (D-N.J.), recalled getting a Pelosi call in the wee hours of the morning at a tense point in Congress’ infrastructure debate. She asked him, as Gottheimer recalled, to assemble a group for a 7 a.m. meeting the next morning.

Every member she wanted to corral the next day showed up.

‘She knows how to throw shade’

Raised in the favor-trading political machine of Baltimore, Pelosi was unafraid to borrow from those tactics as the House’s top Democrat. Members across the caucus were familiar with her pressure campaigns. Sometimes they were blatant, like denying defectors their preferred committee slots or teaming up to oust her rivals in key races. At other times, the touches were more subtle, such as a sudden call from a powerful labor boss back home or a Cabinet member when she needed to secure a vote.

House Ways and Means Committee Chair Richie Neal (D-Mass.) recalled one instance during the Affordable Care Act debate when he had spent months working a Democratic holdout, then-Rep. Jerry Costello. The Illinoisian had repeatedly told party leaders he would vote against the bill — even declaring it to then-President Barack Obama.

Costello moved to the yes column — eventually bowing to Pelosi, not the president who shared his home state.

“Nancy is generally a really nice person, but she knows how to throw shade in a very classy, classy way,” added Rep. Ruben Gallego (D-Ariz.), remembering the contentious intra-caucus battle over the Iran nuclear deal in 2015.

Peters had pushed changes to the bill that would have accommodated pharmaceutical companies in his district, but other Democrats stood against him, including House Energy and Commerce Committee Chair Frank Pallone (D-N.J.).

As the debate dragged on, Pelosi gathered the plan’s supporters and skeptics to reach a deal. After Peters described his proposal — which essentially watered down the bill — to the obvious chagrin of others in the room he recalled that the speaker “just looked at the other parties and says, ‘That sounds reasonable, doesn’t it?’”

Faced with what Peters called “kind of an icy stare” from Pelosi, he summed up the only thing his colleagues could say back: “‘Well, of course it does.’”

At home and abroad

Equally at home in a spending bill markup and the top-secret intelligence facility known as the “SCIF,” Pelosi has used her final years in power to make high-stakes foreign trips. Perhaps the most high-profile of them came months ago — a politically charged visit to Taiwan that even Biden officials warned against — but she’s also visited conflict zones in Ukraine and the demilitarized zone on the Korean peninsula.

Rep. Mark Takano (D-Calif.), a longtime ally who accompanied Pelosi to Taiwan, said he’s spent years watching her navigate male-dominated institutions, sometimes facing headwinds in her own party. He recalled meeting with Democratic donors, mostly men, who said it was time for Pelosi to go before later acknowledging their miscalculation.

One Democratic donor who “gave me a really hard time” texted Takano shortly after one of Pelosi’s many public refusals to back down to Trump, as Takano remembered it. The text said: “I was wrong about Nancy Pelosi.”

After her two decades at the top, it’s the rare Democrat who doesn’t have a story of Pelosi single-handedly ensuring a certain change becomes law.

Rep. Anthony Brown (D-Md.) saw it happen in December 2020, when Pelosi sided with him and against her own Armed Services Committee chair about stripping the names of ex-Confederate leaders from military bases in the annual Pentagon policy bill.

Brown said he was outside shoveling mulch on a Saturday when he got the call from Pelosi, throwing her weight behind his effort. Thirty minutes later, he got a call from his committee chair, Rep. Adam Smith (D-Wash.), who was, in Brown’s words, “pissed.”

“Now, it won’t go down in history like it did her work on the Affordable Care Act,” Brown allowed, before adding: “I’m telling you, if Pelosi didn’t stand up the way she did, we’d still be going through the gates at Fort Hood, Fort Bragg and Fort Benning named after Confederate traitors.”

Pelosi has made just as many contributions back home. Few figures have similarly towered over San Francisco politics in her decades of representing the sapphire-blue city. She belongs to a lineage of California Democrats who rose from the city by the Bay to national prominence, including Sen. Dianne Feinstein, Vice President Kamala Harris and Gov. Gavin Newsom.

She built her massive political clout by helping direct deep wells of California money to federal races around the country, through a legendary annual wine country fundraiser and countless other home-state activities.

In fact, Pelosi first came to Congress in 1987 with the help of a San Francisco dynasty. An ailing Rep. Sala Burton (D-Calif.) urged Pelosi to run and enlisted her brother-in-law, former Rep. John Burton, to help the 40-something candidate overcome a crowded Democratic field.

At the time, Pelosi’s main political experience consisted of having chaired the California Democratic Party. But she began climbing the Democratic hierarchy soon after arriving in Washington, the beginning of her reputation as a masterful tactician.

“Sala saw on her deathbed what the whole friggin’ world sees today,” John Burton said in an interview. People on Capitol Hill “underestimated her,” he added, “and she took it all over.”

Jeremy B. White, Nancy Vu and Nicholas Wu contributed to this report.