Just days after word broke that Peloton was shopping around to find a new minority investor (maybe a PE or pension fund, perhaps?) to help recapitalize the company as it scrambles to pivot and revive its business, the company reported an earnings report that was any but encouraging.

First of all, the company’s Q3 results were disappointing: its revenue of $964.3 million marked a -24% y/y drop, and also missed estimates of $971.6 million (although there was one important bright spot – connected fitness subscribers climbed to 2.96 million, a +42% y/y jump that beat estimates for just 2.9 million).

But it was the guidance that really made investors nervous, particularly the projected numbers for next quarter (numbers courtesy of BBG):

The company’s stock tumbled 20% in premarket trade as its Q4 revenue guidance disappointed, while the company also signed a binding commitment letter with JP Morgan and Goldman to borrow $750 million in 5-year term debt. 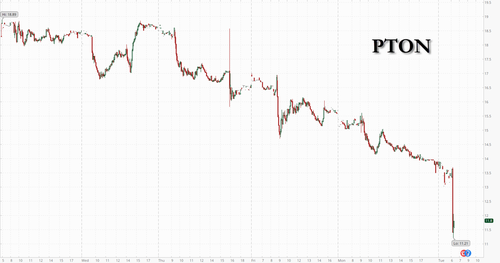 Also one twitter user pointed out the following detail from the company’s filing, and joked that that management sounded more than a little out-of-touch.

Peloton is beginning to sound like a Herbalife distributor pic.twitter.com/y3V1uK3Rqa