On Monday The Washington Post is reporting that for the first time the Pentagon will provide Ukrainian forces “high-precision laser-guided weapons” as part of the recently approved mammoth arms package amid Russia’s invasion.

As expected, defense contractors will continue seeing a windfall of profits: “The Pentagon is expanding delivery of commercially available weapons and military equipment to Ukraine, detailing on Friday its $136 million in purchases of aerial drones, laser-guided rockets, binoculars and other items set for shipment soon.”

The WaPo details further that “The weapons and equipment, to be purchased from U.S. companies, represent a separate category of military assistance than the vast quantities of armaments that the United States already has provided Ukraine from existing Pentagon stocks.”

Pentagon undersecretary for acquisition and sustainment Bill LaPlante has vowed to utilize “all available tools to support Ukraine’s armed forces in the face of Russian aggression.”

This is but the latest in the ramped-up continuing saga of it’s not a proxy war simply because we insist it’s not a proxy war… Many Western military analysts have pointed to the game-changing nature of US weapons and intelligence-sharing on the Ukraine battlefield, saying it’s greatly slowed and even stalled the Russian advance, also in the east, where Russian forces have focused their current objective on taking the Donbas.

According to further details of a system called the “advanced precision kill weapon system”:

This round includes $22.6 million worth of 70mm rockets — known as the advanced precision kill weapon system — that can be fired from helicopters

…the advanced precision kill system, for instance, works by converting low-cost ammunition into guided weapons. U.S. forces have used it to supplement the firepower inherent to a variety of aircraft, including helicopters and fighter jets.

Below: what was reported as of last week, part of the massive US weapons pipeline to Kiev. Infograph: Breaking Defense 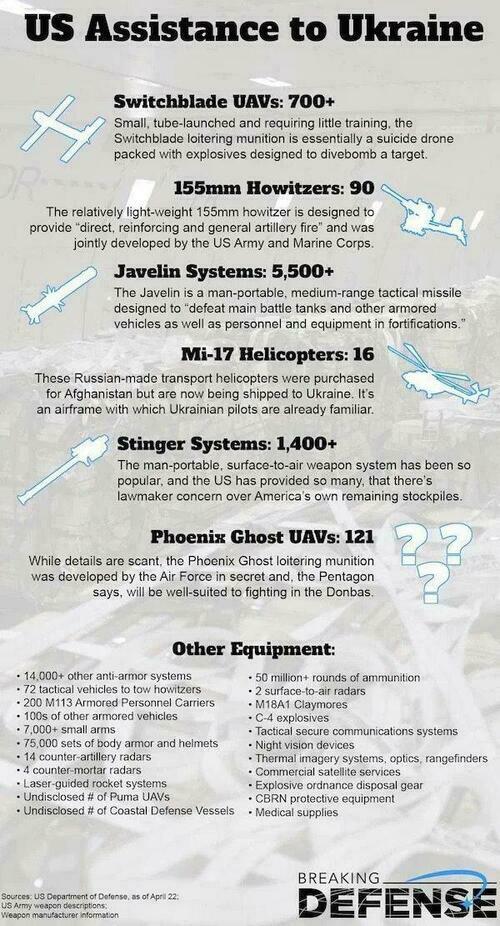 Last month Defense Secretary Lloyd Austin bluntly admitted of US policy aims in Ukraine: “we want to see Russia weakened to the degree it cannot do the kinds of things that it has done in invading Ukraine.” He also sought to stress before the American public during an interview that the US is not fighting a “proxy war”. However, there’s clearly a contradiction in these two statements, especially given Biden administration actions in the form of unprecedented military assistance