By Greg Miller of American Shipper,

In a sign of just how frenzied the container market has become, a freight forwarder is reportedly paying $135,000 per day for a short-term charter of the S Santiago, a 15-year-old container ship with a capacity of 5,060 twenty-foot equivalent units (TEUs).

“Charter rates for short employment … have gone out of control,” said Alphaliner in its new weekly report.

“Depending on the sources, the ship would have obtained anything between $100,000 and $145,000 per day, an absolute historic high. The name of the charterer has not been fully confirmed, although it is believed to be a forwarder.” 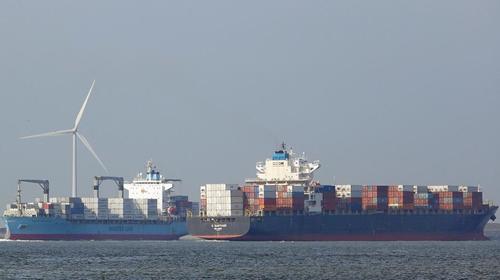 An industry source speaking to American Shipper on condition of anonymity said the rate was $135,000 per day, the duration was 45-90 days (one round voyage with an option for a second) and the charterer was Chinese freight forwarder 3 Seas.

The source said that there is “more and more enquiry every day” with “people panicking now” amid “unprecedented times.”

Alphaliner said that “this colossal rate is substantially higher than the already whopping $70,000-$90,000 per day — depending on the final duration — agreed recently by Hapag-Lloyd for a two- to three-month employment of the 4,308-TEU CMA CGM Opal.”

The industry source told American Shipper that the S Santiago deal was concluded last week and that he wouldn’t be surprised if a new record were reached this week.

According to U.K.-based valuation and data provider VesselsValue, the 2006-built S Santiago is owned by Cyprus Sea Lines and is currently valued at $38.48 million.

To put the enormity of the charter deal in perspective, the shipowner will earn back one-sixth of the ship’s value in a single voyage — and one-third of the vessel’s value if the charterer takes the option for the second voyage.

What this means for cargo shippers

The historic S Santiago transaction is yet another big red flag for cargo shippers. Charter rates like this only make sense if freight rates are high enough for the charterer to turn a profit.

It also underscores just how tight vessel supply is.

And cargo shippers will not be getting any relief in the near or medium term from newbuild deliveries.

There has been a surge of orders recently, but those are for 2023-2024 deliveries. Clarksons Research Services estimates that fleet growth in 2022 will fall to 2.5% from 4.6% this year.

What this means for ship lessors

The S Santiago rate was so high because ship lessors, otherwise known as non-operating owners (NOOs), much prefer to put their tonnage on multiyear charters and lock in long-term profits.

“Those electing to accept short-term charters are likely doing so to capture fantasy rates near term,” said Fearnley Securities, referring to the “off the charts” S Santiago transaction.

According to Alphaliner, “The market has become one of long-term charters, with 43 of the 51 fixtures reported in the past two weeks concluded for durations of 24 months or over.” Of that total, three charters were for five years’ duration, nine were for four years, 10 for three years and the remainder for two years.

What this means for liners

Today’s unprecedented freight income more than offsets stratospheric charter costs, but NOOs are forcing liner operators to accept longer durations to get the ships. If freight rates were to fall significantly by 2023-24, charter rates negotiated in 2021 will be much more painful to liners’ bottom lines.

ZIM offers the most extreme example, because unlike other liners, it charters its entire fleet and does not own vessels. As of Sept. 30, 2020, 71% of its capacity was chartered for a year or less. The company touted the advantage in its IPO prospectus, stating, “Short-term charter arrangements allow us to adjust our capacity quickly in anticipation of, or in response to, changing market conditions.”

But as ZIM has rapidly increased its fleet size to capture freight-rate upside, charter durations have ballooned. Its fleet size nearly doubled from 59 vessels in mid-May 2020 to 110 as of mid-May 2021.

During the latest quarterly conference call, ZIM CFO Xavier Destriau conceded a shift to longer durations out of necessity.

“We will continue to bring in vessels in order to capture [revenue] from new lines we are opening and to renew existing charters,” said Destriau. “We are not changing our strategy, which is to continue to rely on the charter market. What is changing is the allocation of short-term charters versus long-term charters due to the current market conditions, obviously.”