Even as the August inflation data was coming out higher than expected, President Joe Biden was bragging about his “Inflation Reduction Act.” Peter Schiff appeared on NewsMax and argued that the president is putting Americans at risk just so he can improve his image as we approach election time. 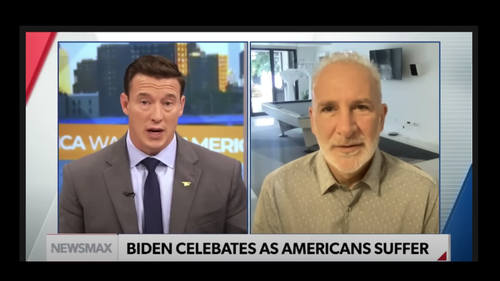 Peter pointed out that one reason energy prices have come down is because the Biden administration dumped millions of barrels of oil from the strategic reserve into the market.

That’s not going to last. And if you look below the surface, we’re seeing an acceleration in food prices, in shelter, in health care — so, everything is really going up. We just have one thing right now that’s pulled back. But of course, energy prices are still up dramatically from where they were a year ago. So, the inflation tax is falling even more heavy on middle-class Americans now than it was a few months ago.”

Peter said the “Inflation Reduction Act” is inappropriately named. It should be called “The Inflation Acceleration Act.”

That is going to have consequences next year in helping push that inflation rate even higher than the inflation from 2022.”

As far as the strategic oil reserve goes, now Biden will have to refill it at a much higher price. Peter said he doesn’t think they’ll refill it at all.

I think more likely, they’re going to deplete the reserve until it’s empty. And then what are we going to do? Then we’ll have no oil to sell. And what if we have an actual emergency, and we have shortages? We won’t have any strategic reserve to fall back on.”

Peter reminded the audience that inflation is even worse than advertised because the CPI formula is rigged.

You really have to double the CPI to get the actual increase in prices that Americans are experiencing. Take one example, which is shelter, which I think rose about 6.1%, which really was the highest, I think, since the 1980s. If you look at the real cost of housing, … medium home prices are up 30% and mortgage rates have gone from 3.1 to 6.1. So, the cost of buying a home and paying a mortgage in the last two years is up by 84%. … And of course, rents are skyrocketing too. And so, what the government claims as the increase in the cost of shelter is just a small fraction of what Americans are actually paying for shelter.”

The anchor pointed out that interest rates need to rise above the CPI in order to tame inflation. Meanwhile, we’re already technically in a recession. Peter agreed we are in a recession, as much as the Biden administration and others, including the Fed, try to deny it.

We’ve already had two quarters of falling GDP. We’re about to have a third, because I think this quarter is going to be another negative quarter. And I think the fourth quarter will also be negative.”

And Peter said the anchor was also correct in asserting rates need to go much higher to tackle inflation.

Even with the Fed’s 75 basis point hike at the September meeting (after this interview), real rates are still -5%.

That is fueling an inflation fire. And of course, the only way to really fight inflation would be a combination of tight money and contractionary fiscal policy. We need big spending cuts coming out of Congress. But unfortunately, they’re doing the opposite. They’re stimulating consumption with more deficit spending.”

The Chips Act, the Inflation Reduction Act, and student loan forgiveness all add to demand.