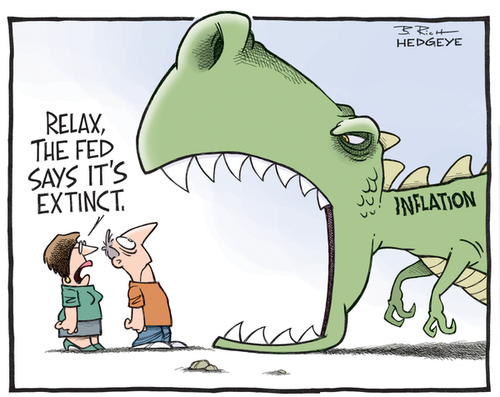 It’s clear that prices are rising. Peter said it’s going to get even worse.

So, how is the government paying for this massive stimulus spending?

The Federal Reserve prints the money and then the government spends it into circulation. But when that happens, the value of all the money that’s already out there goes down and now the price of everything that you want to buy goes up. And that added price is basically the inflation tax.”

The Federal Reserve is printing money at an unprecedented rate. We’ve had 11 straight months of historically high money creation. The money supply expanded at a record rate yet again in February.

Tucker pointed out that this seems intentional – that the government is trying to pay for all of the spending  – making it less costly by devaluing the dollar. Peter agreed.

Well certainly, as you have inflation, you reduce the real value of the debt.”

But Peter said the government has no plan to pay off the debt. And the real problem is the amount of money they are going to have to spend just to finance all their current commitments.

This is a massive amount of money printing. It’s unprecedented inflation because it’s the money supply that is being inflated. And as a result, everything costs more, because we’re not producing more. It’s actually the opposite. Americans are at home. They’re not producing goods and services. Yet, we’re creating more money to buy the goods and services that fewer people are producing. More money, fewer goods. Prices are just going to keep going up and it’s not going to stop.”

Tucker pointed out that this looks pretty crazy from an outsider’s perspective. Peter said he doesn’t know how it looks to an outsider.

But I think to everybody that lives in the United States, it’s not going to look pretty. And the real problem is the Fed. The Fed pretends that it’s transitory. But when they have to admit that it’s not transitory the inflation rate will be far too high for the Fed to do anything about it. Because if the Fed actually raises rates to fight inflation, they’ll create a much bigger financial crisis than 2008 and the US government will be forced into insolvency.”