A Michigan County that found itself embroiled in allegations of fraudulent election results in the 2020 presidential race when it was found to have flipped results isn’t out of the woods yet: A judge has been told that 1,061 “phantom votes” have been found there.

Officials in Antrim County, a Republican-dominated region, first reported their voters chose Joe Biden in the 2020 results. Then they found mistakes and they admitted that voters actually chose Donald Trump.

Now the Washington Examiner is reporting on a still-developing lawsuit over the county’s results.

Antrim County Circuit Judge Kevin Elsenheimer was told during a virtual hearing this week that the “phantom ballots” were revealed because a recount in December totaled 15,962 ballots.

But lawyer Matthew DePerno, representing Antrim resident William Bailey, confirmed that only 14,901 votes were shown in the Michigan secretary of state’s database.

The defendants in the lawsuit, including Michigan Secretary of State Jocelyn Benson, just want the case to go away and are insisting that the plaintiff has no right to sue for the information he’s seeking.

DePerno explained in a court filing the discovery of the “phantoms” is why an audit of the county’s results needs to be completed.

The news publication got no response when it sought a comment from state officials.

“The major Michigan Election Fraud case has just filed a bombshell pleading claiming votes were intentionally switched from President Trump to Joe Biden,” he said in a statement shared by his Save America PAC, the Examiner reported. “The number of votes is MASSIVE and determinative. This will prove true in numerous other States. All Republicans must UNIFY and not let this happen. If a thief robs a jewelry store of all of its diamonds (the 2020 Presidential Election), the diamonds must be returned. The Fake News media refuses to cover the greatest Election Fraud in the history of our Country. They have lost all credibility, but ultimately, they will have no choice!”

The county initially reported Biden won the race there.

“But tabulation errors were quickly discovered, and once rectified, Trump was shown to be the victor,” the Examiner said.

Officials there have offered several explanations, including human error and a failure to properly update software.

The lawyer also told the judge there are questions about 138 ballots that a state official instructed two volunteers to count even though they had “the very same signature in Central Lake Township,” the report said.

The state was one of half a dozen across the nation that proved to be swing states where anomalous election activities and results prompted allegations of misbehavior. Those suspicions focused on massive vote dumps in dark-of-the-night hours where the ballots went almost 100% for Biden.

Several of the states suspended counting on election night, almost at the same time, with Trump leading. Hours later when they resumed counting, Biden was suddenly in the lead across the slate of states.

What is not even in dispute is the fact that while the Constitution assigns to state lawmakers to establish their states’ election procedures, during the 2020 election various state officials, sometimes appointed, sometimes elected, arbitrarily changed state laws to accommodate what they described as the needs from COVID-19. 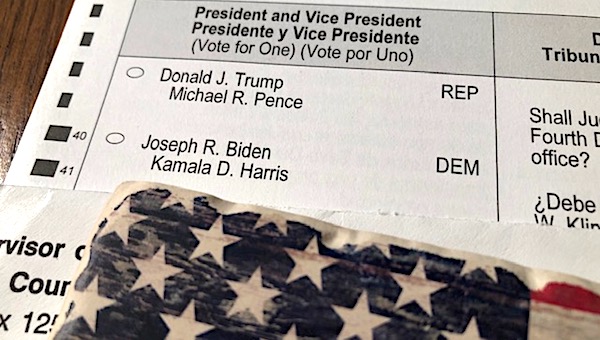