Plane Erupts Into Flames After Crash Landing On Miami Bridge

A single-engine Cessna 172 lost power shortly after takeoff and crash-landed on a bridge in Miami Saturday afternoon, hitting one vehicle and erupting into flames, according to NBC Mami.

The Cessna, with three people on board, lost power shortly after taking off from Fort Lauderdale en route to Key West. It went down around 1300ET on the Haulover Inlet Bridge in Biscayne Bay in Miami Dade County. 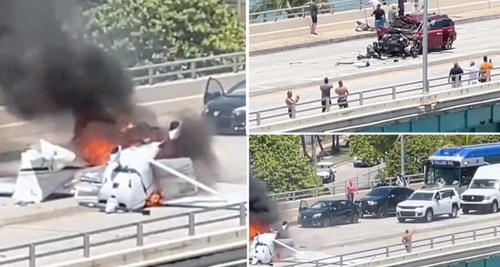 Video of the incident posted on social media shows smoke billowing out of the crumpled plane flipped upside down while a dark red SUV had severe front-end damage.

Fire Rescue officials told NBC Mami six people were injured, including two from the plane who suffered traumatic injuries. Three others were injured with non-life-threatening injuries. A sixth person was injured, though their status is unknown.

Drone footage shows a man jumping out of the mangled plane to rescue at least one other person trapped inside.

so this just happened … about an hour ago Boat Zone’s drone caught the immediate aftermath of a plane hitting a car on the Haulover Inlet, the plane catching fire, and a couple people escaping #surfside #haulover #miami pic.twitter.com/wsG2hsis2I

Another video shows the chaos on the ground.

I received as #Miami #plane #crash . Not sure about the date pic.twitter.com/okzSzGhBhl

The FAA will be investigating the incident.