Like it’s much bigger Pacific neighbor Australia, New Zealand has recently seen a return to imposition of the some of the strictest pandemic lockdown measures on the planet. Australia, for example, has seen instances of police harassing and arresting people at quiet public parks, or even searching packages to ensure citizens’ “quota” of allowable alcohol is not being violated while in quarantine.

Seemingly endless absurd stories of brazen government overreach are coming out of the two countries under lockdown, even with relatively low infection numbers compared to more hard-hit countries like the United States. The latest out of New Zealand suggests that even gang members and criminals are now turning to things like “smuggling” fast food and taking risks to merely enjoy simple freedoms, according to CNN:

Two alleged gang associates found with a car trunk “full of KFC” takeout were arrested as they tried to enter New Zealand’s largest city on Sunday in breach of strict coronavirus lockdown rules, according to police.

It happened in the large metropolitan city of Auckland, which is currently under what the government is calling ‘Alert Level 4’ lockdown, which is the most far-reaching in the country. It requires residents to stay at home most of the time, with all ‘non essential’ services closed including bars, restaurants, gyms and even food takeout services. Essentially people can’t even order food to go.

After nearly five weeks of Auckland in the strictest lockdown possible, New Zealand’s prime minister Jacinda Ardern has announced the restrictions are about to be lifted. Much of the rest of the country is at Level 2 – which means things like restaurants have remained open.

Hence the absurdity of “gang members” now focusing their criminal enterprise on smuggling restaurant food from Level 2 areas into Level 4 zones to make some quick cash, apparently. More details of the offense are in CNN as follows:

Police were patrolling back roads near the outskirts of Auckland when they noticed a suspicious looking vehicle, a New Zealand Police spokesperson said in a statement Monday.

Upon seeing the officers, the vehicle did a U-turn and sped off before eventually pulling over, the statement said. When the car was searched, police found a large quantity of KFC, more than NZ$100,000 ($70,000) in cash, and “empty ounce bags.”

And here was the offense that exposed the criminal conspiracy: “Police photos show at least three buckets of chicken, about 10 cups of coleslaw, a large package of fries, and four large bags containing other KFC items.”

“An undisclosed quantity of fries”https://t.co/ssMIIcixQ6

It’s not The Onion, but police were literally photographing a “crime scene” of buckets of Colonel Sanders’ finger lickin’ good extra crispy. This is the dystopian Black Mirror style bizarro world that NZ “health authorities” have erected and appear to even be boasting about – police are cracking down on alleged gang members and criminals driving back roads at night to make “illegal” chicken deliveries to deprived citizens in lockdown.

The two men, which press reports identified as a 23 and 30-year-old, face multiple charges under the country’s “Covid-19 Public Health Response Act” including up to six months in jail and a fine equivalent to almost $3,000. 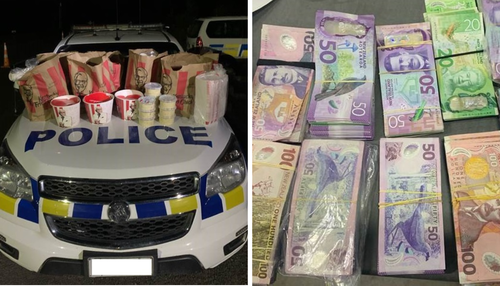 According to the BBC, police in Auckland recently arrested a man seen in a social media video leaving the quarantined city to purchase large quantities of McDonald’s meals just outside the lockdown zone. BCC noted of this latest KFC incident that is part of a trend of people with cravings increasingly making “risky late night food runs” despite facing prosecution under Covid laws.