Pope Francis on Saturday for the first time rebuked Russian President Vladimir Putin for launching a “savage” war on Ukraine, but stopped short of naming him directly.

“We had thought that invasions of other countries, savage street fighting and atomic threats were grim memories of a distant past,” the Pope said during a weekend visit to the Mediterranean, largely Catholic island of Malta. 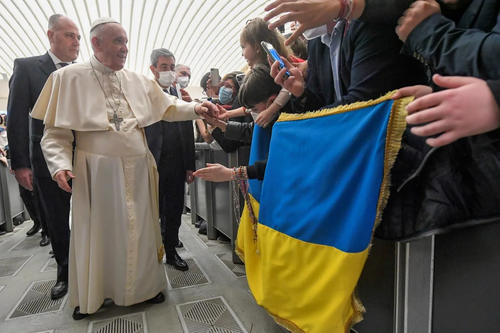 Yet it was clear precisely the world leader the Pope was referencing, given he immediately followed by saying, “Once again, some potentate, sadly caught up in anachronistic claims of nationalist interest, is provoking and fomenting conflicts, whereas ordinary people sense the need to build a future that will either be shared or not be at all.”

In prior statements he’s made on the conflict, he denounced the war but did not personalize it in the sense of calling out a specific “potentate” who is “fomenting conflicts”.

Last month, for example, he had urged the “massacre” to stop, which he called an “unacceptable armed aggression” – yet without naming Russia.

“Faced with the barbarity of killing of children, of innocents and unarmed civilians, no strategic reasons can hold up,” Francis said on March 19.

However, he’s previously only named Russia while offering prayers, and after Roman Catholic groups issued requests for him to “consecrate” Russia to the Virgin Mary.

Francis also for the first time confirmed that a potential trip to Ukraine’s capital of Kiev is “on the table” – this after last month offering to mediate a ceasefire between Russia and Ukraine. According to The Associated Press:

​​Francis told reporters en route to Malta that a possible visit to Kyiv was “on the table,” but no dates have been set or trip confirmed. The mayor of the Ukrainian capital had invited Francis to come as a messenger of peace along with other religious figures.

Another possibility is that the pontiff could simply go to Poland or another neighboring or adjacent Catholic-majority country, also akin to Biden speaking from Warsaw. While the vast majority of Ukraine adheres to the Eastern Orthodox Church, the Catholic minority in the country is commonly estimated at 3-4 million.