Just as last week ended, with a relentless meltup in the exponentially rising US dollar, coupled with a collapse in cable, the yen, yuan, euro and so on, not to mention stocks and bonds, so the new week begins only this time the moves are even faster, even more brutal and even more acute, as we approach the breaking point.

Case in point, after starting modestly higher, the meltup in the dollar accelerated, as the Bloomberg dollar index exploded to new all time highs…

… and is forcing Kuroda to sell even more tens of billions of US Treasurys, to cash into USDs which he will then sell for yen, in the process pushing up 10Y yields even higher, creating a toxic feedback loop of higher yields and an even higher dollar, sending yields higher and the dollar even higher.

But the imminent conclusion of Japan’s MMT experiment notwithstanding, the real highlight of the session so far has been the total collapse in sterling, whose implosion after Friday’s mini budget has accelerated and moments ago cable flash crashed to a new all time low of 1.0350, below the previous record low set in early 1985, and just millimeters away from parity as every single stop was taking out to the downside. . 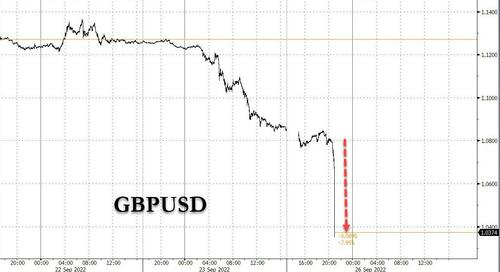 And since there is nothing at all to contain the now exponential move in the USD, now that the entire world is facing one massive, $20 trillion short squeeze in USD-denominated debt…

Every foreign company or state that has issued USD debt right now pic.twitter.com/ALE3X1nsez

… expect an emergency central bank meeting this week where panicking officials do everything they can to contain the dollar and to undo the tremendous damage the Powell Fed has unleashed on the world. Because in the end, it’s always the same.