Tropical Storm Fiona intensified into a Category 1 hurricane Sunday as it moved south of Puerto Rico, bringing heavy rains and high winds to some parts of the island.

Incredible imagery of Hurricane Fiona and the lightning within.

A storm that is absolutely slamming Puerto Rico with winds and torrential rains.

A difficult evening ahead. pic.twitter.com/3zcn32YCXa

Hurricane Fiona is the season’s sixth named storm and third hurricane. The storm moves west-northwest at 8 mph with maximum sustained winds of 85mph. As of 1400 ET, the National Hurricane Center said Fiona’s center was 25 miles south of Ponce, a city with more than 100,000 people on the island’s southern coast. 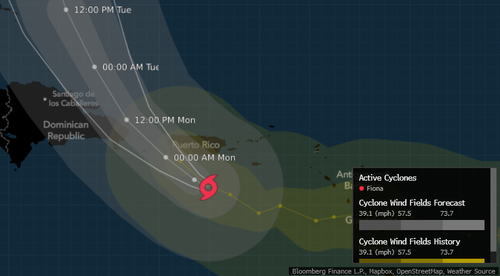 “Puerto Rico is 100% without power due to a transmission grid failure from Hurricane Fiona.”

Fiona’s path includes several large fossil fuel power plants. There’s no official confirmation on what power plants were disrupted or if downed transmission lines were the source of the outages. 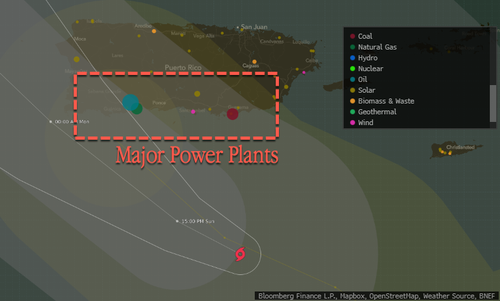 … and internet connectivity crashed with power blackouts across the island.

⚠️ Update: Internet connectivity across #PuertoRico is currently registering at 47% of ordinary levels amid reports of a widespread power blackout as Hurricane #Fiona moves in; meanwhile Luma Energy reports 51% of customers are now without electricity ⚡ pic.twitter.com/vmragZBliv

Hurricane models show Fiona’s future path could be out into the Atlantic by mid-next week. Models have yet to indicate US landfall, though nothing is locked in as far as the future path. 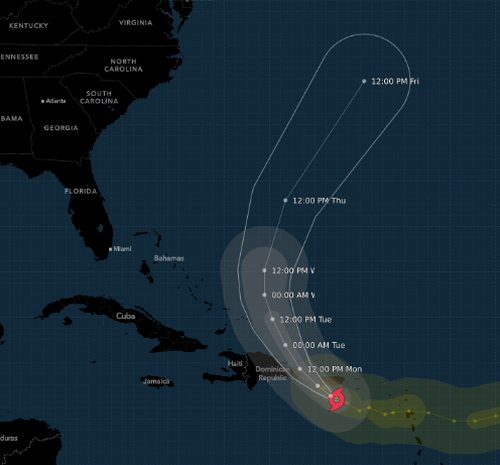