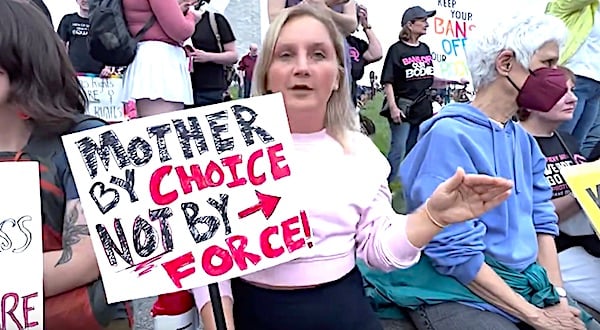 A pro-abortion activist takes part in the ‘Bans Off Our Bodies March’ in Washington, D.C., on Saturday, May 14, 2022. (Video screenshot)

Pro-abortion activists think President Joe Biden is the wrong leader for their cause given his Catholic faith and long history of opposing abortion, according to the New York Times.

Biden opposed abortion throughout most of his political career and is hesitant to discuss abortion explicitly, White House sources told the NYT. He changed his public stance on the issue over the past decade and became more pro-abortion, but activists feel he’s soft on the issue and not doing enough to promote abortion rights.

Biden issued two executive orders enshrining abortion access, including through protecting interstate travel for the procedure, after Roe was overturned. His administration has promoted abortion through the Department of Justice’s lawsuit against Idaho over the state’s abortion law, and Biden considered declaring a public health emergency to promote abortion access.

Some pro-abortion activists view these actions as insufficient and urge Biden to take stronger actions to promote abortion; they also wish Biden would discuss abortion explicitly rather than using euphemisms like “reproductive health care,” according to the NYT. His history of opposition to abortion makes activists skeptical that he’s really doing all he can to enshrine abortion.

In 1974, the year after the Roe decision first came down, Biden told a reporter he felt that it went too far, and voted in favor of a failed constitutional amendment overturning Roe in 1983. He softened his ant-abortion stance by 2008, when he ran for vice president alongside then-candidate Barack Obama, and cemented his public pro-abortion views during his own campaign for president.

“This is not necessarily the guy that I am sure most activists wanted in the seat when this happened,” Jamie L. Manson, president of Catholics for Choice, told the NYT in reference to the Supreme Court overturning Roe v. Wade. “It’s unfortunate because he has so much power and we need him to really get out of his comfort zone.”

The White House did not respond to the Daily Caller News Foundation’s request for comment.

39 mins ago
3,000-year-old canoe discovered in Wisconsin; canoe is the oldest ever found in the Great Lakes

39 mins ago
3,000-year-old canoe discovered in Wisconsin; canoe is the oldest ever found in the Great Lakes