By Michael Every of Rabobank

“Like riding a bicycle” is an idiom that says once we learn to do tricky things we never forget. However, all around us important people are forgetting how to ride their bicycles. US President Biden is one, but there are so many others it’s hard to keep track – or on the track. 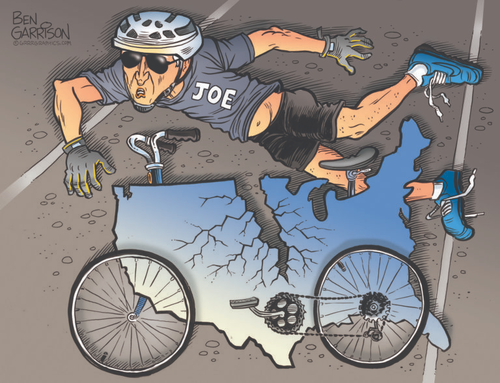 Friday saw the BOJ keep peddling away furiously at yield curve control, refusing to accept that if they cannot regain a large trade surplus then there is no way to cushion the downward effects on JPY. For markets, this tour de Japan towards the cliff-edge was taken as relief. Indeed, we saw mostly equity stabilization, and only a moderate drift higher in key bond yields.

Notably, there was a further collapse in crypto over the weekend, albeit with Bitcoin bouncing off key support. (On which, I was just told: i) it’s been here before, i.e., below the cost of mining; and ii) it’s worth holding in small amounts as a lottery ticket given the system is so rigged against the asset-poor young that there is no other way they can ever hope to retire with dignity. It’s not an “-ism” to base a political-economy on, but you get the drift.)

More notable, but less noted, Friday also saw widespread falls in commodities. So much so that I was tempted to run with the Daily title: ‘Ferrous Bueller’s Day Off’. At time of writing Brent oil was $114, down from $121 at its Friday peak, and having been under $112.

Is this the start of a generalized asset melt-down, including commodities, so at least longer-dated bonds get a bid despite Fed hikes? Or is it just a sell-off of performing assets to garner liquidity to cover margin calls on slumping ones? US voices provide evidence in both directions from the back of a tandem wobbling towards us at ever slower speed.

The Fed’s Waller argued for a 75bps hike again in July, and is “all in” on fighting inflation; yet also stressed rate cuts to zero and more QE are now policy tools for even a “typical” recession, and there is a “good chance” they will be used again by the Fed. As everyone except the Fed, and Treasury Secretary Yellen on TV on Sunday, sees a recession as inevitable, does that mean zero rates and QE are coming again soon to the US, BOJ-style?

There is a long article from historian Niall Ferguson at Bloomberg worth looking at here titled, ‘The Fed Hasn’t Fixed Its Worst Blunder Since the 1970s: Jay Powell wants us to believe he has what it takes to bring inflation under control. History warns us to be sceptical’. It concludes:

“Will the Powell Fed be more like the Burns Fed or the Volcker Fed? We won’t know for sure until it confronts something much uglier than the current equity bear market. All we do know is that Powell has blinked before now – and in response to a 19% stock market correction in late 2018 and a president with a Twitter habit. Trump’s successor is not much of tweeter. But the market is already down further.

I knew Paul Volcker. I also remember the 1970s. For younger viewers, it’s going to come as a shock to see That ‘70s Show for the first time. Spoiler alert: Not much about that decade was transitory. Try listening to the interminable guitar solos on “Stairway to Heaven” or “Free Bird” to get in the mood.”

One can see why the crypto crowd might be holding on to their Willy Wonka tickets in the hope they are ‘golden’, not melting like chocolate. Yet, if so, commodities will not stay down, and hence input inflation will stay high, and so will overall inflation.

High inflation is already guaranteed by geopolitics, as Robin Brooks of the IIF underlines: “Putin is cutting gas deliveries to Europe. Europe was always going to end up here – no Russian gas – except that an embargo would have allowed us to hold our heads high. As Churchill said: “You were given the choice between war and dishonour. You chose dishonour, and you will have war.”” And no gas. To which Germany is responding by burning more coal, having insisted on going ahead with shutting down its final nuclear power-plants this year.

Europe and the West certainly have economic war: and how anyone can make economic forecasts, or national, business, or energy strategy presuming they won’t reminds me of the inverse of the old adage about a fish needing a bicycle. Indeed, President Putin’s ‘Russian Davos’ speech on Friday accused the US of acting as though it is “God’s emissary on Earth,” presented Russia as the emerging leader in “a new world order,” that would confront the US superpower status and prosper (as Beijing underlines its non-military foreign-policy support for Moscow), and stressed, “Only strong and sovereign governments can speak their minds in this new-born world order – either that or they’re destined to remain colonies.”  We obviously see that in Ukraine, where NATO warns the war could drag on for years.

Bloomberg has another op-ed, from Max Hastings titled, ‘Putin May Win in Ukraine But Can Still Be Stopped’. It argues:

“In a famous, or rather notorious, address to a committee of the Prussian parliament in 1862, Otto von Bismarck said: “Not through speeches and majority decisions will the great questions of the day be decided” but by “Blut und Eisen” – blood and iron. We like to believe that civilized 21st-century societies have advanced beyond such brutish doctrine. Yet Putin is attempting to demonstrate that he can exploit extreme violence to secure a vastly larger role on the world stage than Russia’s economic and political stature confers.”

Yet we do not have economic forecasts to match, let alone national geoeconomic strategy. Making this point, military-expert Andrew Michta tweets, “Russia is at war, with its economy aligned accordingly. The West does not seem able to recognize fully how the world has already changed, for this would require us to make tough decisions concerning our own production. If we persist, it will cost us.” To which geostrategist @SariArhoHavren replies, “In Western Europe, I hear constant comments from ordinary people how this war is “unnecessary”, “look at the inflation”, “win or lose won’t affect us” – people have become lazy, selfish, taking freedom for granted and have forgotten their history. Maybe they deserve what is coming.”

Even in the US doing all the heavy lifting on Ukraine, and where Congress is about to push for a larger budget for the Indo-Pacific to match China, we see a report titled ‘The Return of Industrial Warfare’. It begins, “Can the West still provide the arsenal of democracy? The war in Ukraine has proven that the age of industrial warfare is still here. The massive consumption of equipment, vehicles and ammunition requires a large-scale industrial base for resupply – quantity still has a quality of its own.” It  concludes, “US annual artillery production would at best only last for 10 days to two weeks of combat in Ukraine.”

Yes, the US is not an artillery-based army like Russia’s. But it still has low stocks of almost everything for an extended war against a near-peer rather than a weak economy or a terrorist group. It ‘plans’ to fight a ‘just in time’ conflict…. against the country which provides much of its industrial supply chain(!), as tensions continue to rise in the Taiwan Strait.

There might be a Biden-Xi call ahead, but it risks ending like the financial tweet: “I’M IN THE PROCESS OF DECISION-MAKING ON CHINA TARIFF EASING. *BIDEN FALLS OFF BIKE WHILE COMING TO STOP, SAYS HE’S OKAY* can’t make this up!” 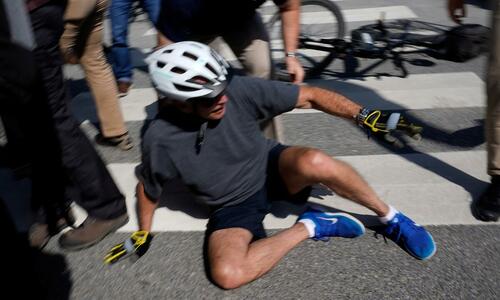 Perhaps the US president suddenly realized his bike would be marginally cheaper without tariffs, but would come at a massive geopolitical cost given China will, yet again, have given up nothing at all for that trade benefit; and that Yellen reiterating on TV there is no recession to come, and that some Trump tariffs on China were “not strategic” –as she also talks about “friend-shoring”– just shows she does not understand ‘strategy’; or ‘inflation’; or ‘recession’; or ‘financial crisis’.

On Friday, Putin also defiantly stated the West’s leaders are living in Lalaland, and “Such a detachment from reality, from the demands of society, will inevitably lead to a surge of populism and the growth of radical movements, to serious social and economic changes, to degradation, and in the near future, to a change of elites.”  Presumably he foresaw the French parliamentary election results, where President Macron looks set to lose his majority, with over half of the seats likely to be held by the far-right of Le Pen and the far-left of Melenchon. Good luck with technocratic pension reforms on that basis.

So, what do we do? Well, as Hastings argues, more of a focus on how to push back against Blut und Eisen, which means the West remembering how to ride the geopolitical grand strategy bicycle. Yet the US president can apparently neither walk-up stairs nor ride a bicycle without falling over, and much of the US economy is more worried about “Basis und Points.”

As I have argued, much higher US rates are still a huge geoeconomic weapon, even if they bifurcate an already bifurcating world. Much lower US rates and QE in the face of deliberate supply constraints are a great power self-destruct mechanism. And yet add high unemployment to our current economic misery, as the Fed’s Waller suggests it might need to rise to a 4.5% rate, and we better have an economic arsenal in our pocket ready.

I suspect, as with Europe, we get rate hikes and QE: and then we need trade surpluses to ensure currencies don’t collapse, which means national security/industrial/social policy. On which, note it was the realpolitik mercantilist Bismarck who also introduced state public pensions.

Hastings op-ed stresses, “The historic challenge for the West is to prove [Putin’s Ukraine] calculation mistaken, because its success would deal a shocking blow to the cause of democracy, freedom, and justice in the 21st century. Zelenskiy must rely upon Churchill’s dogged policy: KBO (“Keep Buggering On”) and pray that something will turn up.”

Yet Churchill’s heirs rely upon doggedly playing silly buggers and Western markets pray that lower rates will turn up. That, as we face years of war and the UN warning of “hell on earth”, as we ‘march towards starvation’, or a “shocking blow to the cause of democracy, freedom, and justice in the 21st century.”

Surely better to remember how to ride the Western bicycle?