As we move into the second half of 2021, interest rates and the dollar continue to shape the outlook.

Of course, much of the debate focuses on whether rates and the dollar continue to miss the bigger picture. For example, just recently, Jim Bianco tweeted a critical point. 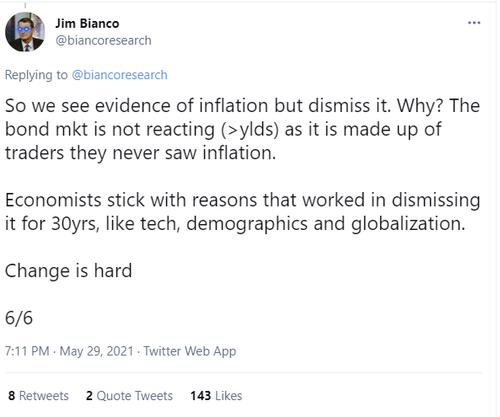 However, while I very much respect his opinion, I am not sure I entirely agree. Such is where the analysis of rates and the dollar suggests a different story.

We previously discussed that inflation might indeed be more transitory given the drivers of increased prices were artificial. (i.e., stimulus, semi-conductor shortages, and pandemic-related shutdowns.) To wit:

“Inflation is and remains an always ‘transient’ factor in the economy. As shown, there is a high correlation between economic growth and inflation. As such, given the economy will quickly return to sub-2% growth over the next 24-months, inflation pressures will also subside.” 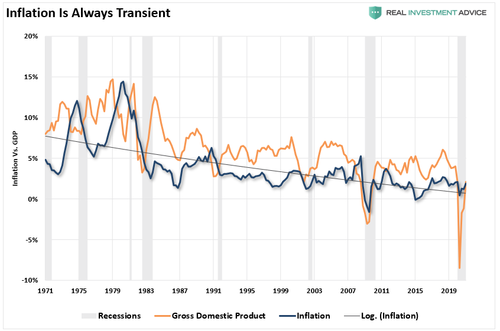 “Significantly, given the economy is roughly comprised of 70% consumption, sharp spikes in inflation slows consumption (higher prices lead to less quantity), thereby slowing economic growth. Such is particularly when inflation impacts things the bottom 80% of the population, which live paycheck-to-paycheck primarily, consume the most.”

However, another important factor behind inflationary pressures is an individual’s actions. As noted last week by Société Générale’s Albert Edwards:

“Surveys suggest that inflation fears have become investors’ number one concern. But why look at it that way? We could equally say it is investors’ own bullishness on the strength of this economic cycle that is driving prices sharply higher in the most cyclically exposed equity sectors and industrial commodities.”

“In inflation, as in many other areas of economic life, perceptions can form reality, and that is certainly true of inflation. The University of Michigan monthly survey of consumers’ expectations perennially shows shoppers foreseeing more inflation than will in fact arrive. The important factor here is the direction of travel. If they are more worried about inflation, they will do more to guard against it, which will tend to push up prices.”

Such is an important point, as Albert notes:

“When investors pile into commodities as an investment vehicle to benefit from rising inflation, they create substantial upstream cost pressures. Beyond the cascading effect of upstream commodity price pressures, headline CPIs are also quickly impacted as food and energy prices rip higher.”

In other words, investors cause inflation by their actions. However, this is where Albert keys in on another critical driver of inflation.

“In addition to this, the observation by investors that industrial commodity prices are rising only serves to reaffirm their belief about cyclical strength and rising inflation, most especially ‘Dr. Copper.” Many investors see copper as extremely sensitive to economic conditions.

The circular, or as George Soros terms it, ‘reflexive’ nature of financial markets makes them extremely vulnerable to being whipsawed. Yet because of the current extreme momentum, it would take a very heavy weight of evidence to convince this market to reverse direction.

We continue to highlight that commodity prices are at high risk of a major reversal because of the steep downturn in the Chinese Credit Impulse. We have highlighted this before and we are not alone. Julien Bittel of Pictet Asset Management posted the following chart.” 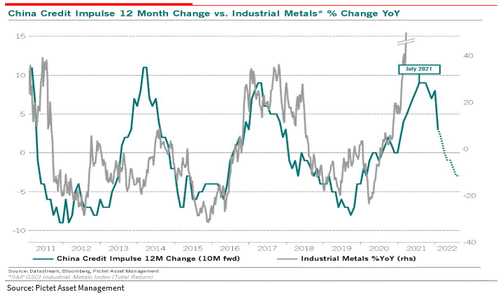 “When commodity prices do start to fall, expect a major reversal in inflation sentiment. Furthermore, expect momentum to become as self-reinforcing and reflexive on the way down just as it was on the way up.”

As we discussed previously, this is something the bond market already expects.

What Rates Are Saying About Inflation

While investors expect surging inflation, the bond market continues to price in weaker future economic growth. As noted in “No, Bonds Aren’t Over-Valued.”

“The correlation between rates and the economic composite suggests that current expectations of sustained economic expansion and rising inflation are overly optimistic. At current rates, economic growth will likely very quickly return to sub-2% growth by 2022.”

Note: The “economic composite” is a compilation of inflation (CPI), economic growth (GDP), and wages. 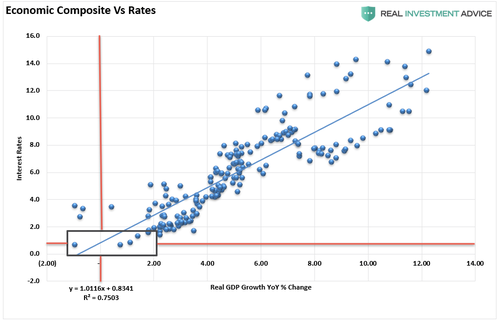 There is a fundamental reason why the bond market is pricing in deflation currently.

“The correlation should be surprising given that lending rates get adjusted to future impacts on capital.

As shown, the correlation between rates and the economic composite suggests that current expectations of sustained economic expansion and rising inflation are overly optimistic. At current rates, economic growth will likely very quickly return to sub-2% growth by 2022.”

The Fed Will Push Deflation

The problem for the Federal Reserve is that the fiscal and monetary stimulus imputed into the economy is “dis-inflationary.”

“Contrary to the conventional wisdom, disinflation is more likely than accelerating inflation. Since prices deflated in the second quarter of 2020, the annual inflation rate will move transitorily higher. Once these base effects are exhausted, cyclical, structural, and monetary considerations suggest that the inflation rate will moderate lower by year end and will undershoot the Fed Reserve’s target of 2%. The inflationary psychosis that has gripped the bond market will fade away in the face of such persistent disinflation.” – Dr. Lacy Hunt

The point here is that while economic growth may be booming momentarily, inflation, which is destructive when not paired with rising wages, will be transient. Given the massive surge in prices for homes, autos, and food, the reversal will cause a substantial disinflationary drag on economic growth.

The most considerable risk is a divergence among Fed policymakers which possibly leads to a policy mistake of tapering too quickly or even hiking rates.

The majority of the inflation and economic growth pressures are artificial, stemming from the stimulus injections over the last year. However, with those inputs fading as year-over-year comparisons become more challenging, the “deflationary” impact could be more significant than expected.

There is also one other point about the Fed tapering the purchases. As shown in the chart below, rates rise during phases of QE as money rotates from bonds to stocks for the “risk-on” trade. The opposite occurs when they start to taper, suggesting a decline in rates if “taper talk” increases. 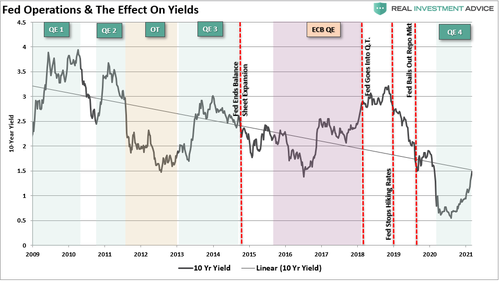 The Story Of The Dollar

While many view the US Dollar as a proxy for economic strength, there is very little correlation between the currency on a short-term basis. However, as shown below, there is a long-term trend of the dollar’s value as compared to economic growth. In other words, the value of the dollar does reflect economic strength over the longer term. 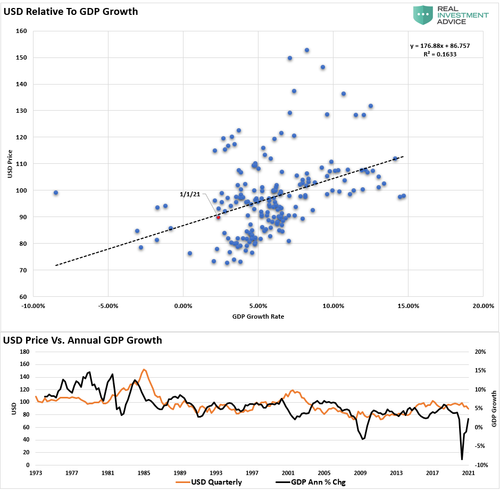 Currently, the U.S. dollar is weakening as the Government is flooding the system with liquidity. Now, the money supply is spiking, but given the relative surge in debt, the injections fail to spur an increase in monetary velocity. 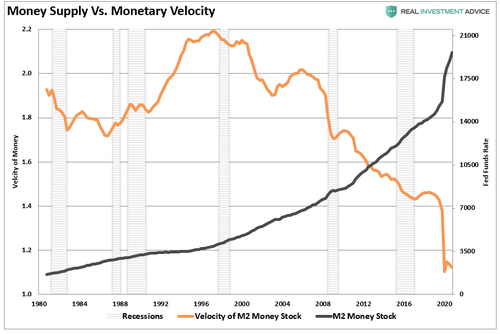 With the US dollar breaking down to the lowest level since 2014 and trading below its 2-year moving average, the risk of the dollar retrenching to “Financial Crisis” lows is not out of the question. 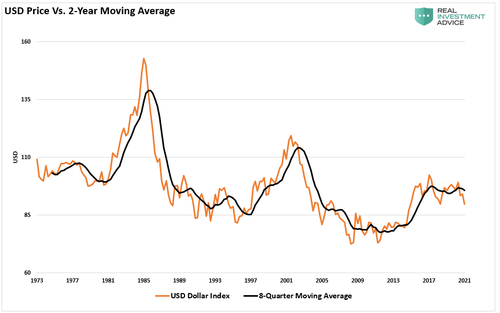 The massive increase in the US budget deficit as a percent of GDP also suggests that “deflationary” pressures weigh both on economic growth and the dollar. As Bryce Coward of Gavekal recently noted:

“The ballooning budget deficit suggests a level of 70 or 80 on the US dollar index over the coming years would not be out of the realm of possibilities. That would equate to a further decline of 11% to 22% from here. If the US dollar drops below $90 such would have fairly large ramifications for equities.” 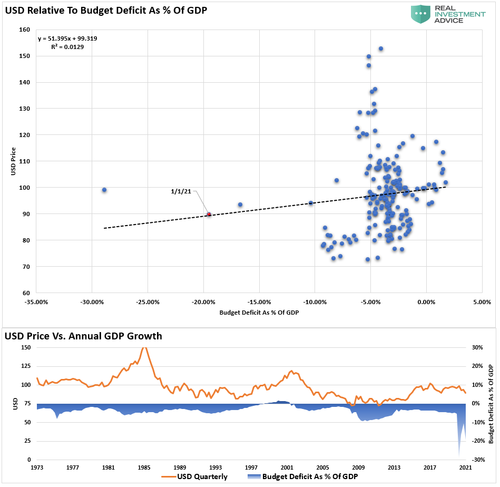 The Fed May Be Right For The Wrong Reason

With double-digit rates of change in essential items like transportation (going back to work), food, goods and services, and energy, the impact on disposable incomes will come much quicker than expected. If we strip out “housing and healthcare,” which are fixed budget items (mortgage and insurance payments), we see that “household” inflation is pushing 5.86% annualized. 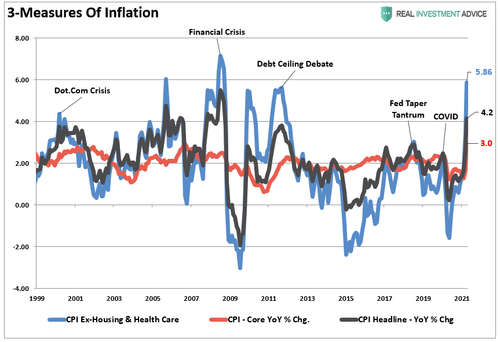 Such is particularly problematic when wages aren’t keeping up with inflation. 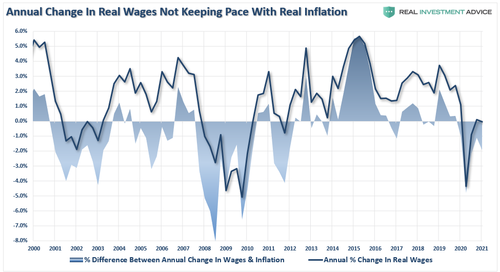 The Fed is probably right. Inflation will be transitory, but for all the wrong reasons.

There is a significant difference between a “recovery” and an “expansion.” One is durable and sustainable; the other is not.

Those expecting a significant surge in inflation will likely be disappointed for the one reason which seems to get mostly overlooked.

“If the economy was growing organically, which would create stronger rates of wage growth and inflation, then there would be no need for zero interest rates, continued monetary interventions by the Federal Reserve, or deficit spending from the Government.”

The obvious problem is that not all “spending” is equal. Pulling forward consumption through stimulus is indeed short-term inflationary but long-term deflationary. Since 1980, there has been a shift in the economy’s fiscal makeup from productive to non-productive investment.

As we have pointed out previously, you can not overstate the impact of psychology on an economy’s shift to “deflation.” When the prevailing economic mood in a nation changes from optimism to pessimism, participants change. Creditors, debtors, investors, producers, and consumers change their primary orientation from expansion to conservation.

As we have been witnessing since the turn of the century, these behaviors reduce the velocity of money. Consequently, the decline in velocity puts downward pressure on prices. Given the massive increases in debt and deficits, the deflationary drag continues to increase as stimulus fades from the system.

Likely, the dollar and rates already figured this out.