The Republicans will take back control of the House of Representatives by a narrow margin, ushering in a new era of divided government in Washington after Democrats retained a majority in the Senate in unexpectedly close US midterm elections.

More than one week after tens of millions of voters headed to the polls in the midterms, the Associated Press said on Wednesday evening that the Republicans would gain a majority in the House, the lower chamber of Congress, after claiming the required 218 seats.

The size of the majority was still unclear as seven House races remained too close to call. But it was on course to be significantly smaller than expected — a result that weakens the Republicans’ hands while exposing sharp divisions in the party’s ranks and casting doubt on whether Kevin McCarthy will become Speaker of the House.

Earlier this week McCarthy won a secret ballot to become his party’s nominee for Speaker, by a margin of 188 to 31 votes. But defections from rightwing members of Congress loyal to former president Donald Trump indicated McCarthy will face a rocky road heading into January, when he will need support from at least 218 lawmakers for the top job.

Meanwhile, Trump on Tuesday night formally declared he would run for president for a third time, even as Republican lawmakers privately and publicly urged him to step aside after several of his handpicked candidates failed to win their races in last week’s midterms.

The former president has also confronted an exodus of high-profile donors, including Blackstone chief executive Stephen Schwarzman, who issued a statement on Wednesday saying: “It is time for the Republican party to turn to a new generation of leaders and I intend to support one of them in the presidential primaries.”

Midterm elections have historically served as a referendum on the party in power, and many Democrats had braced for bruising losses in the run-up to polling day, especially in the House.

But Biden’s party did better than expected in House and Senate races across the country, holding on to several crucial seats. Democrats stemmed losses in places such as Michigan, Pennsylvania and Virginia, although notably they lost ground in New York and Florida, where the Republicans flipped a combined seven House seats.

It became clear at the weekend that Democrats would also maintain control of the Senate, the upper chamber of Congress, after Biden’s party secured narrow victories in races in Nevada and Arizona. The size of their razor-thin majority in the upper chamber will be decided next month in a run-off contest in Georgia between incumbent Democratic senator Raphael Warnock and Republican Herschel Walker.

In a contest that further exposed the fractures and recriminations among Republican lawmakers, Senate Republicans held their own leadership elections on Capitol Hill on Wednesday morning, in which Mitch McConnell, the longtime Republican leader in the upper chamber, was challenged by Rick Scott, who led the GOP campaign effort heading into the midterms. McConnell was easily re-elected, receiving 37 votes, compared to 10 for Scott, who was backed by Trump and some rightwing senators. 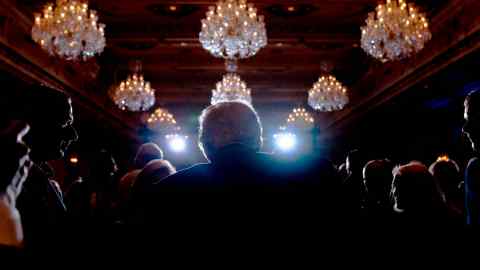 While Democrats will retain the Senate, and the Republican majority in the House will be slimmer than expected, the changing of the guard in the lower chamber will nevertheless handicap the next two years of Biden’s presidency. GOP leaders have suggested they will use the debt ceiling as leverage to push through their own policy priorities, namely cuts to federal spending.

Republicans have also indicated they will disband Democrat-led investigations, including the special committee probing Trump’s role in the January 6, 2021 attack on the US Capitol, and launch their own inquests into everything from the origins of the Covid-19 pandemic to the business dealings of Hunter Biden, the president’s son.

In his statement on Wednesday, Biden struck a bipartisan note, saying he was prepared to work with Republicans over the next two years of his presidency: “The American people want us to get things done for them.”

The Associated Press also on Wednesday declared Democratic congresswoman Karen Bass the winner in the hotly contested Los Angeles mayoral race. Her opponent was billionaire property developer Rick Caruso, a former Republican who switched parties to become a Democrat. He spent some $100mn on his campaign, in a contest that exposed long-simmering tensions about crime and homelessness in the southern California city.