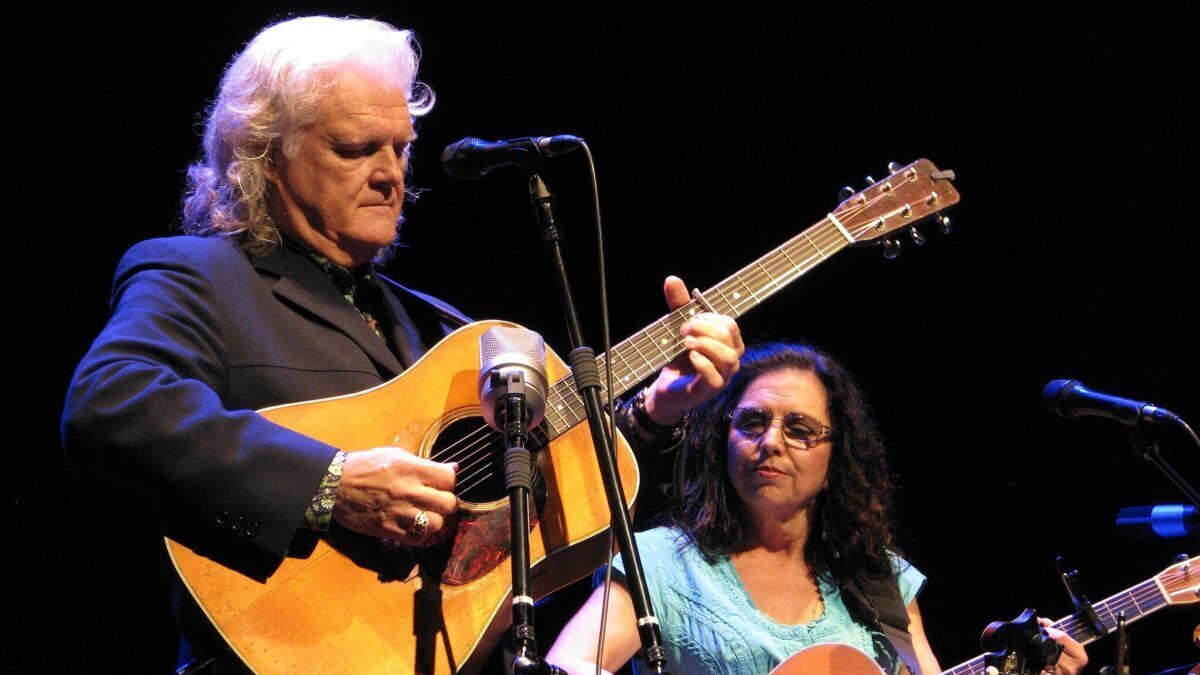 There are few musicians with as impressive a resume as Ricky Skaggs, touring this year with his excellent band Kentucky Thunder. He’s a member of the Country Music, Bluegrass, and Gospel Music Halls of Fame. He’s won 15 Grammys. He has 11 No. 1 country singles, four No. 1 country albums, and seven No. 1 bluegrass albums to his name. But, as Skaggs told me in a recent interview, it’s his Christian faith he’s most proud of.

Listening to Skaggs for years, I knew he was a religious man. But seeing him live in early January, I was amazed at how central religious faith is to his act. “We don’t start our show with gospel, we don’t want to hoodwink people,” said Skaggs. But about halfway through the show guitarist Dennis Parker, a former alcoholic who spent time in jail, offered a riveting personal testimony of faith and redemption that left many in the audience in tears and elicited congratulatory applause.

Early in his career, Skaggs would sometimes hear complaints from audience members about his openness about his faith. “One guy wrote a letter complaining that he didn’t pay $100 to hear a sermon. So I sent him a check for $100,” Skaggs recounted. “We play great music with such quality and such finesse. These musicians are at the top of their game. I feel like God wants us to earn the right to share with the audience. It just is something we should do. They see that we’re just normal people, we love our country, we love God, and we love y’all too. And we’re just gonna share as we do, and make it part of the whole performance.”

Skaggs thinks audiences are more receptive to hearing about the gospel than they were even a few years ago. “We couldn’t have done the things we’re doing now but with all the latest craziness, the virus and all that, the temperature of people having a stomach to listen to the gospel is much, much better than it was pre-pandemic,” he observed. “People are seeing the writing on the wall. They’re seeing the way our nation is turning. God does not let those prayers go to waste. People are given another chance. God is the God of the second, third, fourth chance — he’s got all kinds of chances.”

A Virtuoso from Youth

Skaggs has certainly had his fair share of chances in life. His father Hobert bought him his first mandolin at the age of 5, and the very next year he performed at a concert led by Bill Monroe, widely considered the man who turned bluegrass into a true musical genre.

“Mr. Monroe pulled me up like a sack of dog food onto the stage. He took his mandolin off, which is now in the Hall of Fame, and let me play it,” Skaggs said. The year after that, he appeared on Lester Flatt and Earl Scruggs’ syndicated TV show, earning $52.50 for the appearance, his first paycheck for a musical performance. “I think I am more in awe of it now than I was back then,” mused Skaggs.

Remembering his introduction into stardom, Skaggs explains: “My father made friends with a backstage guard at the Grand Ole Opry.” One day while playing his mandolin in the hallway there, Earl Scruggs walked by, encouraging him and praising his musicianship. Scruggs offered Skaggs an audition for the show. By his early 20s, he had played with most of the biggest names in bluegrass, including Ralph Stanley and the Clinch Mountain Boys (perhaps most famous for Stanley’s contribution to the soundtrack “O Brother, Where Art Thou?”)

In time, Skaggs turned to country music, serving as a multi-instrumentalist for Country Music Hall of Fame singer Emmylou Harris. His performance on her 1980 album “Roses in the Snow,” which also featured Johnny Cash, Willie Nelson, and Dolly Parton, serves as a great introduction to his work. He signed with CBS Records in 1981 and became a country phenom — producing great hits like “Highway 40 Blues” and “Uncle Pen” — but he eventually returned to his bluegrass roots with his great 1997 album “Bluegrass Rules.”

Skaggs has been playing with Kentucky Thunder ever since. “My bluegrass work now is much, much better than it was pre-country when I was playing with Ralph Stanley,” he explained. “I love instrumentals, and this band plays them so much better than when I heard them.” (What Skaggs means is that he doesn’t sit down to write music, but hears it and then puts it to instruments.) “I love the things with harmony, like ‘The Darkest Hour.’ These young bucks want Skaggs’ band to play as fast as they can play. But the old man is slowin’ down a little bit.”

If Skaggs is slowing down, it doesn’t show in his live performances. Many songs still exhibit the speed, virtuosity, and cleverness he first revealed in that first old black-and-white performance. Of course, anyone who has seen Chris Thile reimagine Bach on the mandolin or Béla Fleck storm new heights on the banjo knows bluegrass has evolved and diversified in its character.

“It’s gotten so much more popular. It’s amazing to see how it’s grown. The different sounds in bluegrass now. More popular and modern sounds,” said Skaggs. “But in my heart, I want to go back and honor the old fathers. Part of my journey and call is to have a standard for who is playing real true bluegrass. The heart and soul and core is based in traditional bluegrass.”

Skaggs and the band nevertheless do their fair share of new songs in their concert. “We’re still kinda learning some songs that we aren’t real comfortable with yet,” he added, speaking of their recent show in Virginia. And when introducing every member of Kentucky Thunder during the concert, he gives the musicians a chance to perform some of their own original material.

When asked what he is most proud of, Skaggs responded: “All these accolades are wonderful to have. The ones that are most meaningful to me are right here in my living room. The National Medal of Arts from President Trump. It’s really amazing my life has meant more than just a certain genre of music. They took into consideration a lot of things.” He added:

I see my diploma for high school, a promise I made to my mom that I had reneged on. … But I’m more grateful, the most grateful for my life in Christ. Just knowing my name is written in His book, the Book of Life. Those are the kind of things that you can take out of this world with you, whereas these things won’t be around one of these days, all of these awards and stuff.

He’s also proud of his role in promoting bluegrass as an old and veritable American musical tradition. Remembering the great Bill Monroe, Skaggs declared: “We were great friends and I saw him a lot when he was in the nursing home.” Monroe in those final days would wonder what would happen to his music when he passed. “Mr. Monroe, your music is so big, so worldwide, it will never die. It will outlive your kids, grandkids, all of us,” Skaggs told him. “I will always tell people who you are and what you did.”

Speaking of friendships, Skaggs also has one with the Scalia family. He would regularly invite the late Supreme Court Justice Antonin Scalia and his family to his shows when he played in the Washington, D.C., area. He’s still friends with the justice’s son, Paul, a Catholic priest. He’s also proud of the fact that not long ago he was kicked off both Facebook and Instagram.

“I don’t remember what I said, but Facebook deemed it inappropriate. What the heck did I even say?” It might have been political, Skaggs conjectured, though he quickly added: “I’m going to tell the truth about what’s going on. But I thank the Lord for it. He is jealous of my time.”

When Skaggs was contemplating making the turn away from country and back to his bluegrass roots — and smaller venues for shows — he kept returning to the idea that he needed a “simple life.” After hearing a country song with that title, he was convinced this was God’s calling for his career. “When you don’t have a career, your career has you,” he said.

“If we do four or five dates in a row that’s a big weekend for us,” Skaggs explained. “I just don’t like being away from home that long.” Indeed, when I talked to Skaggs for the interview, he was at his home helping his wife, country music star Sharon White (whom he calls “Miss Sharon”), with her father, who has Alzheimer’s. “People have a whole lotta pain. And that’s the best way to find yourself and find who God is through pain. That oyster must feel a whole lotta pain until that pearl comes out,” offered Skaggs.

Thankfully, God made Ricky Skaggs and Kentucky Thunder — perhaps the best show in 2023 — to help make our painful lives a little more pleasant.