Earlier today, when we discussed the bizarre sale of AMC stock at a premium to its Friday closing price, we speculated that this was nothing but an extremely shady backroom ploy between AMC CEO Adam Aron and Mudrick Capital to force even the staunchest bears to cover their shorts, in the process allowing Mudrick to offload not just the 8.5 million shares the fund had purchased at $27.12, but the millions of shares it owned from purchases made far lower.

Specifically, we quoted AMC CEO Adam Aron, who will soon be facing a plethora of lawsuits claiming collusion, who said that “with this agreement with Mudrick Capital, we have raised funds that will allow us to be aggressive in going after the most valuable theatre assets, as well as to make other strategic investments in our business and to pursue deleveraging opportunities.” And, as we said at 8:28am this morning…

“what he really meant is that Mudrick is only in it for the ride as long as upward momentum remains. Once it reverses, the hedge fund will bail leaving retail investors stuck holding the bag.”

Just 4 hours later we were proven right, because moments ago AMC stock, which was once again the most traded company in the US stock market by value… 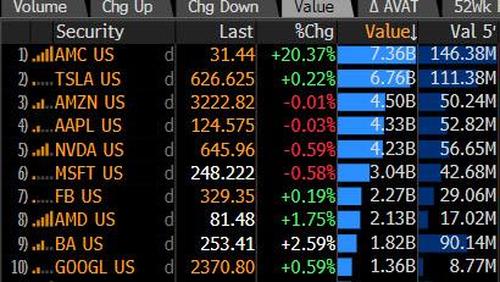 … tumbled after Bloomberg reported that Mudrick Capital – which earlier today was the sole buyer in AMC’s entire $230MM equity offering – sold all its stock in AMC Entertainment Holdings. 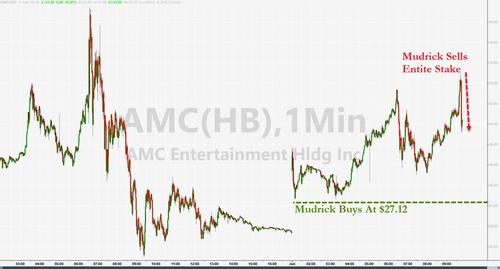 It gets better: not only did Mudrick no longer hold any AMC shares as of Tuesday and sold its entire position, including what it bought at $27 this morning, at a profit to reddit bagholders (just as we said it would), but the firm “disposed of its stake after concluding that AMC’s stock is overvalued, propped up by a recent wave of day-trader enthusiasm.“

Confused? Here is our post-mortem:

So Mudrick schemed with AMC to buy stock at a premium only to supercharge the short squeeze and dump it all to retail investors.

Where is the SEC?

And for the visual learners:

What is remarkable is that at this moment, AMC stock should be much, much lower, and yet it is just down $2 from when the Mudrick news hit. How come? Because as the next chart shows, the gamma meltup has been engaged and now has a life of its own… 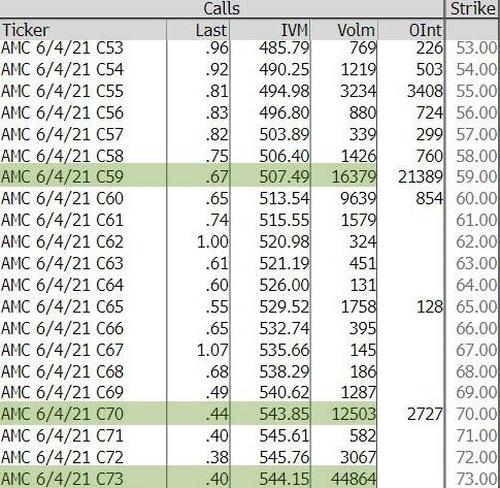 … as the flood of calls maturing this Friday at a strike price as high as $73 has forced the dealers to scramble and buy the stock, even as the very sophisticated entity that purchased today’s secondary has already flipped it to retail investors who are left holding the bag on a company that is probably worthless.