Adding to its prodigious losses – its shares have fallen more than 70% YTD – shares of electric carmaker Rivian continued to tumble on Monday following reports that Ford and another investor are looking to sell their shares at a discount as the company’s post-IPO lockup finally expires, allowing insiders to cash out (while their shares are still worth something). 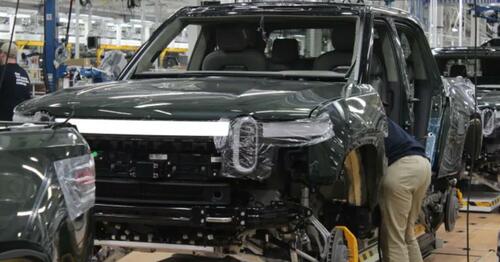 CNBC reported Sunday that Ford is to offer 8 million Rivian shares via Goldman Sachs, while JPMorgan is readying a sale of 13 million to 15 million shares belonging to other insiders.

Rivian shares were down nearly 10% at their peak during the pre-market selloff. 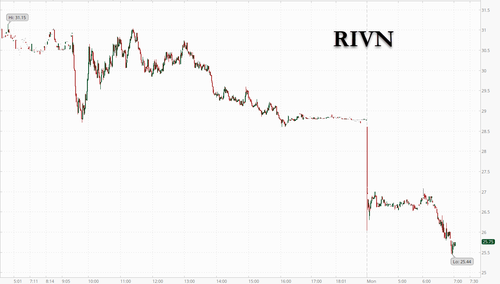 Rivian’s IPO was a memorable one, and emblematic of the profit-less tech craze that characterized the pandemic-era market. It was the sixth biggest IPO in US history, generating more than $13 billion to fund growth for the EV-maker, unfortunately, production of its products at its plant in Normal, Illinois has lagged due to supply-chain pressures. Back in March, the company said it expected to produce 25,000 electric trucks and SUVs this year, as the start-up battled through supply chain constraints and internal production snags. That would be just half of the vehicle production it forecast to investors last year as part of its IPO roadshow.

Late last month, Amazon and Ford revealed that they had lost a combined $12.3 billion on their Rivian investments.