One day after Robinhood shares exploded 50% higher as the start of options trading allowed a furious gamma squeeze to pin shares at $70, and with HOOD stock more than doubling in the past few days after a dismal IPO, this morning Robinhood shares tumbled as much as 12% in premarket trading Thursday after shareholders filed to sell 97.88 million shares less than a week after its initial public offering.

None of the proceeds will be received by the company, with the selling stockholders getting all of the funds from the sales, according to a filing with the U.S. Securities and Exchange Commission. 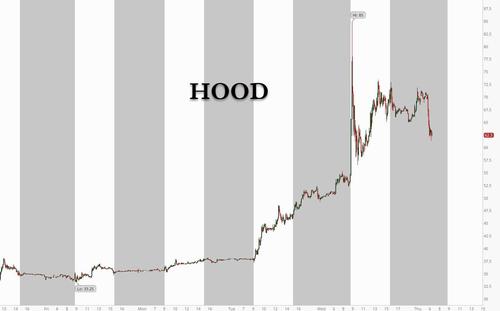 The move comes just a day after a flood of retail traders joined larger investors, such as Cathie Wood’s flagship ARK Innovation exchange-traded fund, in buying the stock.

Remarkably, one month ago we noted that in a change from usual lockup procedures, HOOD insiders would be allowed to sell up to 15% of their holdings as soon as the first day of trading, which many of them did resulting in the dismal first day performance post IPO. And now, thanks to the bizarre surge higher, the temptation proved just too much, and insiders plan on continuing their dump from the vastly overvalued stock.

The only question we have is whether the SEC will continue focusing all its brainpower on the pure evil that is bitcoin or take a look at the glaring manipulation before its eyes.