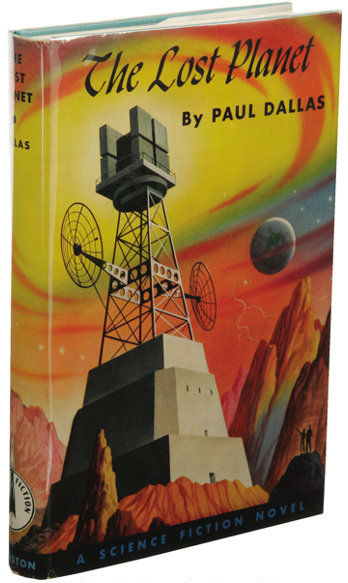 The following article, Rocking the Foundation of Opposing Worldviews, was first published on The American Vision.

In the 1950s, the John C. Winston Company, later to become part of Holt, Rinehart and Winston, published “Adventures in Science Fiction,” a series of juvenile hardcover novels that made up a collection of thirty-six books.

Some of the world’s greatest science fiction writers got their start with the series: Arthur C. Clarke, best known for 2001: A Space Odyssey, Ben Bova, Lester Del Rey, Donald Wollheim, and Poul Anderson. The books carried an original price of $2.00. Today, depending on condition, scarcity, and the author, a first edition/first printing with a dust jacket can bring a high price. For example,  Ben Bova’s The Star Conquerors is considered to be the rarest of all the Winston Juvenile books published. A first edition/first printing copy is offered for sale on several sites for more than $1,000. An autographed copy is for sale on the internet for $2000.

In addition to the wonderful stories, the books are worth collecting for the cover art. While the books are dated in terms of technology (the use of computers is minimal and email was non-existent), the stories reflect the moral worldview of post-World War II America trying to find its footing. Civil religion was in vogue. In 1954, in response to the Communist threat of the times, President Eisenhower encouraged Congress to add the words “under God” to the original Pledge Allegiance that was written by socialist Francis Bellamy and published in The Youth’s Companion on September 8, 1892. Bellamy’s daughter objected to the addition.

A young person reading these books would find a great deal of borrowed capital worldview wisdom sprinkled throughout the 200+ pages of these fascinating science fiction novels like I did. One particular scene caught my attention in the 1956 novel The Lost Planet by Paul Dallas, a story about how two teenagers try to stop a war between their home planets. The scene takes place just before the teenager from Earth boards a spaceship and travels to the distant planet of Poseida which is partially underwater.

In a discussion after a Christmas dinner, the topic turns to defend earth “against an aggression from space” brought up by General Watkins. He then describes the proper tactic:

As he spoke, the general seemed to become preoccupied with thoughts of the military situation, and he absently deployed salt and pepper shakers with knives and forks on the table, setting up in front of him an imaginary military problem in the field. “It is a basic truism,” he continued, “that wherever possible the best defense is a good offense. Now if we are attacked,” and he brought a piece of silverware in toward the plate that was obviously representing Planet Earth, “not only do we defend the point under immediate attack but,” and here several pieces were quickly moved from the plate Earth to the butter dish from which the attack had originated, “we immediately counterattack at the source of the aggression. After all, if you cut off the head, you have no need to fear the arms.” [1]

This book is a game-changer. It is THE apologetics manual from THE master apologist. “We must not be satisfied to present Christianity as the most reliable position to hold among the competing options available. Rather, the Christian faith is the only reasonable outlook available to men.” — Dr. Greg L. Bahnsen

Dallas has the General making a crucial point about fighting and winning against an enemy combatant that applies to ideological conflicts. Defending the Christian worldview against unbelieving thought takes an understanding that every worldview has a centralized guiding principle that serves as its foundational operational assumption about the nature of reality.

We should never forget that opposing worldviews also have a fixed starting point on which they reason from. Such a standing place—a pou sto—is inescapable. The goal is to rock the foundation of opposing worldviews. Instead of blasting away from a battleship by way of particulars, our efforts to undermine unbelieving autonomous thinking is better done by a submarine. Damage the hull and the ship with all its particulars sink.

Numerous starting-points are put forward as the foundational basis for unbelieving thought. Here’s a sample:

And if specific philosophical systems like the above are not enough to establish an authoritative starting point, then there is the appeal to any number of self-proclaimed or institutionally sanctioned experts: a brilliant college professor, the writings of a Zen Master, the directives of a cult leader, the latest scientific studies, the writings or revelations of self-appointed religious leaders, statistical analysis, opinion polls, the Constitution of the United States, psychics, fortune tellers, frequently quoted philosophers, newspaper and magazine editors, judges, television news anchors, Oprah, the high-minded opinions of Hollywood actors, or even alien life forms.

A worldview and apologetics rolled into one. You will learn how to torpedo the opposition with foundational principles and show the consequences of unbelivieving thought.

Even some atheists hope against hope that someone (other than a personal God) is “out there” to give meaning to the cosmos. Abandoning pure materialism, some are proposing that “an invisible force is at work” in the ever-evolving universe. [2] The materialists have become mystics. Maybe it’s from watching too much Star Wars. Of course, when the ever-changing worldviews of a splintered secularism fail to live up to their claims of ultimacy, the university is quick to shut out competitive debate. Speech codes abound. Contrary opinions are suppressed. Outside speakers are shouted off the stage if they ever make it on campus in the first place. The entrenched university worldview—no matter how discredited—must be protected at all cost, even though it’s a philosophical house of cards.

So-called experts, no matter what their field of study or how much information they gather, are finite in knowledge and fallible in practice. Put simply, they don’t know everything, and they make mistakes. For every group of experts who claim to know something authoritatively, there are always other groups of experts who claim they can dispute the findings of the first group of experts. The Bible describes it this way: “The first to plead his case seems just, until another comes and examines him” (Pr. 18:17).

Christopher Cerf and Victor Navasky, after compiling thousands of expert opinions and declarations about innumerable subjects over thousands of years, summarize their findings:

In brief, “Just because most of the authorities in a field are shouting in unison that they know the truth, it ain’t necessarily so.” [4]