China’s imports of crude oil and coal imports from Russia exploded in August, data showed on Tuesday, but despite the jump in supply, Russia handed back its top oil supplier ranking to Saudi Arabia for the first time in four months, even as coal exports hit a record high.

According to data from the Chinese General Administration of Customs, imports of Russian oil, including supplies pumped via the East Siberia Pacific Ocean (ESPO) pipeline and seaborne shipments from Russia’s European and Far Eastern ports, totalled 8.342 million tonnes, up 28% Y/Y, the equivalent of 1.96 million barrels per day (bpd), and just slightly off May’s record of nearly 2 million bpd. China is Russia’s largest oil buyer, especially now that most of the western world has sanctioned Russian energy. 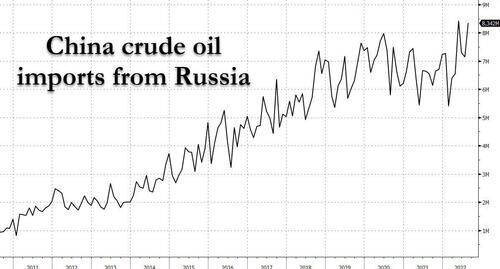 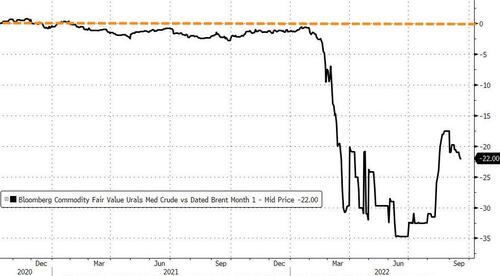 But despite the full price, imports from Saudi Arabia rebounded last month to 8.475 million tonnes, or 1.99 million bpd, 5% above the year ago levels, and just inching out Russia for the top spot.  Saudi Arabia also remains the biggest supplier on a year-to-date basis, shipping 58.31 million tonnes of oil from January to August, down 0.3% on the year, versus 55.79 million tonnes from Russia, which was up 7.3% from the year ago period.

In total, China crude oil imports in August fell 9.4% from a year earlier, as outages at state-run refineries and lower operations at independent plants caused by weak margins capped buying.

The table below shows imports by country, with volumes in metric tonnes and percentage change calculated by Reuters. 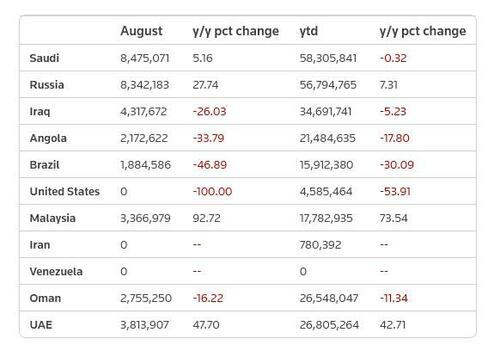 The strong purchases of Russian oil continued to weigh on competing supplies from Angola and Brazil, which fell in August by 34% and 47% year-on-year, respectively. Customs reported no imports from Venezuela or Iran last month. State oil firms have shunned purchases since late 2019 for fear of falling foul of secondary U.S. sanctions, although many still engage in illicit trade which is not disclosed on the books. One such company is defense-focused China Aerospace Science and Industry Corp (CASIC) which moved 25 million barrels of Venezuelan crude into China since late 2020, which Chinese customs does not report.

Tuesday’s customs data also showed imports from Malaysia, often used as a transfer point in the past two years for oil originating from Iran, Venezuela and more recently Russia, nearly doubled from a year earlier, to 3.37 million tonnes, or 794,000 bpd.

China did not import any crude from the United States, data showed.

But it wasn’t just Russian oil that Beijing was waving in: China’s coal imports from Russia also exploded in August, exceeding last month’s level and hitting the highest in at least five years, as power utilities in the world’s biggest coal consumer sought overseas supplies to meet soaring demand in extreme hot weather.

Arrivals of Russian coal last month reached 8.54 million tonnes, up from the previous peak of 7.42 million tonnes in July and 57% higher than in the same period last year, Chinese customs data showed on Tuesday. In fact, the monthly figure was the highest on record, since comparable statistics began in 2017.

Prices for Russian coal have climbed as both China and India stepped up buying, traders said, but were still cheaper than the domestic coal of same quality. Russian thermal coal at 5,500 kcal on delivery basis to China was assessed at about $155 a tonne in late August, up from about $150 a tonne a month earlier.

As Reuters notes, after a severe drought and heatwave hit western and southern China from late July, coal-fired power plants geared up production to meet the spiking demand for air conditioning and the supply gap from hydropower stations. They also increased purchases of higher quality thermal coal, such as Russian coal, to improve electricity generation efficiency.

China brought in 15.82 million tonnes of the dirty fuel from its top supplier Indonesia in August, 35% higher from July, data showed. But that was still lower than the 17.3 million tonnes imported in August last year.

The increase of Indonesian coal purchases came as lucrative prices encouraged utilities to place more orders. In August, Indonesian 3,800 kcal thermal coal was about 170 yuan ($24.26) a tonne cheaper than the same quality Chinese coal, and 4,700 kcal coal was 140 yuan lower.

Power utilities are expected to increase imports in October to replenish stocks ahead of the kick-off of the heating season in most of northern China in mid-November.

20 mins ago
Is the church in America really dying?

20 mins ago
Is the church in America really dying?

60 mins ago
Wheel of Fortune’s Vanna White, 65, reveals her intense workout schedule in order to ‘fit into sample sizes’