Russia’s defense ministry (MoD) released a video showing the successful test-fire of a new hypersonic missile on Monday, ahead of what could be a massive rollout to naval ships and submarines.

“The Zircon missile successfully struck the target in the White Sea with a direct hit at a distance of over 350 kilometers. The test confirmed the tactical and technical performance of the missile, and its flight speed was around Mach 7,” Russia’s MoD said in a statement.

The launch was conducted from an Admiral Gorshkov-class frigate located in the White Sea on the northwest coast of Russia. The missile reportedly struck a land-based target 350 kilometers (217 miles) on the coast of the Barents Sea. 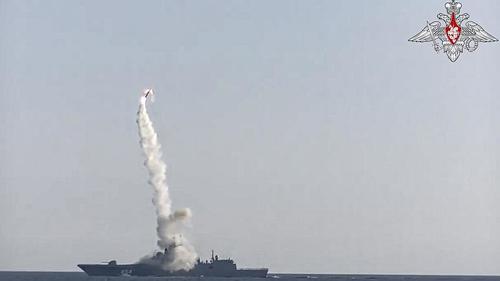 Russian President Vladimir Putin has said the Zircon missile could travel upwards of Mach 9, or about 6,900 mph and a distance of 1,000 kilometers (621 miles).

The missile has conducted recent tests where Putin described the launches as a “great event not just in the life of our armed forces but for all of Russia.”

Against a backdrop of soaring tensions between NATO and Russia, Moscow is in the process of deploying numerous hypersonic weapons that Putin deems “invincible.”

Only Russia and China have fielded hypersonic weapons while the US continues to lose military supremacy as the gap of when US hypersonic missiles are deployed continues to widen.

Russia’s MoD released a video of the launch.