With post-mortem after post-mortem after FTX port-mortem piling up, even as the questions surrounding the world’s biggest crypto fraud and bankruptcy pile up at an even faster pace amid a breathless demand for answers – like where did all that $8 billion really go – on Saturday we learned that as part of the firm’s shambolic bankruptcy process, FTX won’t even disclose its top creditors and has asked the bankruptcy judge to keep the company’s list of creditors (which previously was said to be larger than one million) under confidential seal.

So amid the mounting confusion, on Saturday FTX Trading unveiled that it had started a “strategic review of their global assets to begin to maximize recoverable value for stakeholders“, as part of what promises to be a very lengthy bankruptcy process (which will quickly become a Chapter 7 unless someone reveals where that $8 billion stolen by SBF has been parked), and has hired Perella Weinberg Partners LP to help with the potential sale of any viable units.

“Based on our review over the past week, we are pleased to learn that many regulated or licensed subsidiaries of FTX, within and outside of the US, have solvent balance sheets, responsible management and valuable franchises,” FTX Group’s new CEO, Enron liquidation veteran John J. Ray III said in a statement on Saturday.

Among those with the largest identified financial positions are FTX EU Ltd., at $49.4 million in total cash available, and West Realm Shires Services — which encompasses the FTX.US crypto exchange as well as some acquisitions — at $48.1 million, a filing in Delaware on Saturday showed. FTX Ventures, which launched a $2 billion fund in January, had less than $800,000 in available cash, it said.

In the filing, FTX said that the positions were calculated based on verifiable available books and records for the businesses. More than half of identified bank accounts have yet to have their balances verified and other accounts may exist, given the group’s “historical cash management failures and the deficiency of documentation controls.”

Separately, the bankrupt FTX companies, known as FTX Debtors, have engaged Perella Weinberg as lead investment bank and started preparing some assets for sale or reorganization, according to the statement.

Ray further commented, “I have instructed the team at the FTX Debtors to prioritize the preservation of franchise value as best we can in these difficult circumstances. I respectfully ask all of our employees, vendors, customers, regulators and government stakeholders to be patient with us as we put in place the arrangements that corporate governance failures at FTX prevented us from putting in place prior to filing our chapter 11 cases.”

Also on Saturday, the FTX Debtors filed various motions with the Bankruptcy Court “seeking interim relief from the Court that, if granted, would allow the operation of a new global cash management system and the ordinary course payment critical vendors and vendors at foreign subsidiaries,” it said. The first official bankruptcy court hearing has been scheduled for Nov. 22, at 11:00 a.m. before Judge T. Dorsey at the United States Bankruptcy Court for the District of Delaware, 824 North Market Street, 5th Floor, Courtroom No. 5, Wilmington, Delaware

Ray, who oversaw the liquidation of Enron Corp., said earlier this week in a sworn declaration that he’d never seen “such a complete failure of corporate controls and such a complete absence of trustworthy financial information.” He called the chaos around the collapse “unprecedented.”

And speaking of unprecedented, just days after FTX’s lawyers accused Bankman-Fried of undermining the bankruptcy case in their First Day Affidavit… 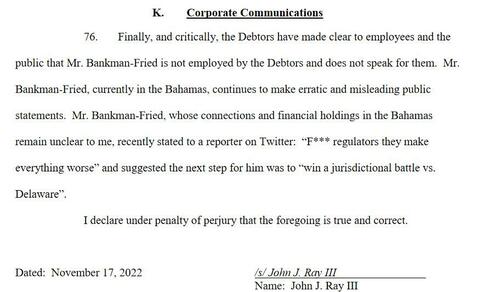 … Paul, Weiss, the law firm hired by SBF, effectively fired him as a client, citing a conflict of interest.

“We informed Mr. Bankman-Fried several days ago, after the filing of the FTX bankruptcy, that conflicts have arisen that precluded us from representing him” Paul Weiss counsel Martin Flumenbaum said in a statement, although he declined to describe the conflicts.

While unclear what the catalyst was, starting on Nov. 14, SBF published a series of self-incriminating tweets that sparked a frenzy across Crypto Twitter, which would have made his defense extremely difficult for any law firm. In a conversation with the ultra-liberal outlet Vox – which sold SBF out after writing fawning praise about the prominent Democrat donor for months – and which was published this week, Bankman-Fried blamed FTX’s collapse in part on “messy accounting,” expressed regret at his decision to file for bankruptcy and denigrated U.S. regulators in profane terms. He later said he did not intend for the conversation to be made public.

The biggest con man since Madoff just admitted that woke is a virtue-signaling game “where we say all the right shibboleths and so everyone likes us.” How stupid does the NYT feel now? pic.twitter.com/L92CmG1hVJ

Flumenbaum is a longtime litigator whose past clients include the junk-bond trader Michael Milken and AIG. He currently represents Christian Larsen, the chairman of the Ripple Labs crypto exchange. However SBF proved to be too much of a liability for someone defending such iconic criminals as Mike Milken. Then again, Paul Weiss quitting is not all that much of a shock amid growing speculation that the increasingly erratic SBF – who was convinced his millions in donations to the Democratic party would render him immune from legal challenges – would be indefensible in court.

“There’s this old saying that a lawyer who represents himself has a fool for a client. The reverse is also true. An individual who is the subject of an investigation and tries to defend themselves in the court of public opinion has a fool for a lawyer,” said Justin Danilewitz, a white-collar defense lawyer at law firm Saul Ewing Arnstein & Lehr.

According to media report, Bankman-Fried is now represented by Greg Joseph, former president of the American College of Trial Lawyers. Also on his legal team as an advisor is David W. Mills, who teaches criminal law at Stanford Law School, where Bankman-Fried’s parents are both professors.

Of course, all this legal wrangling may be for nothing: after all, SBF still hasn’t been accused of a crime, and it may just be that with the bribes he paid to prominent Democrats, ultimately helping Biden get elected…

… that the 30-year-old will be able to avoid seeing the inside of a courtroom entirely.