Sam Frost and the WestMinster Confession of Faith

In night three of a three day debate with former Preterist Sam Frost, he repeatedly stated that he stands with the scholarship and history of the church, whereas Preston stands opposed to that unbroken history. The undeniable fact is that, as I pointed out in the debate, and Frost said literally not a word in response, he takes positions on critical eschatological texts that the historical church has never taken, has never taught! Thus, as I said repeatedly in that debate, if Frost is right on these fundamental eschatological texts then the church has been wrong for the last 2000 years, and Sam Frost alone has been right! The key texts involved are 2 Thessalonians 1 & 2. The debate is archived on www.ironsharpensironradioshow.com.

2 Thessalonians 1– Sam Frost does not believe– and stated publically in that debate – that 2 Thessalonians 1 is not a prediction of the Second Coming! To say that this stands in diametric opposition of the historical and creedal view of that text is stunning!

Now, what is interesting is that some Postmillennialists, such as Gary DeMar, believe – as I do – that 2 Thessalonians 1 was a prediction of the AD 70 coming of Christ to judge Israel for killing the martyrs. See his 1994 version of Last Days Madness (p. 341). In addition, following the debate, in a FaceBook discussion of the first night of the debate, DeMar stated very clearly that he thought my exegesis of the text is correct. Nonetheless, the historical view of 2 Thessalonians 1 is that it most definitely predicted the Second Coming.

On night three of our debate, I made the comment that Frost stands opposed to the eschatology of even the Westminster Confession of Faith. Keep in mind that Frost claims to be “Reformed.” Frost denied this, stating that, like the Confession, he holds to the personal, bodily, visible return of Christ on the last day.

Of course, this sounded good as a debate response. The trouble is that Frost was being less than candid. Yes, he does agree with the Confession on those points, but, to my knowledge he clearly does NOT stand with the Confession in regard to a critical eschatological tenet. Here is the citation from the Westminister Confession, 25:6:

vi. There is no other head of the Church but the Lord Jesus Christ; nor can the Pope of Rome, in any sense, be head thereof; but is that Antichrist, that man of sin, and son of perdition, that exalts himself, in the Church, against Christ and all that is called God.

As Christ would have us to be certainly persuaded that there shall be a day of judgment, both to deter all men from sin; and for the greater consolation of the godly in their adversity:(1) so will He have that day unknown to men, that they may shake off all carnal security, and be prepared to say, Come Lord Jesus, come quickly, Amen.(2)

Please take note of the references that they give in support of the (supposedly) future Day of judgment. Among them is 2 Thessalonians 1:5-7, the very text that Frost denies refers to the Second Coming! (I will not comment on the miscarriage of exegesis committed by the WCF in their application of these passages to the future. Suffice it to say, they have grossly abused proper hermeneutic).

So, when we look closely at Sam Frost’s claim to stand in full agreement with the Westminster Confession of Faith, we find that claim to be false. That is….

✱ Unless he has – since our debate – changed his views again and has come to believe that 2 Thessalonians 2 did, after all, refer to things that were to come, and not things that had already happened. Or, he must surrender his (truly aberrant) claim that Paul was trying to refute the idea that the Man of Sin had to come before the Day of the Lord!

It is patently clear therefore, that when Frost claims to stand fully with the Westminster Confession of Faith in regard to eschatology, that claim is false. And let’s be clear, to be wrong on the two key texts noted above, is to be wrong on some of Paul’s foundational eschatological texts! These are not peripheral, “obscure,” or secondary passages, but, passages that have been used for two millennia to support the idea of a yet future coming of the Lord.

If Frost is wrong on these texts – and he is – his entire eschatology is falsified. If Frost is right on these texts, then as stated above, 2000 years of church history, including the creeds, have been wrong. Sam Frost thus sets himself up in direct violation of church history and the creeds, all the while claiming that he stands in conformity with them– and condemning preterists for opposing that very history and the creeds.

Why Did Steven See Jesus Standing- Not Sitting? 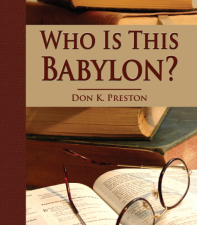 Guest Article by Gary DeMar: What Does 1 Peter 4:7 Mean?