In the days following the quarter-end burst to almost $1 trillion, usage of the Fed’s infamous overnight reverse repo facility had shrunk by roughly $200BN, gravitating in the $750BN – $800BN range, until today when 71 counterparties parked $860.5BN worth of reserves at the Fed, the second highest amount on record. 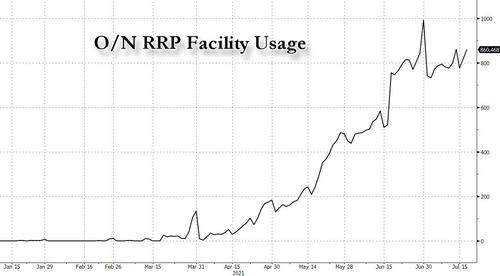 But despite renewed expectations that this latest push will finally send total RRP activity above $1 trillion as banks seek to park excess reserves/deposits anywhere but in the economy and/or markets, Curvature’s Scott Skyrm disagrees, pointing to one notable change: the surge in yields.

As Skyrm writes in his latest Repo Market Commentary “with the stock market sell-off and the bond market rally, it only means one thing! A flight-to-quality.” This matters because traditionally “a flight-to-quality will affect the Repo market by removing securities from the market.”

And as “end buyers” purchase Treasurys and pack them away in their portfolios, “it means less collateral in the market” (reserves, i.e., cash, is what banks use to buy TSYs with, or – in the case of JPMorgan – not buy TSYs with as discussed earlier).  Skyrm then writes that historically a large percentage of the securities purchased are the on-the-run issues, so “given the slow summer weeks and large issue sizes, I don’t expect Repo market activity to increase substantially.”

However, after a sleepy August, if volatility continues into the refunding and if yields reverse course and collateral is once again dumped, Skyrm warns that “we could have a pretty active August.”

Not everyone agrees with this take: according to interbroker dealer Wrightson ICAP, RRP volumes could return to the $900 billion level by Wednesday or Thursday.

But the biggest reason why many expect the RRP balance to explode in the next 10 days is because in May, the Treasury forecast that its cash balance on July 31 will drop to $450 billion; it was $698 billion on July 16, meaning that the Treasury will have to drain $250 billion in cash from the Treasury General Account, with the resultant reserves likely getting parked immediately at the Fed’s repo facility… 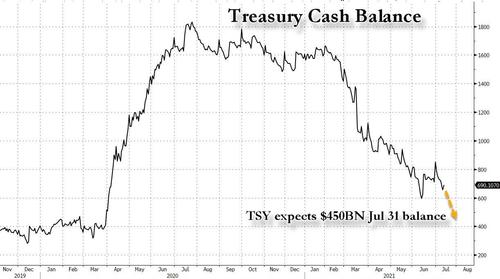 … unless of course the Fed makes equities eligible for CET1 coverage, encouraging banks to use Fed reserves to buy stocks outright instead of through market intermediaries.