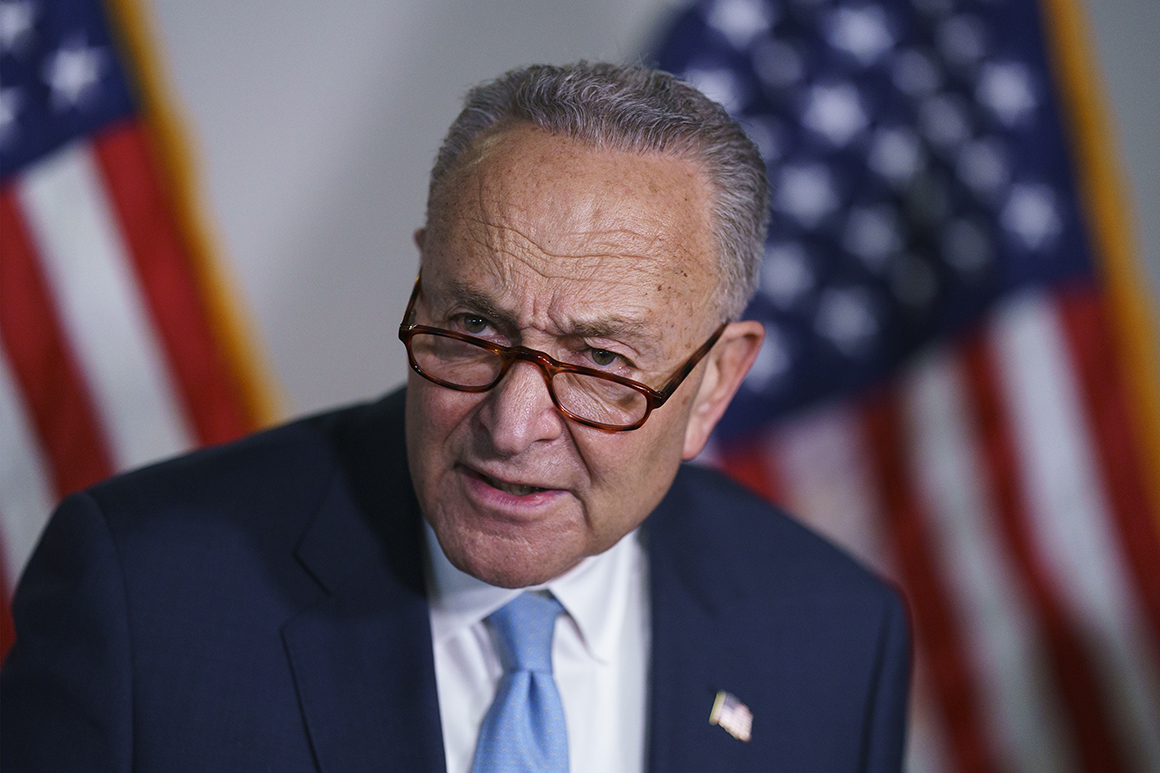 Combating China’s economic and geopolitical ambitions has long been a top priority for Senate Majority Leader Chuck Schumer, who reached an agreement earlier Thursday with Sen. Mike Crapo (R-Idaho) on a bipartisan trade proposal that allowed the chamber to break a filibuster of the underlying bill.

The China measure could be the final major bipartisan victory the Senate can achieve this year, with several cross-aisle negotiations on other major issues stalling. And it’s one that uniquely addresses challenges in foreign affairs, trade policy, scientific research and technology all in one legislative package.

The bill, dubbed the U.S. Innovation and Competition Act, S. 1260 (117), would sets aside more than $250 billion in new funding for research grants and semiconductor production, where Beijing is outpacing the U.S. The measure’s goal is to counter China’s economic rise by helping U.S. companies compete better with Chinese output, as well as develop a strategy to deal with the myriad national-security threats from Beijing.

“Everyone knows the federal government’s commitment to science and technology has been slipping for decades,” Schumer said. “We’ve been complacent at the top of the global heap, and our position as the world’s economic leader is teetering.”

Indeed, over the past two weeks, Schumer allowed more than a dozen amendments to get roll-call votes on the Senate floor, most of which were authored by Republicans — a significant departure from the chamber’s culture during the Trump administration, when amendment votes were a rarity.

“This is the way that the Senate was supposed to work where you join together and you find a bipartisan approach,” Sen. Mike Rounds (R-S.D.) said.

Schumer’s GOP counterpart on the year-long effort, Sen. Todd Young (R-Ind.), earlier complimented the majority leader on how he handled the process, telling POLITICO that Schumer “kept his word.”

Republicans were still pushing for additional amendment votes on Thursday morning, including the Crapo-led effort, which was eventually adopted.

“I told Sen. Schumer, ‘If you want to get cloture on this bill we just need more amendments.’ He said, ‘Well, you’ve had a lot of amendments.’ And I said, ‘Not as many as we want,’” Sen. John Cornyn (R-Texas), a top ally of Senate Minority Leader Mitch McConnell, said before Thursday’s votes on the amendments.

Schumer defended the process, contending that he has already allowed for more amendment votes in his nascent tenure as majority leader than McConnell did during the last four years when the Kentucky Republican held the Senate’s top job.

“Here on the floor, we’ve held the kind of vigorous, bipartisan, open amendment process that senators have been calling for,” Schumer said. “Some of these votes were tough for our side. In the old days, we would have said no. We said yes, we’ll vote for them.”

There has long been broad agreement among senators from both parties that the U.S. should be doing more to blunt China’s global influence and its malign behavior in various sectors, including its theft of intellectual property and its human-rights abuses against Uyghur Muslims in the Xinjiang region of China.

“The Chinese Communist Party plans to exploit our difficulties and divisions,” Young warned. “Their power and their capabilities are growing.”

Several Republicans vocally opposed the bill despite the Crapo-Schumer deal, and some blamed their party’s leadership for how the process was handled. They said GOP leaders should have held firm for additional amendment votes.

“We did a piss-poor job of negotiating this,” Sen. John Kennedy (R-La.) said. Schumer is “running around like a five-year-old in a Batman costume, he’s so excited.”

To gain Crapo’s support and break a filibuster, Schumer allowed a vote on his amendment to renew expired tariff exemption programs.

That amendment, authored with Senate Finance Chair Ron Wyden (D-Ore.), would also reopen a process for companies to apply for exemptions from tariffs that former President Donald Trump imposed on China. It passed 91-4.

In addition to voting on the trade amendment, Schumer also agreed to allow floor votes on other GOP priorities in return for Republicans voting to advance the bill.

An amendment from Sen. Marco Rubio (R-Fla.) that would have increased oversight of research money in the bill was rejected 55-40, unable to clear the requisite 60-vote threshold, over concerns it would delay funding distribution.

A proposal from Cornyn to strip prevailing wage requirements for projects funded by the bill’s $52 billion semiconductor manufacturing fund was slated to get a vote, too. Democrats attached that provision in the committee process and held firm amid GOP opposition.

The bill would also set aside nearly $40 billion over five years to boost the National Science Foundation and establish a new technology directorate tasked with confronting China.

Not everyone got an ornament on the legislative Christmas tree. Sen. Bernie Sanders (I-Vt.) voted against advancing the bill on Thursday when he could not get a vote on his amendment to strip a $10 billion NASA lunar lander program from the bill.

Sanders and other critics say that money will likely be awarded to Blue Origin, a space start-up owned by Amazon’s Jeff Bezos. But Sen. Maria Cantwell (D-Wash.), who backed the measure and whose state houses the company, said it was needed to ensure competition in lunar landing contracts.

Burgess Everett contributed to this report.