Authored by Joseph Lord via The Epoch Times,

The U.S. Senate on May 19 voted to pass a $40 billion aid package to Ukraine, overruling the objections of a few scattered Republican voices who had opposed the bill. 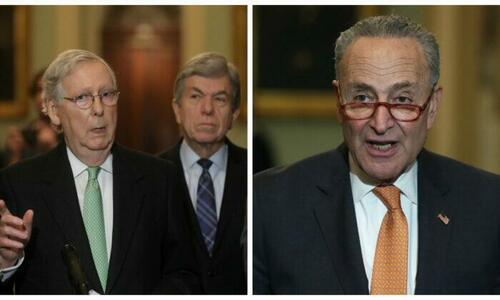 The 86–11 vote saw members of both parties join in support of the legislation, which had previously stalled due to objections from Sen. Rand Paul (R-Ky.).

All 11 ‘no’ votes were Republicans:

Biden’s request included $20.4 billion in military assistance along with $8.5 billion in economic assistance. The package also included $3 billion in humanitarian assistance to address food shortages around the globe. Ultimately, the proposal would have cost American taxpayers about $33 billion.

“The cost of this fight is not cheap, but caving to aggression is going to be more costly if we allow it to happen,” Biden said during a live address on April 28.

“We either back the Ukrainian people as they defend their country, or we stand by as the Russians continue their atrocities and aggression in Ukraine.”

Later, lawmakers added about $3.4 billion to the humanitarian and military aid components of the bill, but the legislation quickly got bogged down in partisan disputes.

The bill, the latest in a series of billion-dollar aid packages to the European nation, was blocked by Paul on May 11, even though House and Senate leaders were unanimous in their agreement to proceed with passing the package.

Paul refused to advance the bill until changes were made to the legislation that would ensure an inspector general could monitor exactly how the billions of dollars were being spent.

Paul noted that inflation “doesn’t just come out of nowhere” while pointing to deficit spending, noting that the United States spent almost $5 trillion on “COVID-19 bailouts” which have led to sky-high levels of inflation.

“Americans are feeling the pain, and Congress seems intent only on adding to that pain by shoveling more money out the door as fast as they can,” Paul said.

Following Paul’s successful effort to temporarily halt the bill, Senate Minority Leader Mitch McConnell (R-Ky.) promised Ukrainian leaders during a weekend visit to Kyiv that the bill would still pass with the support of an “overwhelming majority of Republicans in Congress.”

In comments on May 15 following his visit to Ukraine, McConnell blasted Paul as an “isolationist.”

“There have always been isolationist voices in the Republican Party,” McConnell said.

“I think one of the lessons we learned in World War II is not standing up to aggression early is a huge mistake.”

Though Democrats have been consistent in their support for sending aid to Ukraine, some Republicans in both chambers of Congress have urged caution as the U.S. national debt creeps toward $30.5 trillion and the federal spending deficit exceeds $2 trillion per year.

“I think it’s important to know that we don’t have any money to send. I mean, we have to borrow the money from China to send it to Ukraine,” Paul said in a May 18 interview with Breitbart.

“And I think most people kind of get that, and many Republicans will say that and understand it when it’s a new social program, but if it’s military aid to a country, they’re like, ‘Well, we can borrow that. That’s a justified borrowing.’”

Sen. Bill Hagerty (R-Tenn.) shared similar concerns in an interview with Fox News the weekend before the final vote.

“I certainly don’t have anything against the Ukrainians,” he said.

“We want to see them win, but pumping more aid into that country when we’re not taking care of our own country—the best thing that Biden could do is stop the war that he’s waged on American industry.”

I’m voting against the Ukraine aid bill. We have crises erupting across the nation—mothers can’t get formula. Illegal drugs are flowing across our open border. Crime’s running rampant. Yet we’re rushing to put more aid into another country when we’re not taking care of our own. pic.twitter.com/1XuZwWH50X

When the same bill came to the House last week, 57 Republicans opposed the bill, expressing concerns over the cost and focus of the bill as Americans grapple with an array of domestic issues.

“That bill does things we should not be doing,” Rep. Marjorie Taylor Greene (R-Ga.) wrote in a May 11 tweet indicative of general House GOP concerns with the bill.

“Americans are suffering from a baby formula crisis, a border crisis, skyrocketing inflation and fuel crisis, and they are fed up with America last politicians.”

However, Democrats and many Republicans have treated the aid as essential to stave off further aggression by Russia and other U.S. adversaries.

“Ukraine needs all the help it can get and, at the same time, we need all the assets we can put together to give Ukraine the aid it needs,” Senate Majority Leader Chuck Schumer (D-N.Y.) said of the bill earlier in May.

“In just a few moments, the Senate will pass H.R. 7691, an emergency supplemental to provide funding to Ukraine and to stem the global hunger crisis exacerbated by Vladimir Putin’s unprovoked war,” Senate president pro tempore Patrick Leahy (D-Vt.) said in a statement. “It is a shame that because of the actions of one Senator we could not pass this urgently needed bill, which will receive overwhelming bipartisan support, last week. To confront Vladimir Putin on the global stage, we must stand united.”

“Make no mistake: Putin is a threat,” Sen. Chuck Grassley (R-Iowa) wrote in a May 19 tweet. “Just as Biden admin’s failure to secure the southern border has encouraged more illegal immigration failing to support Ukraine’s sovereignty will only encourage further aggression by Russia [and] embolden others like China.”

“Putin must see an unending commitment by the West to supply weapons to the Ukrainian military, and the Ukrainian people must see that the freedom-loving world is with them,” Graham wrote in a tweet.

The aid bill was approved just days after Ukrainian forces surrendered to Russia in Mariupol, effectively ending the 82-day armed conflict between the two nations and marking a significant defeat for Ukraine.