Multiple pro-Moscow officials in Ukraine on Tuesday announced their intent to stage referendums on joining Russia, including the head of the Donetsk People’s Republic Denis Pushilin, as well as the Russia-installed official over the southern Kherson region, Vladimir Saldo. “I think that people have long been waiting for a referendum here and it will probably be a political move that will help ensure the safety of civilians,” Pushillin said Tuesday.

The neighboring Luhansk People’s Republic, where fierce battles took place ahead of and into the summer wherein Russia definitively gobbled up most territory, has also adopted a law on holding a vote, now announced for September 23-27.

Bloomberg in reporting the announcement suggests that Ukraine’s counteroffensive in the east may have actually hastened Moscow’s timeline on annexation:

The Kremlin is moving hastily to stage sham votes on annexing the regions of Ukraine its forces still control, after Kyiv’s military drove Russian troops from large areas of territory taken in their seven-month-old invasion. The so-called Luhansk People’s Republic may hold its vote as soon as this weekend, Interfax quoted a senior legislator as saying Tuesday.

Kherson region’s Vladimir Saldo too said that “the leadership of the Kherson region administration decided to prepare and hold a referendum” after what he described as a public appeal, saying in a video message:

“We have set a course for reunification, a return to Russia. And we will not turn away from it.”

As for the two self-proclaimed republics in the Donbas, this has long been seen as perhaps inevitable since the war began, but even partially Russian-controlled Zaporizhzhia region has seen pro-Russian officials already talking about a referendum, based on the “We are together with Russia” movement.

Kremlin officials have long been on record as saying Ukrainian regions which hold a referendum vote in the affirmative will be recognized and granted admission to the Russian Federation. At the same time Ukrainian President Volodymyr Zelensky has vowed his forces will not stop fighting until every inch of Ukraine territory is liberated, including even the Crimea – under Russian control since 2014. The hardening of resolve on both sides have made negotiations essentially impossible at this point. 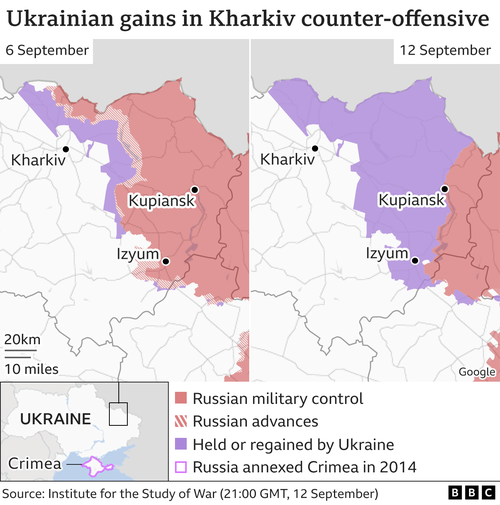 Referendums in occupied territory will further ensure the warring sides deem direct talks as not a real option. Bloomberg notes further of how the referendums are likely to change the battlefield dynamic:

By making the occupied zones formally part of Russia under the country’s laws, the votes may also allow the Kremlin to deploy conscript troops there, in addition to the current force of contract soldiers and military contractors.

Dmitry Medvedev, the deputy head of Russia’s Security Council, said that the referendums will result in greater protection of residents from Ukrainian attacks. “Encroachment onto the territory of Russia is a crime which allows you to use all self-defense forces,” he said on Telegram.

So far in the Donbas – in the DPR and LPR regions – the main fighting forces have been the pro-Russian separatist militias. Making these Russian territory opens the door for ‘legal’ (in Moscow’s eyes) entry of regular conscripts and even permanent military bases.

Meanwhile, amid reported devastating losses and a general pullback from positions near Kharkiv, Russia is believed to be on the brink of major escalation…

Looks like Russia may be ready to take things up a gear in Ukraine.

The Duma just passed a bill introducing the concepts of “mobilization” and “martial law” into law. The upper house could approve it tomorrow, after which Putin will sign it.https://t.co/AcyPw45HLW

Throughout this month there have been persisting rumors that Putin could be ready to formally declare a state of war against Ukraine. State media sources are on Tuesday reporting that Russian parliament appears to be taking legal steps to pave the way for national mobilization of forces:

The State Duma immediately in the second and third readings unanimously approved the amendments, including the introduction of the concepts of “mobilization” and “wartime” into the Criminal Code, as well as establishing responsibility for looting and voluntary surrender.

Given the series of occupied Ukraine regions now declaring intent to hold referendums, coming just as news of these key changes being pushed through the State Duma emerge on Tuesday, it does seem Russia is about to quickly “answer” the ongoing Ukraine counteroffensive in a dramatic way.

Margarita Simonyan, the Editor-in-chief of state-funded RT news, made the following ominous prediction: “By what is happening and still about to happen, this week marks either the eve of our imminent victory, or the eve of nuclear war. I can’t see anything third.”

46 mins ago
‘Many Turn To Christ At Queen’s Funeral’

46 mins ago
‘Many Turn To Christ At Queen’s Funeral’